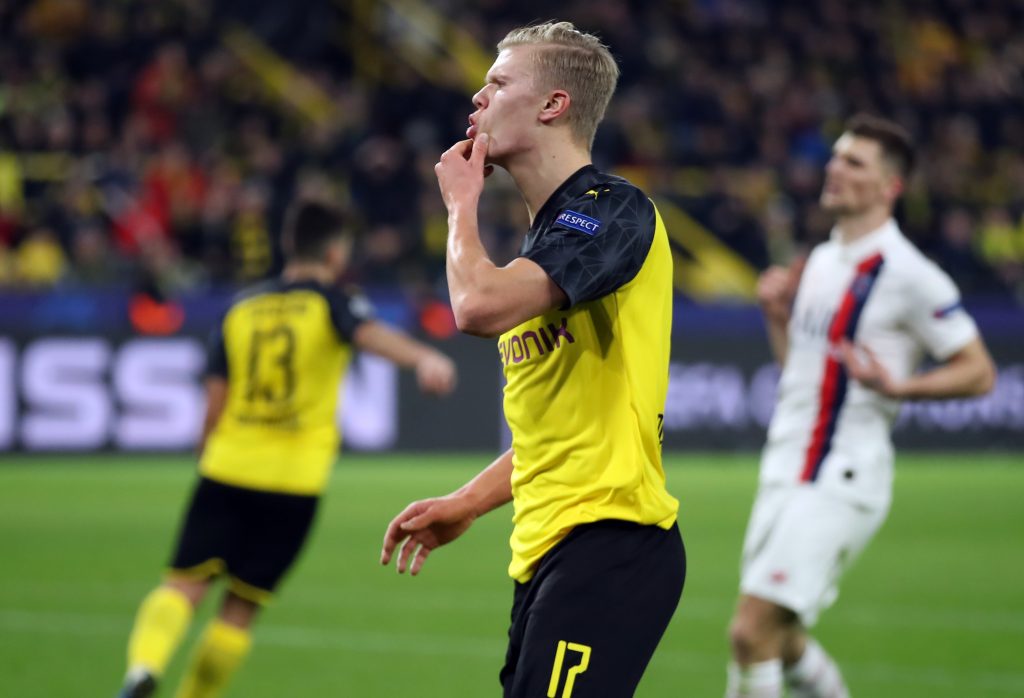 Borussia Dortmund won 2-1 against French champions Paris Saint-Germain in the first leg of the Champions League round of 16 on Tuesday night.

Once again, 19-year-old Erling Haaland took the centre stage. The youngster just can’t stop scoring at the moment, and bagged a brace against the French giants.

His first goal was a predatory finish after Raphael Guerreiro’s shot was blocked and the second was a left-footed thunderbolt from 20 yards.

Haaland’s performance has caused a stir on social media and especially among the Manchester United fans.

The Athletic journalist Sam Pilger has tweeted that it’s ‘uncomfortable’ to watch Haaland performing so well at Dortmund.

It is uncomfortable for #MUFC to watch Haaland’s impact at Dortmund, but they had to refuse a release clause in his contract, as they would have lost all control over his future. It would have made him a short-term player who could be sold without their permission.

Manchester United were heavily linked with a move for the youngster, but the Red Devils refused to agree any release clause in his contract as this would mean they would have lost control over his future.

He went on join to Dortmund in January from Red Bull Salzburg after the German giants agreed to meet his 20m euro (£17.1m) buyout clause.

Haaland has Mino Raiola as his agent, and United fans are bitter against him given how he is plotting a potential exit for Paul Pogba from behind. Here are some of the selected tweets:

If he really has a £60m release clause in his contract, he'll be gone this summer nevermind the next.

I also think Utd decided to walk away form Raiola. The player himself probably would have went to Utd. Raiola also recently said he wouldn’t send any players to Utd.

I don't care if Haaland scores 100 times this season. I don't want any Raiola players at #MUFC after the circus he's brought with him. The club should make clear that if you have Raiola as an agent you will be sold and you will not play until we find a buyer who meets our value.

Yes and Haaland also needs a functioning midfield, defense and manager. So the idea that he would be banging in the goals at United, had we secured his services, is not as evident as it may seem.

Surely if you're United you just back yourselves to improve and therefore keep him long term? If they didn't sign him over a release clause that's a poor call.

He is an amazing player but 💯 the right long term decision

Need to stop all dealings with Raiola for the foreseeable future. Keep him out & concentrate on players who want to play for the club regardless of how their agent wants to plot their route to stardom.

Not what Riaola said..'no clauses' should not be uncomfortable for us he chose Dortmund for his career path Ole only wants players that want to be at #mufc

Manchester United went for him too late, and he was offered first-team football at Dortmund in January.

In the summer the biggest issues for Manchester United were: midfield, fullback, wide player, upfront (in that order). It is easy to say that United have missed out on a player when he’s doing so well, but there’s no guarantee about how his future would have shaped up (different system) especially with Raiola being his agent.