Barcelona cemented their position at the top of the La Liga table with a thumping 6-0 victory over Getafe at Camp Nou on Saturday afternoon.

Lionel Messi scored one, and directly set up three other goals as Barcelona go 8 points clear at the top of the La Liga table.

Here are all the results from Week 29 La Liga matches, followed by the updated standings, top scorers, and major talking points. 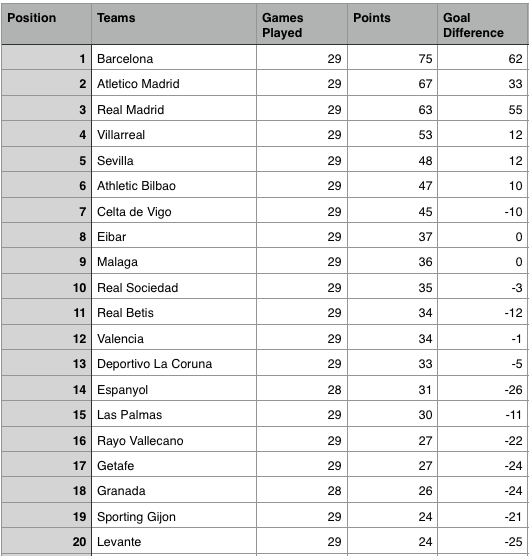 The Catalan giants are well on course to win their second La Liga title under Luis Enrique, after earning an emphatic 6-0 win over Getafe.

The Blaugrana have gone 37 games unbeaten, which is a record in itself, and it looks like, they are going to extend the run for a while. Lionel Messi produced yet another masterclass performance, and he scored one, made three for others and missed a penalty as well.

Probably one area that can called as a ‘weakness’ for this great Barcelona side is in their penalty taking department. While teams struggle to earn penalties, Barcelona squander them without any fuss. Probably, they should ask Javier Mascherano, who has yet to score for Barcelona since joining from Liverpool, to take the penalty taking duty next time.

Atletico have a great bunch of attacking players but somehow they fail to score more. From October to early part of January, they won most of their games by a single goal margin.

Towards the end of January, they have played with more freedom. The 2-1 defeat to Barcelona had put an end to their title hopes this season, and probably a reason they’re playing with no pressure at all.

They have scored three goals in each of their last three games. More of that same kind please, Rojiblancos!