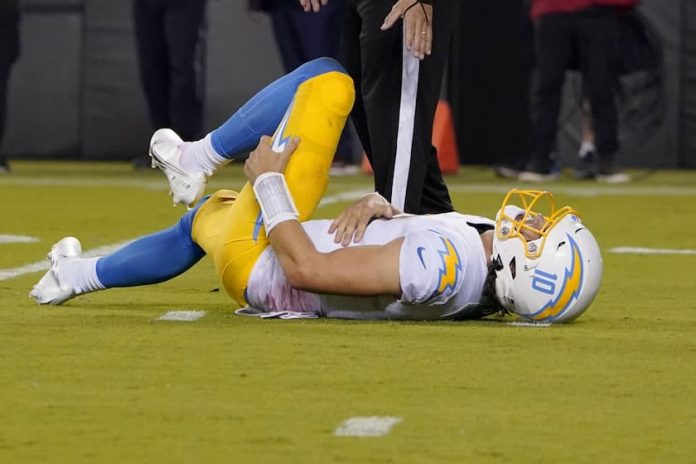 The LA Chargers quarterback was sent to get an X-ray following their loss to the Kansas City Chiefs.

During the fourth quarter Herbert appeared to be in pain following a hard hit from Chiefs linebacker Mike Danna whilst attempting a throw. After taking a short break on the sideline the quarterback returned to finish the match.

Following the game, Chargers head coach Brandon Staley said he doesn’t expect the injury to be an issue going forward and it is a possible rib injury following the collision. However, the QB is still required to get an X-ray to rule out further issues.

While Herbert was injured during the last quarter, he still managed to show his class. He managed to lead a nine-play, 73-yard drive and succeeded in providing a 7-yard touchdown to Josh Palmer.

Sadly, for Chargers fans this wasn’t enough to secure the win and Chief’s won the game 27-24. It came as a tough loss for the Chargers because they led in every quarter but the fourth, with Patrick Mahomes leading the Chiefs to a brilliant comeback.

Chargers’ fans will be glad that they now have a 9 day wait till their next match, hoping that’s enough time for Herbert to get fit to start against the Jaguars next Sunday.