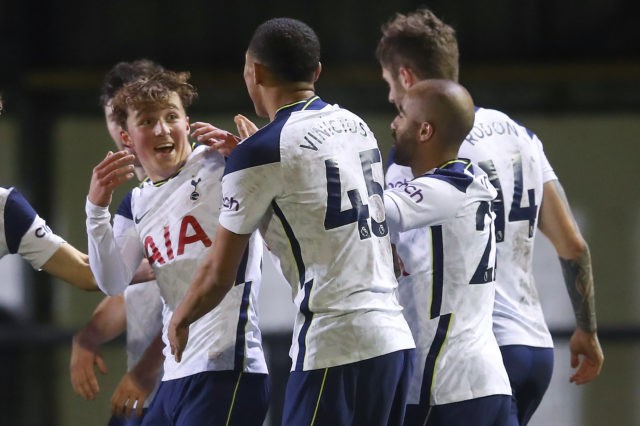 Tottenham Hotspur manager Jose Mourinho has revealed in his press conference today that he has sent Alfie Devine back to the academy.

Devine made his debut in the FA Cup victory over Marine on Sunday, where he broke two records for the club.

He became the youngest ever player to represent the Spurs senior team at just 16 years and 163 days old as he came on in the second half.

The record was previously held by Devine’s academy team-mate Dane Scarlett who featured in the Europa a couple of months back.

He became the club’s youngest ever goalscorer as well when he drilled home with a right-footed finish.

Mourinho, who was full of praise for Devine after the game, has revealed today that he has sent him back to the academy and does not want to see him for two to three weeks.

“I don’t know because I sent him back to the academy – when you reach that high moment now it’s time to go back to where he belongs and it’s time to calm down because as you say, lots of lights on him,” said Mourinho, as quoted by Football London.

“This is the moment to calm down and go back to the academy. I don’t want to see him for maybe one or two weeks. Let him be there.”

The youngster has been receiving glowing reviews from pundits and teammates, and Mourinho has done the right thing.

Spurs will face London rivals Fulham in the Premier League clash on Wednesday night, and Mourinho is set to name a strong squad.

Devine will continue to train with the first-squad at some point, but it’s important that he keeps his feet on the ground after such a fantastic debut.

He needs to cool himself down and keep himself motivated by training hard in the academy. Devine, who joined from Wigan Athletic in the summer, has got loads of potential and he will get more opportunities in the future if he keeps on improving.