Jordan Henderson may not be fit for the European Championships 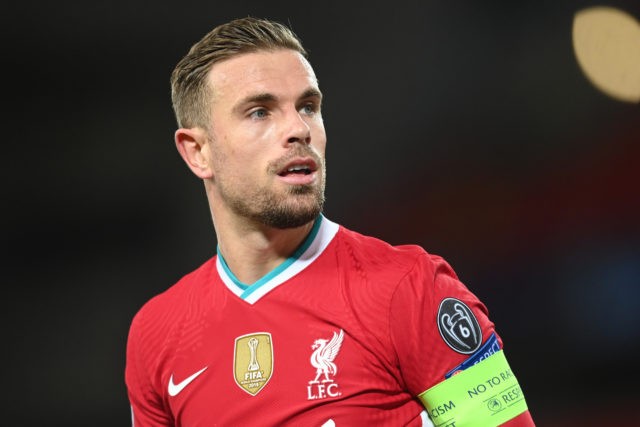 Gareth Southgate has confirmed that he is unsure whether Jordan Henderson will be fit for the delayed 2020 European Championship tournament.

The Liverpool captain suffered a serious groin injury in the Merseyside derby on February 20. Per Sky Sports, he was expected to be ruled out for a minimum of five weeks following surgery to fix the issue.

However, his international coach has now hinted that he may be absent for much longer.

Speaking ahead of the Three Lions’ game against Albania on Sunday, Southgate said: “We know it’s going to be close to the end of the season, and we will have to see how it goes.

“In terms of promises, we can only say that Hendo himself is very optimistic about how the operation went.

“There are a lot of things to take into consideration but, at the moment, that is a decision that is a few weeks away.”

Henderson a major loss for club and country

If Henderson does miss out on a place in the Euros squad, he will be a massive miss for his country.

When fit, Henderson is the best midfielder that England have. His ability to play as both a No 6 and No 8 is unmatched in the current squad.

However, Liverpool fans are likely to be even more worried by this news. Their captain is one of their most important players, and the team is not the same without him.

A top four place is seemingly out of the question at this stage. Liverpool must win the Champions League if they want to feature in the competition again next season.

Henderson being available for the run-in would improve Jurgen Klopp’s side’s chances of winning the competition tenfold.

The Reds face Real Madrid in the quarter-final before a possible semi-final against either Chelsea or Porto.

With their three first-choice centre-backs out for the season, Henderson must get back on the pitch as soon as possible.

Along with Thiago and Fabinho, Henderson could form a truly elite midfield three. This would make up for the deficiencies in defence.

Otherwise, it is tough to see the Merseysiders challenging for the biggest prize in club football this season.

Read: Liverpool’s attack must move on from the false 9.