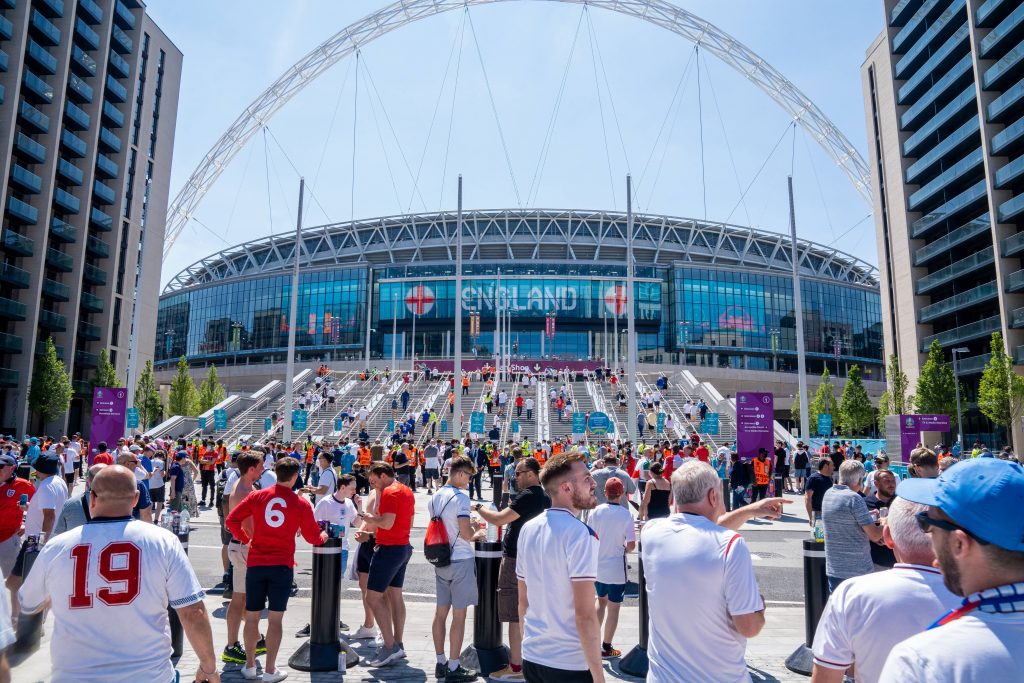 As the group stage of Euro 2020 reached its conclusion, teams discovered their fate and England’s ‘path to glory’ was revealed starting with an old enemy at Wembley stadium next Tuesday.

Having topped Group D courtesy of a 1-0 victory over Czech Republic, the Three Lions sealed their own progress in style.

We now look at what will be needed to finally go all the way in a major international competition.

It was all eyes on group F for England following their own progression to find out their opponents in the first knockout round.

Before kick-off in those two final games (Germany vs Hungary and Portugal vs France) in the ‘group of death, the Three Lions knew that they would be at Wembley on Tuesday, June 29, with a 5.00 pm kick-off.

They also knew that there, they would face the team who eventually finished second in the group of death, but who exactly that would be wasn’t clear, and that remained the case right up until the full-time whistles at both the Allianz Arena and the Puskas Arena.

Ultimately, it would be Germany who finished second courtesy of a late equaliser against a valiant Hungary side, and a meeting between two old foes was set up at Wembley.

The encounter will be the first time since the semi-final of Euro ’96 that England and Germany have met in a major tournament at Wembley.

Of course, back then it was the old Wembley, and it was the Germans who reigned supreme following a penalty shootout.

Now England manager Gareth Southgate famously missed his spot-kick on that occasion to contribute to the home side’s downfall, and the ‘monkey’ has been on his back ever since.

Added to this, Germany came out on top the last time the pair met at a major tournament, with the 2010 World Cup game between the two – ending 4-1 to the Germans – most famously remembered for Frank Lampard’s ‘ghost goal’.

Many believe that if the goal had been given and England had been back on level terms, the tale could have been oh so different.

But history is the past, and to be successful in the round of 16 tie, Southgate’s side need to focus on the here and now.

They may well go into the game at Wembley as favourites, and why shouldn’t they? England are yet to concede in this tournament, albeit having only scored two goals themselves, which goes to show that the team know how to grind out results.

Arguably, many Three Lions players are yet to show their best at Euro 2020, including Harry Kane who failed to register a shot on target across their two opening group games before springing to life against Czech Republic and can think himself unlucky not to have scored.

Meanwhile, Germany really did struggle to get out of their group. Yes, it was the group of death, but Hungary had Joachim Low’s side on the ropes on more than one occasion, and France managed to nullify the Germans completely on the opening matchday.

If England are to be successful, they were always going to have to defeat at least one ‘big nation’ at some point and will be confident heading into this one.

Respect the opposition, but don’t let the occasion override your jobs on the pitch. With the home backing at Wembley behind Southgate’s team, this year could be the year that England finally succeed when put up against a historically strong nation.

Quarter-finals: Away from home for the only time in the tournament

Providing that England defeat Germany, they would progress through into the last eight of the tournament and would come up against either Sweden or Ukraine due to the way that the draw has fallen.

Having topped a group including both Spain and Poland, Sweden will be favoured to get the better of Ukraine, but England would head into the quarter-final as the favourites against either of the possible two opponents.

They triumphed over Sweden in the 2018 World Cup quarter-finals most recently and have only ever lost once to Ukraine, that during Fabio Capello’s reign.

Undoubtedly, history counts for little in major competitions though comparing England’s squad against Sweden and Ukraine, the Three Lions would come out on top in every department.

Keeping Alexander Isak and Emil Forsberg quiet would be the priority if Southgate’s men were to come up against the Swedes, as without those two, they would likely create very little.

The same can be said for Ukraine with Andriy Yarmolenko and Roman Yaremchuk. Defenders playing week in, week out in the Premier League should be able to contend with any of those four names quite comfortably.

This may well come back to bite, but if England do progress into the last eight of Euro 2020, there shouldn’t be any concern that they then don’t go on to the semi-finals with a routine victory against either the Swedes or Ukraine.

The only doubt comes from the fact that Southgate’s men would have to travel away from home for the first – and only – time in the tournament, with their potential quarter-final clash being played in Italy at the Stadio Olimpico (Rome) on Saturday, July 3, at 8.00 pm.

Not many other sides will have had the opportunity to play so many games at home in a row, so England can probably think themselves lucky.

Added to that, the modern-day footballer is so used to travelling about, the venue change really shouldn’t have too much of an impact.

Semi-finals: Back on home soil

As stated earlier, with their top-place finish in the group stages, England really have landed on the more favourable side of the draw.

They’ve managed to avoid any potential clashes with Belgium, Portugal, Italy, France and Spain until the final – if both England and one of those sides reach the final.

Let’s forget about that side of the draw until we have to worry about it and get ourselves through to a first major international final since 1966.

At Wembley again on Wednesday, July 7, (8.00 pm), the Three Lions would come up against one of Netherlands, Czech Republic, Wales and Denmark.

While most Englishmen and Welshmen would probably relish the opportunity to face one another in the semi-finals of Euro 2020, the likelihood of it happening isn’t huge.

Wales may well triumph over Denmark, but that game won’t be easy, especially not with an inspired team of Danes playing now for not only their country but the absent Christian Eriksen.

After that, the Netherlands probably await, as Memphis Depay and co could end up steamrolling the Czechs.

If that is the case, it’s hard to look past the Dutch. Historically successful and now with a good mix of experience and youth in their ranks, including promising young PSV Eindhoven defender Denzel Dumfries and veteran Gini Wijnaldum, who has recently signed for PSG following the expiration of his contract at Liverpool.

Consequently, it may well be the ‘Oranje’ who make their way to the new Wembley for just a fourth time since its opening in 2007 and for the first-ever time in a competitive match-up of any kind.

If that were to happen, it would be an action-packed encounter filled with attacking talent and two stubborn defences.

England would be able to take hope from some of the Dutch’s performances in the group stage.

They looked lethargic and bereft of ideas at times – perhaps a bit like Southgate’s side – but they got the job done in the end.

Without the influential Virgil Van Dijk at the back, England would have to adapt their style and become more physically dominant, although the skilful nature of both Phil Foden and Mason Mount could also cause opponents problems.

At the other end, the Three Lions’ defence would need to be on top form to keep Depay and co quiet but may be able to call upon previous experience in recent years to get through the game.

Two semi-finals have passed Southgate’s men by. Firstly, the Croatia defeat at the 2018 World Cup before a defeat in extra time to the Netherlands at the 2019 Nations League finals. Surely they must count for something in terms of managing the emotion of the occasion?

Repetitive but true, mentality is key in sport as a whole and England will need to be in the right mind frame to be successful at Euro 2020. Especially if they do reach the final…

All Potential Semi-Final Opponents: Netherlands or Czech Republic or Wales or Denmark

Providing that England do get to the last two, they really could face a strong team in it. On the opposite side of the draw, there will be some gripping games, and many may go the full difference to penalties, it’s that difficult to separate some teams.

Croatia, Switzerland and Austria probably aren’t strong enough in the current climate to be getting close to the last two, and while any of those could spring a surprise in the round of 16, the likelihood of them doing the same in the last eight is slim.

It probably does boil down to France and Italy in the other semi-final and choosing between them is an absolute nightmare, but the Italians could go through by the finest of margins.

‘The Italian job’ has worked a treat so far for former Manchester City manager Roberto Mancini. They’re now close to 30 games unbeaten under his stewardship and, at the time of writing, have won the last 11 in a row without conceding.

That is outstanding and, before Euro 2020 began, the Italians weren’t even amongst the favourites, which is frightening considering how good they have been in the group stages.

To triumph over Italy in a final, England may well have to come up with some ‘aggressor’ tactics, attempting to play the mind games with their opponents as well as requiring a Southgate tactical masterclass.

Chances would be few and far between, with the Three Lions defence needing to make sure that was also the case at the other end.

Every player would need to be at their best because against a team with the quality of Italy, it only takes one momentary lapse of concentration.

Just before Mancini’s arrival as the national team’s manager, the two nations did face off in a friendly at Wembley, with the scoreline ending 1-1.

That said, the Italians were fortunate with the late award of a penalty saving their skin courtesy of a VAR review back in the technology’s infancy.

All Potential Final Opponents: Belgium or Portugal or Italy or Austria or France or Switzerland or Croatia or Spain.