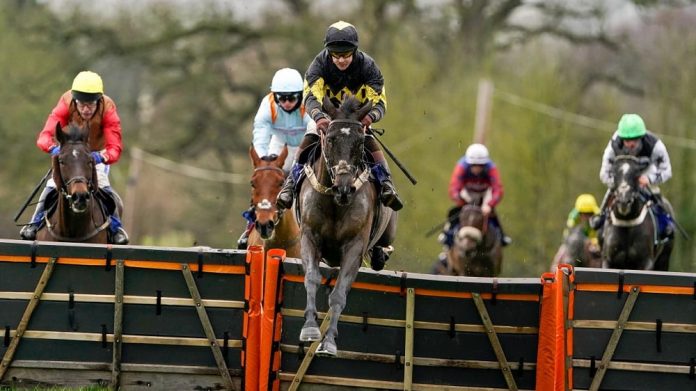 The big betting race of Super Saturday at Newbury is the extended 2m Grade Betfair Hurdle (3:35). This ultra-competitive Grade 3 handicap has a smaller field than usual due to the unseasonably pleasant weather. That has dried out the ground at Newbury with 14 declared this year. SportsLens experts have their shortlist of Betfair Hurdle tips for this feature contest.

But first, as always, some horse racing stats and trends for you. All recent Betfair Hurdle winners have been five or six-year-olds. This age profile may have something to do with the fact that six of the last eight victors were novices over hurdles. This race favours progressive horses that are ahead of the handicapper.

An official ratings band of 132-141 accounts for seven of the eight most recent winners. In theory, that should help punters narrow the field on horse racing betting apps and sportsbooks but there are always exceptions to any rule. Race-fit horses with two or more runs under their belt in the current campaign are ones to look for.

Coming to Newbury relatively fresh is a trend from the recent history of this race too. Five of the last six Betfair Hurdle winners were last in action between five and 10 weeks beforehand. Five of the last 10 favourites in the race delivered, meanwhile, but a smaller sample reveals three market leaders winning in the eight most recent renewals. Now, on with our Betfair Hurdle tips for this year!

Why Jpr One has prominent Betfair Hurdle odds

Colin Tizzard has never won this race before but, in Jpr One, he has a leading contender. Named after owner JP Romans, this five-year-old Court Cave gelding has the young, unexposed handicap debutant that is the ideal profile for the contest. All the top horse racing betting sites know it too, because Jpr One is prominent in the Betfair Hurdle betting here.

After beating the useful Persian War runner-up Luttrell Lad on his racecourse debut at Exeter, and those in-behind have won since, this horse was unlucky at Cheltenham. Jpr One went down fighting by a neck to Datsalrightgino with previous Grade 2 runner-up Washington 1 1/2 lengths down in third. The form of such Cheltenham results has been advertised by the fourth home, Socialist Agenda, who won his next two starts.

Jpr One has since come out and won as he should when sent off odds-on at Taunton. That qualified him for a handicap mark and a place in the Betfair Hurdle. He now makes his debut in this sphere off 130, just below what the ideal profile suggests. However, after just three career starts, Jpr One remains open to any amount of further progress.

His opening mark gives him a nice racing weight of 10st 9lb under Brendan Powell Jr here. That looks exploitable, considering Luttrell Lad’s rating is 135 and Exeter third I Am Maximus has 134 from the assessor. Virgin Bet and other top betting sites pay extra places here, so Jpr One looks a solid bet at 5/1.

Reasons to take on other prominent contenders

There is no clear favourite in the Betfair Hurdle odds at the time of writing but up there with Tizzard’s charge is Nicky Henderson runner Broomfield Burg. Owned by JP McManus, this six-year-old son of Sageburg won very easily at odds of 1/3 as horse racing results from the Christmas period show. The only other time Broomfield Burg has won over hurdles, he was 1/9.

Connections have also tried their luck in a handicap before and been beaten. That came despite Cheltenham odds of 5/2 conceding lumps of weight to the tune of almost two stone to Lively Citizen at the International Meeting back in December. The re-opposing third from that race is better off at the weights with Broomfield Burg too.

Given Henderson has trained five past Betfair Hurdle winners, this horse commands respect. There are reasons to take him on in more competitive waters, though, at best odds of 5/1. Also towards the head of the betting is last year’s victor Soaring Glory. Trained by Jonjo O’Neill, he’s a stone higher in the weights now but drops down in grade after a fine third at the highest level last time out.

Knappers Hill represents champion trainer Paul Nicholls, but the Ditcheat maestro has concerns about the yard. His stables didn’t send out any runners during the week leading up to this race as something hasn’t been right there. Knappers Hill, a six-year-old Valirann gelding, went unbeaten in bumpers and then landed his first two hurdles outing. He then finished a fine third in Grade 2 Kennel Gate at Ascot.

Both the winner and fourth have won since, so that seemingly gives the form a solid look. However, there was no pace angle in that race and they crawled around Ascot. It didn’t suit any of the horses, who all came from a bumper background. Taking that form at face value doesn’t look wise, so a 5lb rise to an opening handicap mark of 135 for Knappers Hill is difficult to assess. He’s a top price 15/2.

Harry Fry didn’t have soft enough ground to run Metier, so relies on Boothill back from chasing instead. This seven-year-old son of Presenting is a lightly-raced but fragile horse. Boothill is a standout 10/1 with Bet365 but that is plenty short enough.

Running for a smaller stable in the Betfair Hurdle, meanwhile, is Ryan Potter’s Jetoile. Another seven-year-old, but a gelding by Jeremy, this horse has an 8lb rise for his handicap debut for slogging through the mud in the Tolworth Hurdle at Sandown and chasing home Constitution Hill. This is very different going, so Jetoile is available at double figure prices.

Nobody has a better recent record in this than Nigel Twiston-Davies. Although a local trainer to Cheltenham, his Naunton stables have produced three of the last eight Betfair Hurdle winners. Representing the yard in this renewal is I Like To Move It, who already has a Grade 2 win under his belt.

A runner-up in the Listed bumper on this card last season, the five-year-old Trans Island gelding won his first three hurdles outings this term. I Like To Move It was the reluctant frontrunner in the slowly run Kennel Gate at Ascot off the back of his hat-trick. He also meets Tritonic off exactly the same terms from their Showcase Meeting clash at Cheltenham in October.

Given the yard’s fine record here, it may be well worthwhile forgiving I Like To Move It the run at Ascot. It wouldn’t be surprising if connections tried different tactics. When punters consider that Betfred pay five places on the Betfair Hurdle, I Like To Move It looks each way value at 10/1.

New Betfred.com or Betfred app customers only.The promotion is only available to customers from the UK (excluding Northern Ireland) from 12th January 2022 until terminated by Betfred. Customers must register using the promo code BETFRED60, deposit and place first bet of £10 or more on Sports.Customer’s first bet must be placed at a cumulative price of Evens (2.0) or greater. Any bet type will qualify but must have a total stake of at least £10. Customers must deposit and bet a minimum of £10 in one bet transaction at odds of even or greater. For example, two £5 single bets of evens or greater will not qualify as they are two separate bet transactions. Customer’s first bet must be settled within 7 days of registration in order to qualify for the promotion.