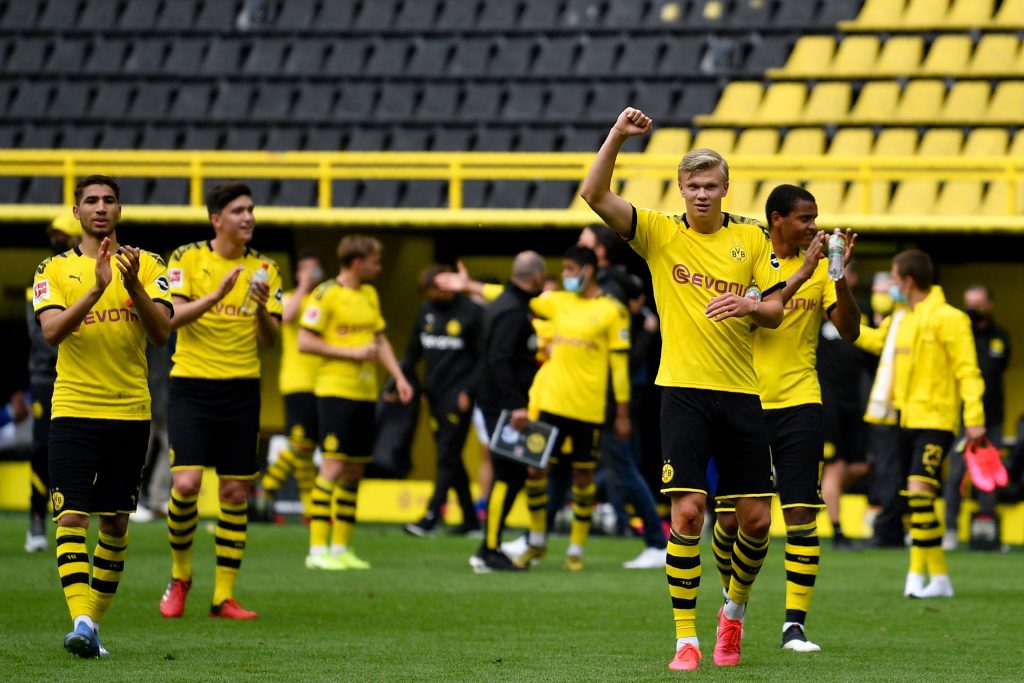 At the start it seemed that we would have a cracker on our hands. Schalke came close to breaking through the Dortmund defence in the first few minutes, but they couldn’t create a proper chance.

Dortmund grew into the game and pierced Schalke’s defence with some precise passing, ingenious touches and a clinical assist and finish. After that they never looked back.

Goals on either side of half-time saw them go clear. Schalke looked to get better after the third, but then Dortmund got a fourth goal through Raphael Guerreiro and the game was put to bed.

It didn’t seem to be much of a derby, let alone the mother of all derbies, but let’s be happy that there was a game in the first place.

The battle of the back 3s saw Dortmund emerge victorious. In the end, the game was won not by tactics, but by sheer quality. Dortmund were extremely clinical on the counter attacks, and Schalke were very blunt going forward. The game was decided there.

Wing-Backs – The Dortmund wing-backs were miles ahead of their Blue compatriots. Hakimi was a constant threat down the right and Guerreiro bagged a brace, whereas David Wagner is currently filling in a missing person report for Ozcipka and Kenny. The wings were very much covered in Yellow.

Erling Haaland vs Salif Sane – Sane was given the mammoth task of containing the beast, that is, Erling Braut Haaland. Though he was superior aerially, there was nothing he could do to stop the Norwegian machine from getting his customary goal.

Roman Burki – He was effectively the only spectator of the game. All he did was receive and make passes and he got a free clean sheet. 7.5.

Lukasz Piszczek – A solid performance from the stand-in captain. 7.5.

Mats Hummels – A rock in defence. He made all the crucial challenges and had a brilliant game. 8.5.

Achraf Hakimi – Ran riot in the right wing with his pace and crosses. Oczipka was no match for him. Peeled off slightly in the second half but that is acceptable considering the lack of football and the 4-0 lead. 8.

Raphael Guerreiro – Scored his first Bundesliga brace, and arguably could have had a hat-trick if he took his first chance. Excellent all-round. 8.5.

Thomas Delaney – Back from injury with a solid performance. Helped out defensively and did not let anyone past him. 7.5.

Mahmoud Dahoud – Ran the midfield for Dortmund with a solid display. 8.

Julian Brandt – Absolute class. Ran the attack for Dortmund and showed exceptional quality, especially with his outrageous flicks and passes. Man of the Match. 9.

Thorgan Hazard – Brilliant going forward, and capped it off with a goal and an assist. 8.75.

Erling Haaland – One chance, one goal. Nothing new here. 8.

Nothing really worth mentioning. Nice to see Schmelzer though.

Team – Solid team performance from the home side. Everyone played their role perfectly. Watching them you wouldn’t think that they hadn’t played for a couple months. 8.75

Markus Schubert – Not a great display. Made a mistake which led to the second goal and he could have arguably saved the third. 3.

Jean-Clair Todibo – Didn’t do much wrong but when you are a defender and concede four, it’s a bad day. 4.

Salif Sane – Did a decent job of containing Haaland and also tried to make something happen up front in the latter stages of the match. 5.5.

Jonjoe Kenny – Was nowhere near Guerreiro by any stretch of the imagination. 3.5.

Suat Serdar – Decent in midfield but not good enough to match Dahoud and Delaney. 5.

Weston McKennie – A spark of hope for Schalke in an otherwise dull performance. Tried his best to hold out against Dortmund in the middle of the park. 6.5.

Daniel Caligiuri – Got better in the second half but was really ineffective. 4.5.

Amine Harit – Tried his level best to do something but he was all alone. 5.5.

Rabbi Matondo – Was lively when he came on but soon waned after Dortmund got number four. 5.

Guido Burgstaller – Not more effective than Raman but slightly better. 4.

Team – After a half-decent start, they were fully overrun by Dortmund. They have a lot of work to do. 4.5.

Dortmund have managed to get their season off to the perfect restart with a thumping of their derby rivals. Although they are four points adrift off the league-leaders Bayern Munich, the team’s confidence and morale will be sky-rocketing.

With reports suggesting that their club captain Marco Reus may miss the rest of this season due to his adductor injury, Julian Brandt and Thorgan Hazard have seized the opportunity to prove that they are more than capable of filling his shoes in attack.

And we’ve not even mentioned Jadon Sancho. Things are starting to look good for Dortmund. The only negative? A bunch of their players are yet again being linked to moves away from the club:

As for their local rivals, the Royal Blues, things don’t look good. They got battered by the club that they and their fans hate the most. They have dropped two spots from the coveted Europa League position, and Hoffenheim are hot on their tails. Hopefully for them, this defeat might just be a wake-up call that this is serious business, and not a bunch of pre-season friendlies.

As for the Bundesliga and football, we know that the Geisterspiele (Ghost Game) is the way forward, so we should be ready to hear the players and managers screaming, and the winners celebrating like this: