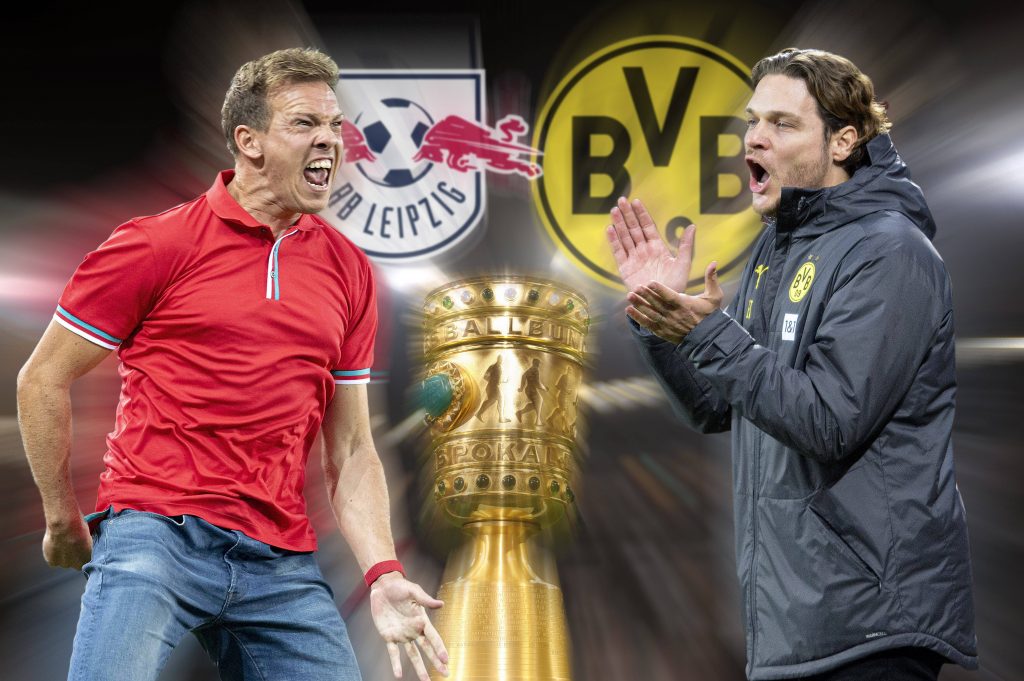 Olympiastadion is the venue as RB Leipzig and Borussia Dortmund contest in the DFB Pokal final on Thursday as both sides look to avoid a trophyless season.

Leipzig might be six points clear of Dortmund in the Bundesliga standings, but BVB make a strong case as favourites in this massive clash.

While the Saxons wobbled a bit of late, the North Rhine-Westphalia have hit the purple patch ahead of this duel, as witnessed by the weekend’s proceedings.

Yet, despite BVB’s win in their Bundesliga clash a few days ago, Leipzig might have saved the winning hand for the DFB Pokal showdown, which you can watch on several live football streaming sites.

Die Roten Bullen have coasted to the DFB Pokal final, having won their first four matches in the competition by an aggregate score of 12-0 before ousting Werder Bremen on penalties in the semi-finals.

However, Nagelsmann’s men have won just one of their last five competitive games within regulation time (D2, L2) despite keeping a clean sheet on three occasions.

Although Leipzig carry a reputation of a free-scoring side with ferocious firepower up front, they have scored under 1.5 goals in seven of their last ten outings in all competitions.

A 3-2 defeat at the Signal Iduna Park over the weekend saw Leipzig fail to beat Dortmund in a seventh consecutive meeting (D2, L5), last outscoring them in October 2017 under Ralph Hasenhuttl.

Despite boasting the best defensive record in the Bundesliga this season (28 goals shipped), the Red Bull outfit have let in 3+ goals in four of their last six matches against Dortmund.

Dortmund brushed aside second-tier outfit Holstein Kiel with an overwhelming 5-0 victory in the DFB Pokal semi-finals, which means four of their five triumphs in the competition this season were ‘to nil.’

Since exiting the Champions League to Manchester City back in March, Die Schwarzgelben have gone into overdrive, racking up a five-game winning streak in all competitions.

Terzic’s players have netted a staggering average of 3.16 goals per game in their last six outings across domestic competitions, with only Bayern Munich scoring more goals than Dortmund (69) in the Bundesliga this term.

Nine of Borussia’s last ten competitive fixtures have seen the opener scored by the 19th minute, highlighting the potential for plenty of early action.

This is Dortmund’s seventh appearance in the DFB Pokal final in the 21st century. They have lost four of the previous six, three of which to Bayern.

The two youngest coaches in Germany’s top-flight face off against each other in pursuit of their first taste of glory.

Julian Nagelsmann is desperate to bring Leipzig their first major trophy before departing for Bayern Munich in the summer.

But the 33-year-old will have to defy his Dortmund hoodoo to win his first title, having gathered a solitary point in his three encounters with BVB as a Leipzig coach.

Considering his results with TSG Hoffenheim, Naglesmann has claimed just one win in his ten matches against Dortmund (D4, L5), courtesy of a 3-1 victory with Die Kraichgauer in 2017/18.

On the other hand, Edin Terzic looks to lead his side to their first piece of silverware since 2017 before waving goodbye to the club at the end of the season.

Appointed in interim charge of the team following Lucien Favre’s sacking, Terzic has guided Dortmund back into the Bundesliga top-four and remains hopeful of landing a trophy before Marco Rose replaces him in the summer.

The 38-year-old outplayed Nagelsmann last weekend at the Signal Iduna Park, making it two from two against his Leipzig counterpart in the Bundesliga.