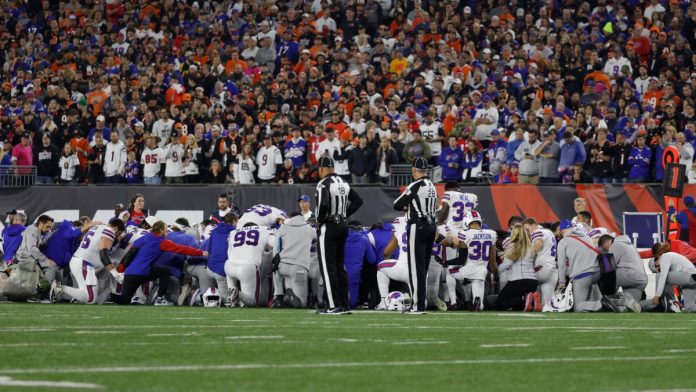 Buffalo Bills safety Damar Hamlin fell to the floor within the first quarter against the Cincinnati Bengals, causing the game to be suspended.

Following a hit on Bengals receiver Tee Higgins that appeared to impact with his chest, 24-year-old Hamlin clambered on to his feet, only to collapse moments later.

The Bills confirmed Hamlin went into cardiac arrest in a statement following the game, but it was clear from the on-field medical attention, which lasted nearly half an hour and required both CPR and oxygen, that a serious incident had occurred.

Everyone packed inside the Paul Brown Stadium were visibly distraught, and the Bills players and staff were seen embracing one another, coming together to form a human wall around Hamlin as the medical team tended to him in a heartwarming display of solidarity.

After exiting the field in an ambulance and being rushed to the University of Cincinnati Medical Center, the franchise later posted this update on Twitter in the early hours confirming the medical team has regained Hamlin’s heartbeat, but he remains in a critical condition.

Damar Hamlin suffered a cardiac arrest following a hit in our game versus the Bengals. His heartbeat was restored on the field and he was transferred to the UC Medical Center for further testing and treatment. He is currently sedated and listed in critical condition.

An outpouring of well-wishers from within the football world and beyond have swept across social media, with Kansas City Chiefs QB Patrick Mahomes and Arizona Cardinals defensive end JJ Watt both tweeting ‘please be okay.’

Despite some sickening concussion injuries this season, it is rare to see an NFL game suspended altogether which highlights the severity of the situation.

Both the Bills and the Bengals are battling once again to be Super Bowl contenders this season, and the build up to the match was palpable heading into a primetime Monday night slot with the league entering the final two weeks of the regular season.

Hamlin, a standout since his emergence at the University of Pittsburgh, was drafted by the Bills in the 2021 NFL draft. This season in particular, he has cemented his starting spot after spending the majority of last year as a reserve.