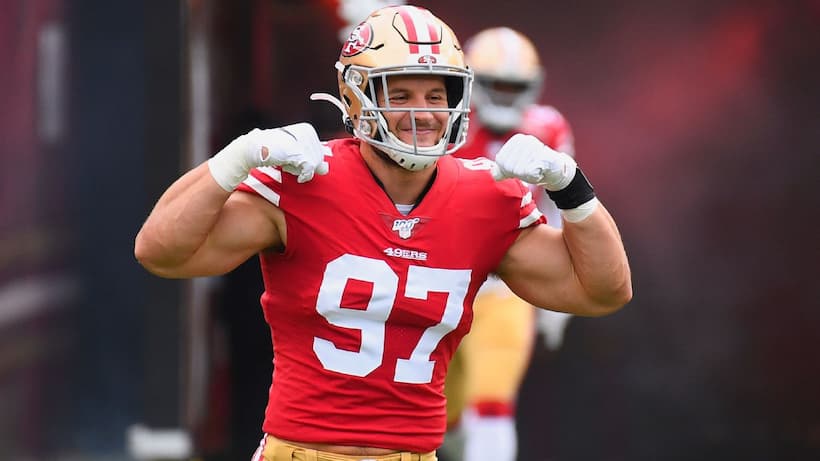 Only four more days until Sunday, which means it’s time to take a look at our football betting expert’s NFL Week-11 Picks. Plus, find out how Sportslens readers can claim up to a $2,500 welcome bonus at BetUS.

QB Jimmy Garoppolo has thrown for 830-yards, four TDs, and just the one interception in his last three games, and the former Patriot’s resurgence, combined with the continued, destructive running of WR Deebo Samuel (115.2 scrimmage YPG this season) has signified an upturn in performances along the bay.

Another win on Sunday will put the 49ers at .500 on the year and, with the likes of division rivals the Rams, and Cardinals now beginning to slip up, the chance is there for Kyle Shanahan’s team to make a late push for playoff qualification.

To squeeze out of a tough NFC West this year, though, the 49ers must begin their late-season charge with a win against Jacksonville on the road this Sunday.

The Jaguars pulled off the shock of the season when they outperformed Josh Allen’s Buffalo Bills en route to a 9-6 win a fortnight ago but Urban Meyer’s team crashed back to earth last Sunday when they lost a close one to the Colts, 23-17.

QB Trevor Lawrence is slowly picking up speed and, generally speaking, his game management is improving. But, after completing fewer than 50% of his passes and losing a late fumble to spoil the Jags’ game-winning drive vs Indianapolis last time out, it’s hard to back the former Clemson man up against Nick Bosa and the 49ers 6th-ranked NFL pass defense (208-yards against per game).

Prediction: 49ers to win and cover

After losing a closely fought, 29-27, battle against the Pittsburgh Steelers last weekend, the Chicago Bears are now in the midst of a four-game losing skid and sit at 3-6 in the NFC North.

Rookie QB Justin Fields is beginning to heat up. In his last two games vs 49ers and Steelers, the former Buckeye has thrown for 466-yards and rushed for 148-yards, which are stats that Ravens 2019 MVP Lamar Jackson would be proud of. However, Fields is still struggling to get it done in the RedZone and emerged from those two games with two TD passes and two interceptions.

Chicago does welcome back full-throttle RB1 David Montgomery to the roster, which will aid Fields a lot at Soldier Field this Sunday. Plus, Baltimore’s 32nd-ranked NFL pass defense that concedes an average of 283.3-yards per game can only give the rookie plenty of confidence…

That said, as poor as the depleted Baltimore secondary has been vs the pass this season, the Bears have similar issues up against a solid ground game and are ranked 23rd in the NFL, conceding 122.8-YPG on average. Up against Baltimore’s No.1 ranked NFL rush offense (154.1 YPG), this is a definite area of concern for Matt Nagy’s team.

The Ravens unexpectedly lost at the hard Rock to Miami on Thursday, but we’re backing Lamar Jackson (2,447-yards passing; 639-yards rushing on the year) and the Ravens imposing ground game to set the record straight at the Bears’ expense.

Prediction: Baltimore gets back to winning ways at Soldier Field

Two of the NFL’s most high-powered pass attacks go head-to-head in America’s Game of the Week as Kansas City Chiefs take on the visiting Dallas Cowboys.

The Cowboys just got through putting the Falcons to the sword on Sunday, in a game that was finished midway through the third quarter with Dallas ahead by 43-3 (which was the final score). Cowboys QB Dak Prescott was in top form, going 24/31 for 296-yards and two TDs before he was rested. RB Ezekiel Elliott continued his 2021 resurgence too by helping himself to two TDs.

It was a similar story in Las Vegas, where the Kansas City Chiefs absolutely battered the Raiders, 43-17. QB Patrick Mahomes probably had his best game of the year to date, going 35/50 for 406-yards and five TD passes. In TE Travis Kelce, WR Tyreek Hill, and RB Darrel Williams, Andy Reed’s team also boasted three separate receivers that tallied +80-yard games – the first time I can remember that happening in a long while.

So, with both offenses on fire based on last week, this game is likely to come down to which team defends the other better. And that is where the Cowboys have the advantage:

Dallas tends to concede about 40-yards less per game than Kansas, and, with Trevon Diggs (8 picks) in the form of his young career, Dallas also has a far superior turnover differential compared to Kansas: Cowboys: +5; Chiefs: -8. Because of this, we’re expecting Dallas to see more of the ball and thus get more opportunity to utilize CeeDee Lamb, Amari Cooper, and the rest of that high-powered offense.

Prediction: Dallas to tough out a big win at Arrowhead

NFL Week-11 Betting Tips: Get a $2,500 Deposit Bonus at BetUS ahead of this Sunday’s games

BetUS is offering a 125% first-time matched deposit bonus that’s worth up to $2,500 to anyone that signs up with the sportsbook before Sunday’s NFL Week-11 fixtures get underway.