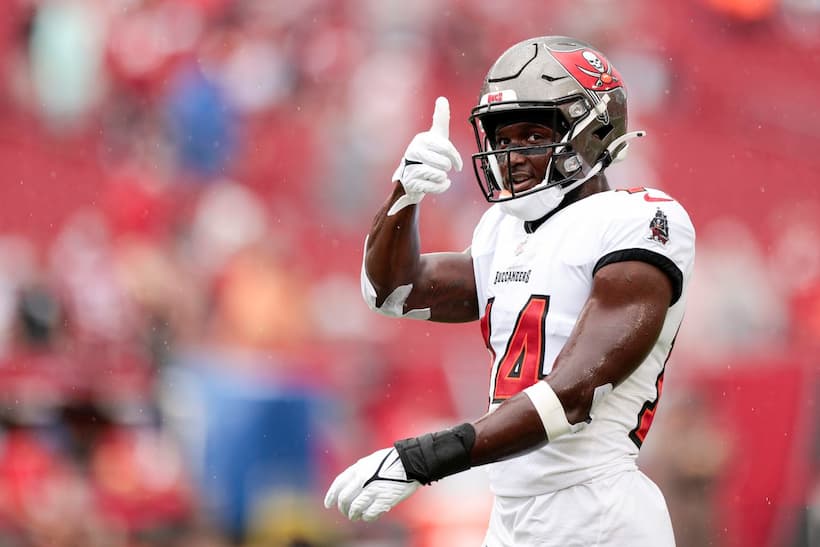 Tonight’s MNF clash sees Bruce Arians defending Super Bowl champions the Tampa Bay Buccaneers (6-3) host Joe Judge’s New York Giants (3-6) in a game that’s likely to have a big impact on the push for playoff places in the NFC.
For a full preview, the latest odds, and free Monday Night Football picks for the game, read on:
Monday Night Football Odds: Buccaneers vs Giants
Below are the latest Buccaneers vs Giants odds as broadcast on BetUS, plus our preferred wager that’s currently featured on the BetUS prop market:

Bet on Buccaneers vs Giants at BetUS

The Tampa Bay Buccaneers haven’t exactly reached the heights that saw them go all the way to a Super Bowl win last season just yet. Bruce Arians’ team somehow came up short against the New Orleans Saints in Week-8, losing 36-27, and then returned from a BYE week only to lose on the road to Washington in Week-10, 29-19.

In these defeats, a couple of things really stood out. Firstly, Tampa Bay is clearly missing wide receiver Antonio Brown and TE Rob Gronkowski. Both of these veterans began the year in superb style before getting injured: Brown had gone for 418-yards receiving and four TDs in five games, and Gronkowski had amassed 181-yards and four TDs from just 21 targets. Today’s press indicates that The Gronk might feature on MNF after recovering fully from his rib injury. But, after faking his COVID-19 vaccination card, when we’ll see Antonio Brown again is anyone’s guess.

Secondly, the injury-ravaged Tampa secondary is still in tatters. Last season’s superb cornerback pairing of Carlton Davis and Sean Murphy-Bunting is unavailable, with both players on IR for the long run. Richard Sherman was brought in to steady the ship during the final week of trades in the NFL. But now the former Seahawk has made his way to IR with a calf injury, leaving the Bucs short in coverage. So short that Washington’s Taylor Heinicke averaged 8.0 yards per attempt up against the Bucs last Sunday.

Make no mistake, led by QB Tom Brady, RB Leonard Fournette, and WRs Mike Evans and Chris Godwin, the Bucs still boast a high-powered offense and are capable of competing with and bettering any team in the NFL on their day (Bucs rank 2nd in NFL for passing yards per game – 406.4-YPG). But, with the secondary ranking 25th in the NFL for passing yards against, any team – including Daniel Jones and the New York Giants – has a chance of causing an upset…

Besides that, the Giants have played better football this season than many credit them for. Joe Judge’s team may be at 3-6 but they only lost to Kansas City Chiefs by three points on MNF a few weeks ago. Plus, they’ve beaten the Saints, Panthers, and Raiders recently – all good football teams, proving that they are more than capable of hanging with the biggest names in the sport, especially when star RB Saquon Bakley features.

Fresh off a BYE and buoyed by the fact that they’ve won two of their last three games; Barkley is back fit, and the fact that they only lost to the Bucs by two points last year, this New York Giants team that ranks in the top-tier of NFL teams for turnover differential (+3) has every chance of causing another upset tonight.

The Tampa Bay offense will again be without WRs Antonio Brown and Scottie Miller. The latter of which is unlikely to return from IR in time for tonight’s game despite nearly featuring vs Washington last week. Better news for the offense in the shape of The Gronk, however. The former Patriot has fully recovered from the broken ribs he suffered in Week-5 and is likely to be involved.

On the Bucs’ defense, CB Richard Sherman remains on IR with a calf injury. And, there are problems too at nose tackle as Vita Vea and Rakeem Nunes-Roches are both doubtful.

As for New York, Saquon Barkley (pictured above) is set to return to action tonight, which is a much-needed boost for Joe Judges’ offense. But, WR Sterling Sheppard is out and RB2 Devontae Booker is questionable to appear – he’s nursing a hip injury.

Over on the defensive side of things, the Giants will be without LBs Lorenzo Carter and Carter Coughlin; starting FS Logan Ryan will miss out, and S Nate Ebner (ankle) is also unlikely to feature.

We’re not willing to go that far. But, we do believe that the Bucs beat-up and porous secondary will allow for Daniel Jones, Saquon Barkley, and co. to at least rack up some yards/points and keep this game competitive.

Hence, the Giants to beat the +11 spread is our NFL betting Pick for the game.

BetUS is offering a 125% first-time matched deposit bonus that’s worth up to $2,500 to anyone that signs up with the sportsbook in time for MNF: Buccaneers vs Giants.

To claim your 125% deposit welcome bonus and get your Buccaneers vs Giants free bets, just follow the instructions below: