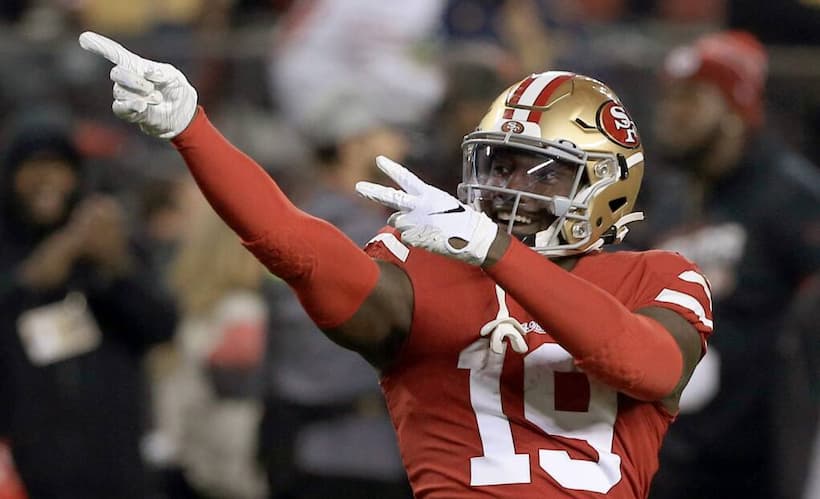 Tonight’s epic MNF encounter sees Kyle Shanahan’s underachieving San Francisco 49ers (3-5) host Sean McVay’s high-flying L.A. Rams (7-2) in a game that, should the 49ers lose, is likely to spell the end of the home team’s push for a playoff birth long before the Christmas presents are even wrapped.
For a full preview, the latest odds, and free Monday Night Football picks for the game, read on:
49ers vs Rams Odds
Below are the latest 49ers vs Rams odds as broadcast on BetUS, plus our preferred wager that’s currently featured on the BetUS prop market:

Bet on 49ers vs Rams at BetUS

Both teams head into this pivotal All-NFC West clash off the back of defeats last time out. The Rams struggled to get going offensively and lost to the Tennessee Titans 28-16, and the 49ers got beat up by James Conner and the Arizona ground game as they lost 31-17 to the Cardinals.

Fortunately for the Rams in particular, the first-placed team in the division, the Arizona Cardinals (now 8-2), were surprisingly beaten by a Cam Newton-inspired Carolina Panthers yesterday, giving Sean McVay’s team (7-2) a chance to gain back ground at the top of the NFC West with a big win tonight.

Kyle Shanahan’s 49ers (3-5), on the other hand, are in danger of falling out of the race for a playoff birth before December and must win at the Levi’s Stadium tonight (something they haven’t done since beating the Rams at Levi’s in 2020) to keep within realistic touching distance of Rams & Cardinals at the top of the division.

Statistically, the Rams boast the NFL’s No.4 ranked offense and the No.3 ranked passing attack. QB Matthew Stafford has already thrown for 2,771-yards, 23 TDs, and just the 6 interceptions. WR Cooper Kupp already has over 1,000-yards receiving and 10 TDs on the year. San Francisco is stingy through the air though, allowing just 206.5-yards per game on average. So, the key part of tonight’s game is likely to be how well the Rams elite pass attack, now featuring Beckham Jr. lines up against the 49ers No.4 NFL ranked pass defense.

If the Rams struggle for success up against 49ers all-action secondary, it could mean a big night on the ground for another Jr., Darrell Henderson Jr., the burly Rams RB who has amassed 562-yards rushing and 5 TDs to date.

San Francisco, on the other hand, will be hoping that Brandon Aiyuk’s recent form continues. The sophomore WR has chalked up 134-yards and a TD in his last two outings on Shanahan’s offense after falling out of favor earlier in the season. With Aiyuk providing a genuine WR2 threat, it gives WR1 Deebo Samuel (882-yards; four TDs) more room to maneuver on the opposite flank, which is likely to prove paramount if QB Jimmy Garoppolo and the 49ers are to pull off an unlikely upset win this evening.

Another statistic that we feel is likely to bear fruit in terms of a correct prediction is the turnover differential. The Rams are up by +5 on the season. But, after turning the ball over three times vs the Cardinals last week, the 49ers are at -9 on the year. Especially if Von Miller suits up in opposition this evening, the San Francisco 49ers need to do a far better job of looking after the football to beat a Rams team that many fancy to make it all the way to the Super Bowl.

Before the ink on Odel Beckham Jr.’s new Rams’ contract had even dried, L.A. lost WR Robert Woods to a season-ending knee injury in practice. Best wishes to Woods on the recovery. But, this does mean that former Cleveland Brown’s star Beckham Jr. is all but guaranteed to feature prominently tonight. Fellow new signing, defensive star Von Miller is still dealing with an ankle injury and will be a game-time decision for Sean McVay’s team.

As for the 49ers, Rookie Jaylon Moore is likely to replace Mike McGlinchey at RT after the 49ers lost the latter to a season-ending torn-quadricep injury last week. WR Mohamed Sanu (knee) and RB JaMycal Hasty (ankle) aren’t expected to feature for the offense. And, CB Dre Kirkpatrick (ankle), and S Tavon Wilson (foot) are likely to miss out for Kyle Shanahan’s team, too.

The 49ers have won five on the bounce against McVay’s Rams. But that was before Matthew Stafford arrived.

This pass-heavy incarnation of the Rams is an entirely different proposition altogether for San Francisco. So, we’re backing Stafford, Kupp, and co. to pile on the misery at Levi’s Stadium by sending the 49ers to another home defeat.

Rams to win and cover the -3.5 spread is our NFL betting Pick for the game.

BetUS is offering a 125% first-time matched deposit bonus that’s worth up to $2,500 to anyone that signs up with the sportsbook in time for MNF: 49ers vs Rams. To claim your 125% deposit welcome bonus and get your 49ers vs Rams free bets, just follow the instructions below: