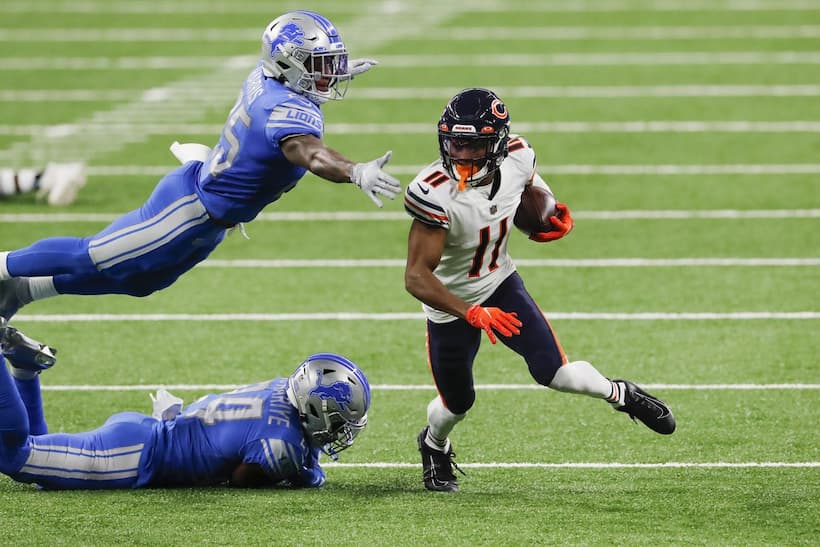 In this special Thanksgiving edition of Thursday Night Football, struggling NFC North sides the Detroit Lions (0-9-1) and the Chicago Bears (3-7) clash in a game that will see Matt Nagy’s Bears slip out of the playoff picture altogether should they lose.
For a full preview, the latest odds, and free Thursday Night Football picks for the game, read on:
Lions vs Bears Odds
Below are the latest Lions vs Bears odds and lines broadcast on BetUS, plus our preferred wager on the BetUS prop market:

Bet on Lions vs Bears at BetUS

Detroit have struggled this season – nobody is going to argue that. The 0-9-1 record speaks volumes. But, it’s not like the Lions have been getting blown out every Sunday – they haven’t.

Last Sunday, Detroit were unlucky to lose 13-10 to Cleveland; they were unlucky not to get more than a tie out of the game with Pittsburgh the week before; they were unlucky not to win vs the Ravens a couple of months ago too when Justin Tucker’s NFL record-breaking field goal was enough to snatch a last-second win for Baltimore… the list goes on. But, in short, Dan Campbell’s team really has been unfortunate at times.

It’s not all about luck in the NFL, however. Detroit’s lack of options and depth at the receiver position was highlighted long before the season got underway and the measly return of 16.0 PPG is only enough to rank the lions 30th in the NFL, and it’s hard to win a game of football when you don’t score very many points.

Another team that’s struggling to put points on the board is Detroit’s Thanksgiving opponent the Chicago Bears.

The Bears average 0.3 points more per game than Detroit and rank 29th in the NFL in the same metric. It’s such a shame because, on the other side of the ball, the Bears boast elite defense; the likes of Khalil Mack (IR) and Roquan Smith have done an excellent job generating pressure up front and the coverage unit is among the best in the NFL:

The Bears secondary has limited opposing teams to just 221-yards of airmail per game – enough to see them rank 11th in the NFL, and that’s despite the fact that Nagy’s offense coughs the ball up easily and the D spends a LOT of time out on the turf.

The Bears’ woes are no better summed up than by the 16-13 defeat to the Ravens last Sunday. As usual, the defense gave the offense the chance to win, and as usual, the offense didn’t take it. That, in a nutshell, is the story of the Bears season to date.

Lions: the big injury concern for the Detroit Lions lays with QB Jared Goff who is recovering from an oblique injury and is questionable to start Thursday’s game. RG Halapoulivaati Vaitai is also doubtful – the big man is still on concussion protocol.

On the defense, the Lions could be without DE Da’Shawn Hand (groin) and LB Trey Flowers. Both players are questionable to suit up but are likely to be game-time decisions for coach Dan Campbell.

Bears: Chicago QB Justin Fields and WRs Allen Robinson II and Darnell Mooney are all listed as questionable (Tuesday) but head coach Matt Nagy is hopeful that his trio of offensive weapons will be fit to feature by the time Thanksgiving rolls around.

On the Bears defense, LB Khalil Mack was placed on IR four days ago – his season is unfortunately over. DE Akiem Hicks and S Eddie Jackson are further concerns. But both players could feature come Thursday, and we will update Chicago’s team news accordingly as news breaks.

It’s hard to get excited about Matt Nagy’s labored Bears offense anymore, and the Lions have to win sometime – Dan Campbell’s team has been so close on several occasions. So, why not on Thanksgiving on their home patch vs a scantly Bears offense that could be without some of their main offensive threats?

Call it a compassionate Thanksgiving feeling, but we think Detroit is owed a win for their recent hard-working performances and certainly possesses enough ability to keep this game close.

Prediction: Detroit Lions to beat the +3.5 spread is our Thursday Night Football Pick for the game.

BetUS is offering a 125% first-time matched deposit bonus that’s worth up to $2,500 to anyone that signs up with the sportsbook in time for TNF: Lions vs Bears.

To get your 125% deposit welcome bonus, just follow the simple steps below:

If you’d like to learn more about the best offshore betting sites available in the USA, click the link.