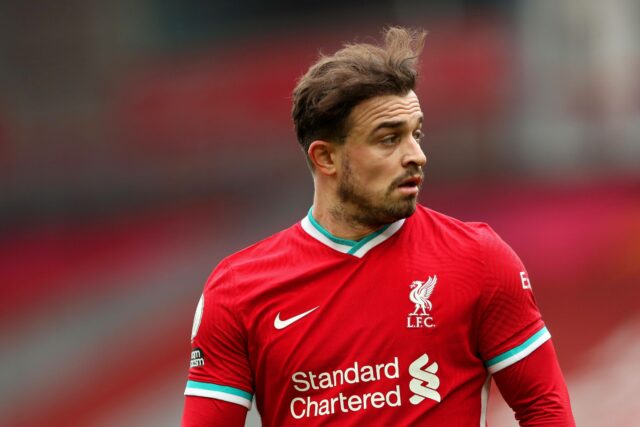 Liverpool attacking midfielder Xherdan Shaqiri has suggested that he is fully fit and looking forward to playing in as many games as possible.

With 10 games remaining in the Premier League, Liverpool need to maintain a string of winning run to boost their hopes of a top-four finish.

The 29-year-old has made 12 Premier League appearances this season and has played in 12 of the Reds’ 16 fixtures since the turn of the year.

He returned to full fitness after an injury-afflicted 2020 and wants to be influential and impactful in the remaining games.

Ahead of the Premier League clash against Wolves, Shaqiri has suggested that he always looks to give his best on the pitch and follow Klopp’s advice.

The Swiss midfielder said to Liverpoolfc.com: “I’m feeling very fit. I’m feeling healthy and fresh – I’m feeling good. I’m always ready if the coach picks me to try to give a good performance to help the team and this club win games.”

Liverpool have lost six games at home in a row, but they have been impressive away from Anfield this season.

The Reds are heading into this match on the back of a 2-0 (4-0 aggregate) win against RB Leipzig in the Champions League. Shaqiri hopes that they can now translate the form in the league and go on a winning run.

He expects a ‘very tight game’ against Wolves, who have a solid group of players.

Shaqiri added: “Yeah, it’s going to be for sure a very tight game and a tough game. Obviously, Wolves have a very good team for many years now – they made a lot of good investment and bought very good players, experienced players and talented players.

“They are in a very good way to be going up and up. It’s going to be a tough game – we need a very good performance on the day to grab some points there.”

Liverpool find themselves eighth in the Premier League, while Wolves are 13th in the table.

In other news, check Liverpool’s predicted starting line-up against Wolves.