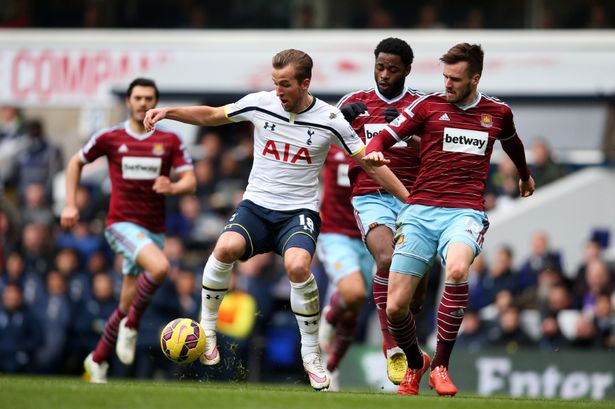 Fresh from the ecstasy of winning one London derby, Premier League title hopefuls Tottenham Hotspur face another capital city rival in the form of West Ham United in a crucial fixture on Friday night.

Current division leaders Chelsea sit four points clear with four games remaining and have a kind final fixture list, but Spurs can pile the pressure on Antonio Conte’s men and reduce the deficit to a single point at the London Stadium.

West Ham meanwhile have only pride left to play for – something that has been in short supply in a campaign that had such expectation around it.

While Arsenal will always be Tottenham’s most hated foe, the Hammers are certainly second in the running and the vitriol the visitors will be subjected to from the home fans will be undoubted.

Spurs will certainly go into the game as favourites.

Nine consecutive Premier League wins means Tottenham are English football’s form team, but the wheels have fallen off against West Ham in the past.

The North London team needed only to match Arsenal’s result in the final day of the 2005-06 season to qualify for the Champions League but lost to the Hammers 2-1 to miss out in agonising circumstances.

West Ham also beat Tottenham in the final months of last season 1-0 at home to dent their opponents title hopes, while a confident 3-0 victory at White Hart Lane back in 2013 was the beginning of the end of Andre Villas-Boas’ tenure at Spurs.

The tactical fluidity of the Lilywhites under Pochettino has been a real standout over the last 18 months, with the side able to play with three in their rearguard or a back four, with Eric Dier the lynchpin between defence and midfield.

Both formations yield a high-octane, expansive brand of football that has led to plenty of excitement and goals for Tottenham this season, with numerous opposition teams unable to live up to the pressure Spurs exact.

While Pochettino is likely to select the majority of the side that beat Arsenal 2-0 on Sunday, one selection decision that will be eagerly anticipated is his choice at right-back.

Kieran Trippier was given the nod to play in the North London derby ahead of usual first-choice Kyle Walker, with conspiracy theories circulating after the game.

While some state that the England international playing 90 minutes in midweek against Crystal Palace may have had some bearing on Pochettino’s decision, the more cynical pundits have speculated that continued transfer speculation linking the defender to Manchester City could have sparked a row between player and manager.

While Trippier is a more-than-capable deputy, losing Walker this summer would be a blow for Tottenham and break up part of this successful group – Pochettino’s team selection on Friday should give an indication into what the future holds for the former Sheffield United man.

Midfield lynchpin Mousa Dembele was only fit enough for the bench against Arsenal but may be reinstated here, while Victor Wanyama put in a mercurial performance against the Gunners.

Tottenham’s attacking quartet of Harry Kane, Christian Eriksen, Son Heung-min and Dele Alli have netted a whopping 58 Premier League goals between them this season and West Ham will have their work cut out to blunt an offensive unit on form.

At the other end of the pitch, Spurs boast the English top flight’s most-miserly defence, which has only conceded 22 times this season.

Chelsea’s win over Everton at the weekend has many claiming that the Blues cannot be caught but a win for Tottenham at West Ham would reduce the deficit at the top to one point.

The Stamford Bridge side do not play until Monday night, where they host Middlesbrough, with a couple of days to ponder their fate should Spurs defeat the Hammers.

Last season Tottenham’s form at the end of the campaign was awful, which allowed eventual champions Leicester City an easy and stress-free run-in under little pressure.

Pochettino will be motivated to avoid affording the same luxury to Chelsea, with Tottenham hoping to keep the Blues accountable and make them fight in their remaining fixtures if they are to win the league.

Importantly, victory for Spurs at the London Stadium would confirm that the White Hart Lane side will finish at least second and put an insurmountable points tally between Tottenham and the chasing pack.

Talk of top-four finishes and challenging for silverware was on the lips of the more-optimistic West Ham fans ahead of this season but 2016-17 has largely been one to forget for Slaven Bilic’s men.

Elimination from the Europa League in the qualifying stages was compounded by a poor start to the domestic campaign, especially at their new stadium.

January brought with it the shock of Dimitri Payet’s forced exit from the club and up until recently it is fair to say that the Irons were embroiled in a fight to avoid being relegated.

Most of the West Ham fans will already have one eye on next season after a campaign to forget, but a win over Spurs would be a welcome bright moment in another-wise dark last nine months.

To record victory would be one thing, but also to end Tottenham’s lingering title hopes would be a source of delight for the Hammers faithful.

Bilic will be thinking about the summer transfer market and the Croatian coach has a number of major issues to remedy if West Ham are to improve their fortunes next season.

In the shorter-term, the Irons rearguard will have to man up against an intimidating Spurs attack and continue a recent run of new-found steadfastness.

West Ham have conceded 59 goals this season – the fourth-worst in the Premier League and only one less than basement dwellers Sunderland.

However, back-to-back 0-0 draws against Everton and Stoke City have suggested that Bilic has found a working system to stop the rot and make the Hammers a more combative unit.

The Irons boss has fielded three at the back in both of those games, with January recruit Jose Fonte, Winston Reid and most impressively James Collins standing up and being counted.

Left wing-back Arthur Masuaku has been in excellent form of late, relegating Aaron Cresswell to the bench, but the French wideman picked up an injury against Stoke and as such is a doubt for the Tottenham clash.

In the final third, both Andy Carroll and Diafra Sakho continue to struggle with injury problems, with the duo only making 22 Premier League appearances between them this term.

The England international targetman has a chance of making a return to the team against Spurs and West Ham are a different proposition with him in their XI.

Carroll would not take a backward step in going toe-to-toe with Tottenham enforcers Toby Alderweireld and Jan Vertonghen but should he not be fit it is expected that Jonathan Calleri will continue as the furthest man forward.

The Argentine’s loan acquisition was initially seen as something of a coup for West Ham, but the South American has struggled to make an impression in a Hammers side lacking firepower.

The possible final straw for Calleri in an Irons shirt came against Stoke, when he tried to score with a rabona, and missed, with the Potters goal gaping.

As with most games, control of the midfield will play a critical role in dictating the outcome, with Tottenham’s options in the heart of their team much-superior to that of West Ham.

Wanyama and Dembele are the first-choice pairing for Pochettino and most likely to play, but Dier can also do a solid job in the boiler room and Moussa Sissoko is ready to feature if called from the bench.

West Ham are missing Pedro Obiang through injury, which is a shame as the Spaniard was coming into good form before getting hurt.

As such, the responsibility of matching Wanyama’s physicality and stifling Dembele’s creativity will fall on Mark Noble and Cheikhou Kouyate, while Havard Nordtveit could also feature in the heart of Bilic’s team.

Of the last 15 meetings between these London rivals in all competitions, Tottenham have recorded eight victories, West Ham have prevailed five times and there have been two draws.

There is little love lost between the supporters and local bragging rights will be the immediate priority for both sets of fans.

However, the game could also have a telling impact on the title race, while victory for West Ham may be the catalyst to see the Hammers springboard towards a possible top-half finish.