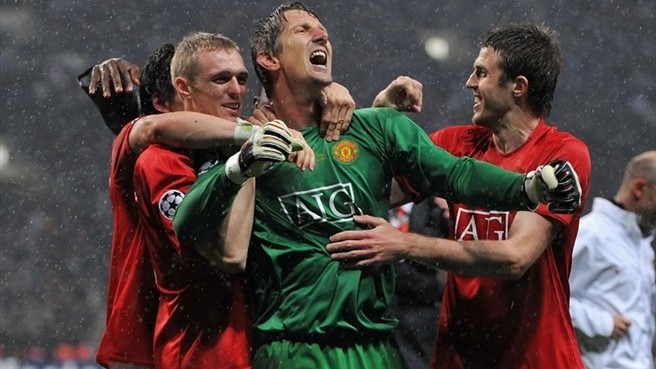 Former Manchester United goalkeeper Edwin van der Sar has revealed all the preparation that went into his European Cup winning penalty save in Moscow back in 2008.

Signed from Fulham in 2005, the Dutchman was a a pivotal part of the globe conquering United side of the late 2000s. The former Ajax man arguably gave his best performance for United in the 2008 Champions League final where his heroics between the sticks helped Sir Alex Ferguson’s side triumph over Chelsea and win their third European Cup.

Van der Sar was awarded the man of the match award at the end of the game after saving Nicolas Anelka’s crucial spot kick. Speaking to FourFourTwo magazine, the now 46-year-old has exclusively revealed how he prepared for the famous night in the Russian capital.

“I remember studying a lot of Chelsea’s penalties on DVD before the match,” he said.

“So, for example, I think I probably analysed about 40 that Frank Lampard had taken in the past.

“I had made plenty of notes and noticed that Nicolas Anelka would almost always take his penalties to the goalkeeper’s right. Later on, I heard that Chelsea had also done their homework on me and learned that I usually dived to my right. So I think their players were told to shoot to my left, which most of them did. I’d anticipated Anelka would choose to shoot the other side, though, and thankfully that is what happened.”

The former Netherlands international has won some of the biggest trophies the sport has to offer, but pinpointed that Champions League win over Chelsea as the highlight of his career.

“After I had pushed away his penalty, I felt like I was separated from the world for a couple of seconds. I don’t think I’ll ever experience a more ecstatic moment than when I realised we’d just won the Champions League final and noticed all of my team-mates running towards me.

“It was the highlight of my whole career.”