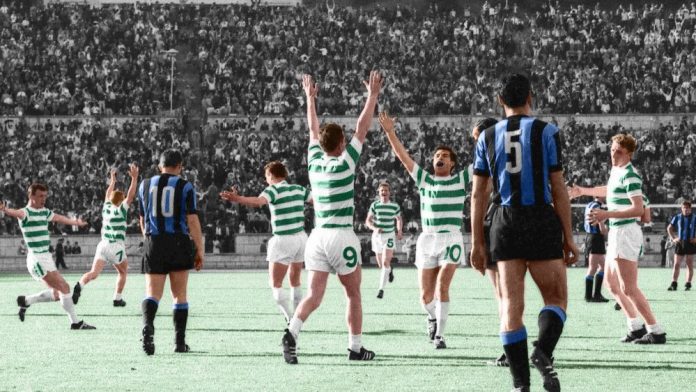 On this day in 1967, Celtic beat Inter Milan in Lisbon to become the first British team to win the European Cup.

Played in front of 45,000 fans at the Estadio Nacional, this was Inter’s third European Cup final since their back to back Cup wins in 1964 and 1965. Meanwhile Celtic had made their debut in the tournament that season and were in the final for the first time.

The Italians took the lead in through a Sandro Mazzola penalty in the 7th minute. Celtic full-back Jim Craig brought Renato Cappellini inside the box forcing the referee to point to the spot.

The two teams went into the half time interval with Celtic trailing by a goal.

The Scotsmen equalised in the 63rd minute after Tommy Gemmell put the ball in the back of the net. The winner was scored by Stevie Chalmers in the 84th minute making Celtic the champions of Europe.

On this day in 2005, Liverpool came from 3-0 down to beat AC Milan on penalties and win their fifth European Cup.

Played at the Ataturk Stadium in Istanbul, Milan took the lead in the first minute of the game through a Paolo Maldini strike. A brace from Hernan Crespo made it 3-0 at the end of the first half.

Helpless in the first half, Liverpool were a completely different team after the interval. Goals from Steven Gerrard, Vladimir Smicer and Xabi Alonso in the space of six minutes brought the scores level.

With the scores still level at the end of extra time, the referee signalled for penalties. Serginho, Andrea Pirlo and Andriy Shevchenko missed for Milan to hand Liverpool their fifth European Cup.