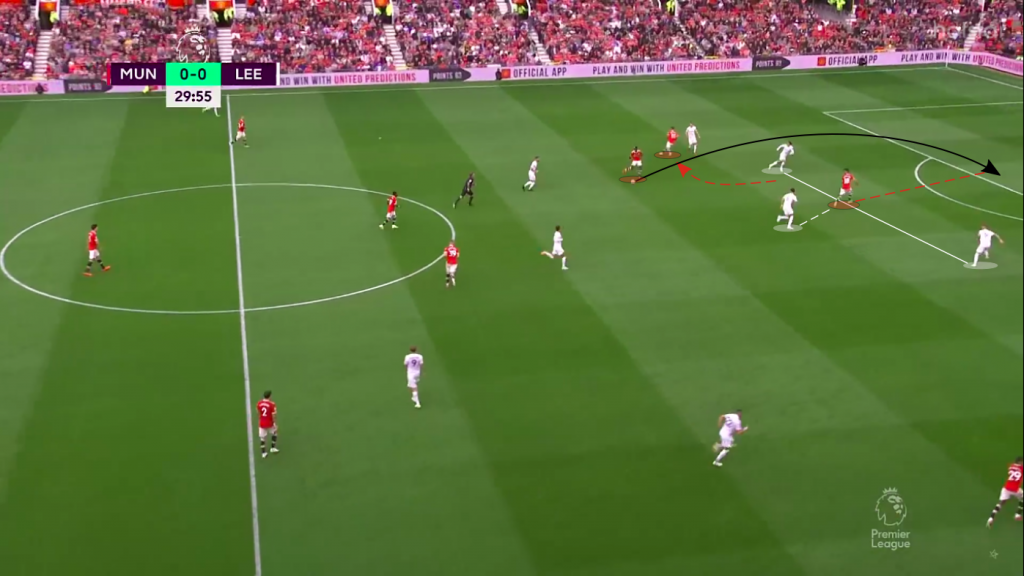 It’s back, and it’s back with an absolute bang.

Matchday 1 of the 2021/22 English Premier League has already delivered some absolute thrillers, including Brentford’s opening-day win over Arsenal and Manchester United’s thrashing of Leeds United. We will, of course, be focusing on the latter here.

There was a fair bit of pre-match disgruntlement among United fans, as they did not seem too happy with the line-up.

In all fairness, Ole Gunnar Solskjær’s hand was rather forced because there were no alternatives in most positions (bar Jadon Sancho, who had to settle for a spot on the bench presumably because he still needs time to get fully up to speed).

Tactically, though, the Norwegian manager certainly had options and he delivered in style. 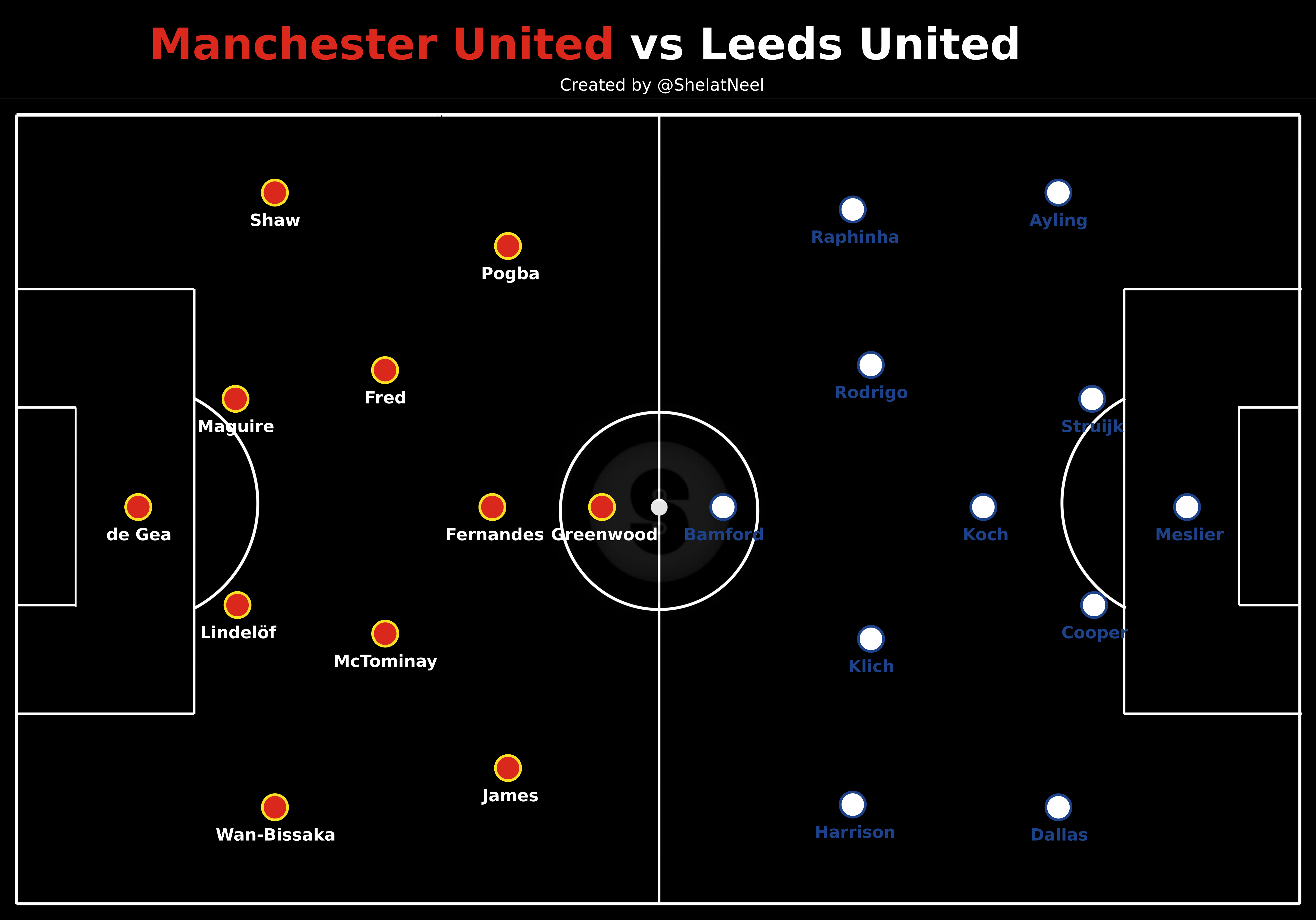 Man United lined up in a 4-2-3-1, while Leeds deployed their familiar 4-1-4-1 with Robin Koch (who mostly plays as a centre-back) in defensive midfield.

The visitors used their familiar man-marking system where each player latches onto an individual opponent in defence except a striker and two centre-backs. 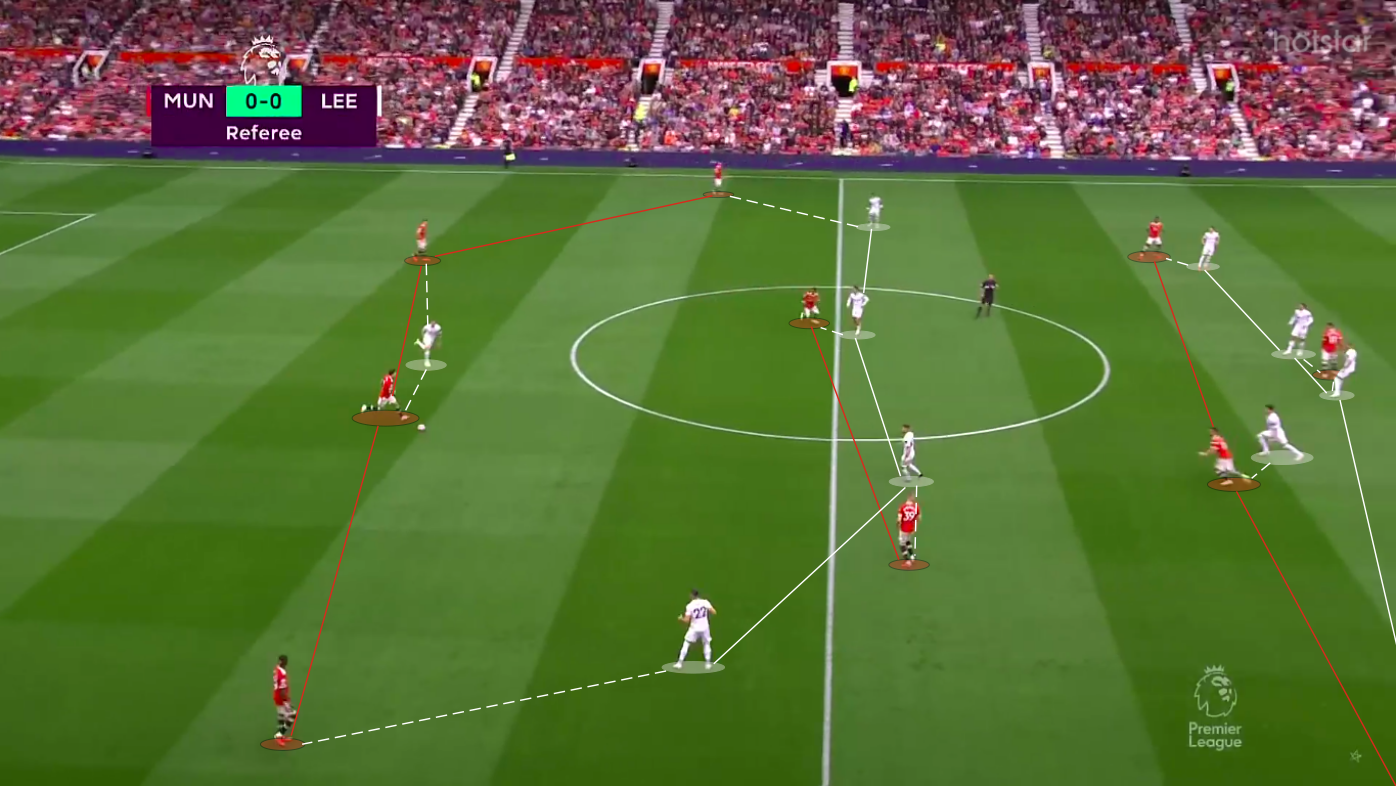 The main issue, though, was that Marcelo Bielsa’s side’s press was not quite on point. They lacked the intensity that we have become accustomed to seeing, which is why they only managed two high turnovers and allowed Man United to have easy possession in the build-up phase.

This, in turn, allowed their attackers to make lots of off-ball movements while the centre-backs or midfielders had possession, wreaking havoc against Leeds’ man-marking system.

Therefore, something as simple as Bruno Fernandes dropping deep and flicking a pass on to Scott McTominay could easily bypass Leeds’s midfield: 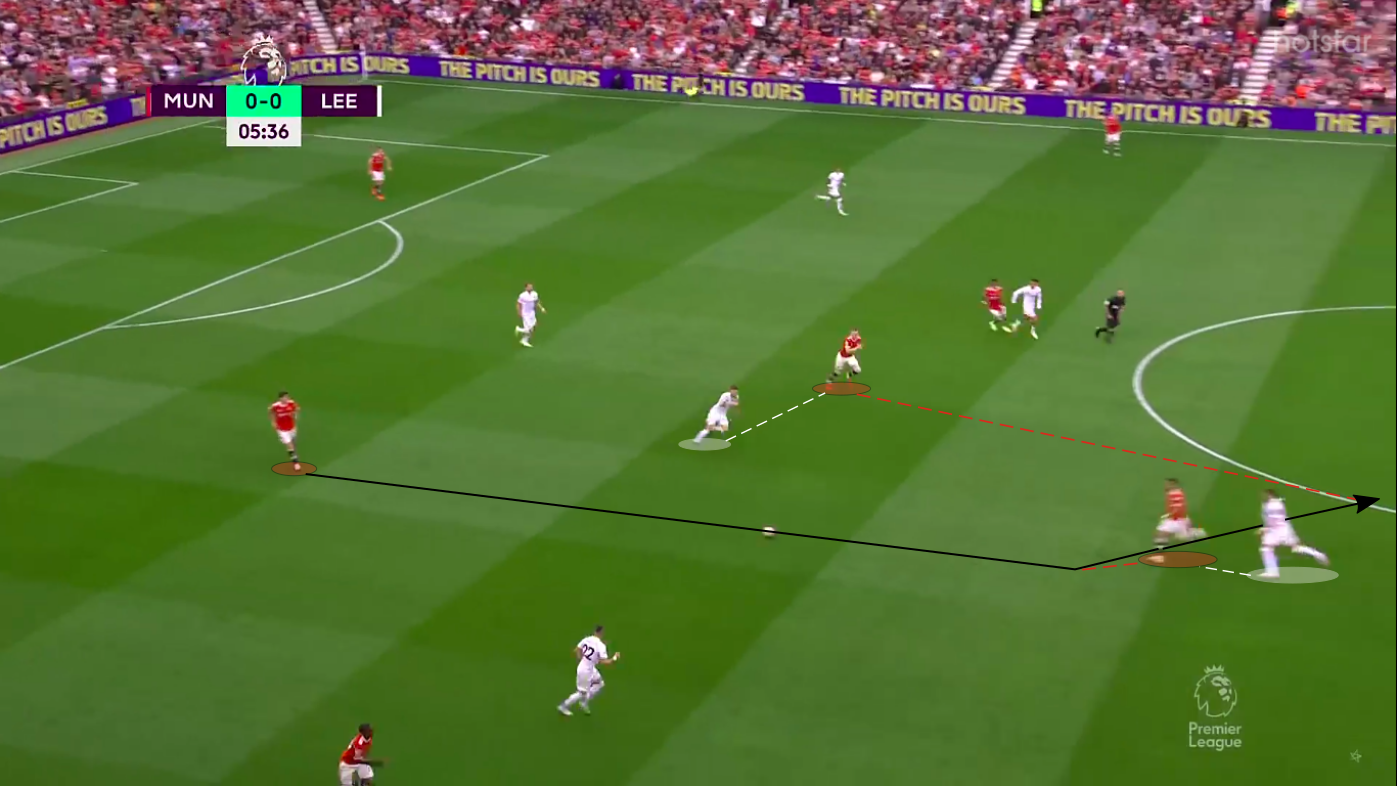 Alternatively, simple positional rotations could pose problems. Here, for example, Fernandes has moved to the left wing while Paul Pogba is in the more central attacking midfield position and Daniel James is in a striker’s area, while Mason Greenwood is on the right. 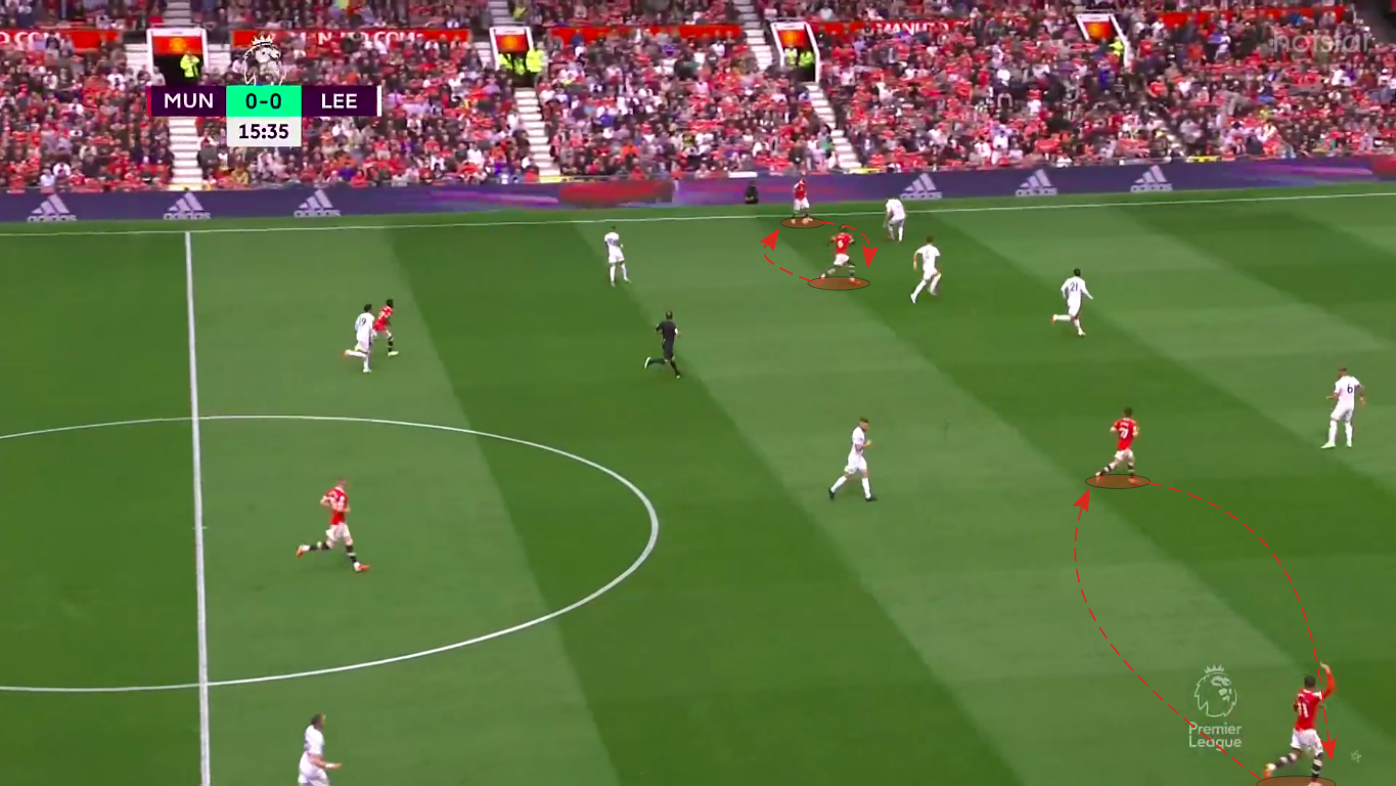 In other cases, there was a complete change in formation as the home side transitioned into a 4-3-3 of sorts, with Pogba moving central and deep and McTominay pushing forward in a box-to-box role. 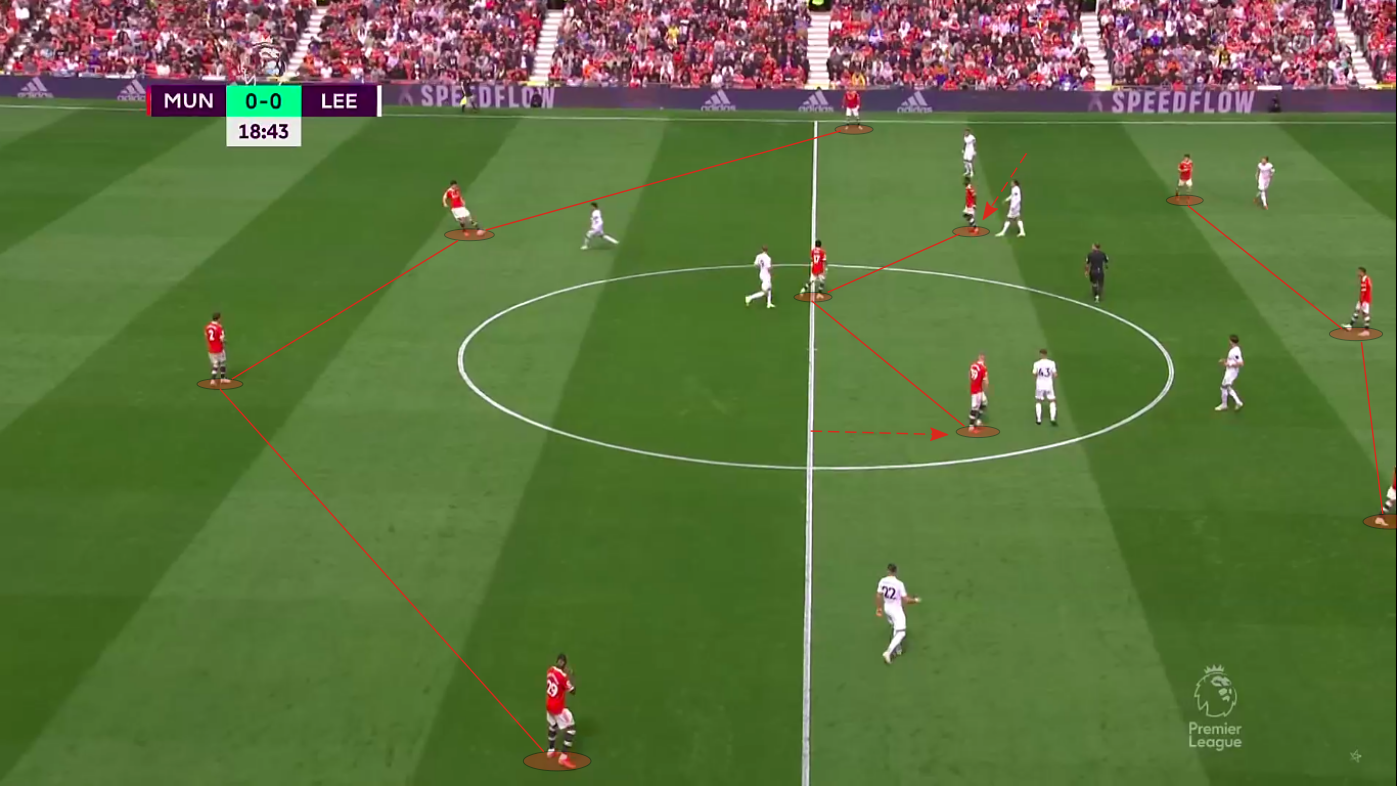 A combination of these elements led to the opening goal.

A poor ball out from the back allowed Man United to regain possession near the halfway line through Victor Lindelöf, who found McTominay free of any pressure.

As soon as he received the ball, the attackers’ off-ball movements began as Greenwood peeled off to the left to drag a centre-back away and create space in the middle for Fernandes to run into, while Pogba drifted into the central pocket. 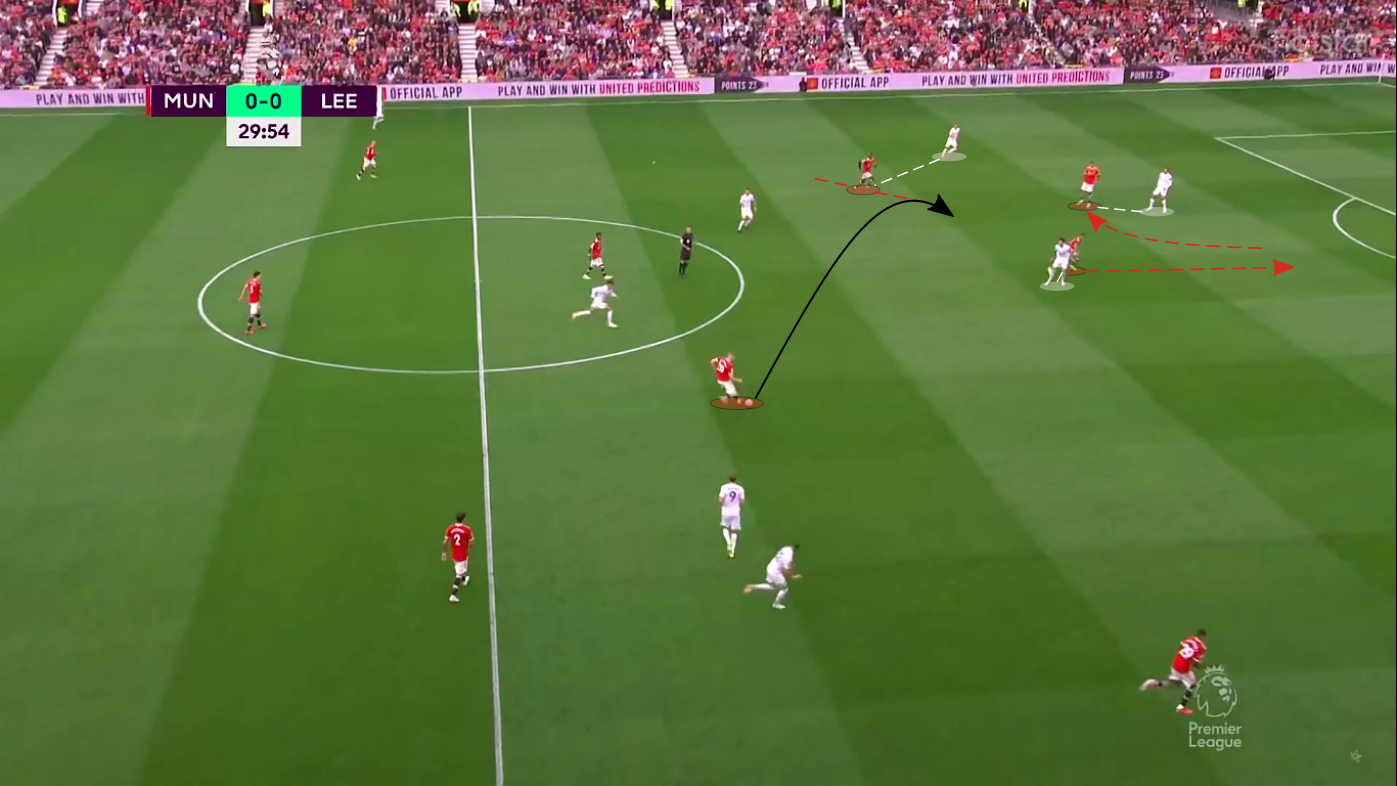 The Frenchman then received the ball, turning it forward first-time for Fernandes, whose third-man run coupled with Greenwood’s decoy left him one-on-one with the keeper. A smart finish and it was 1-0. 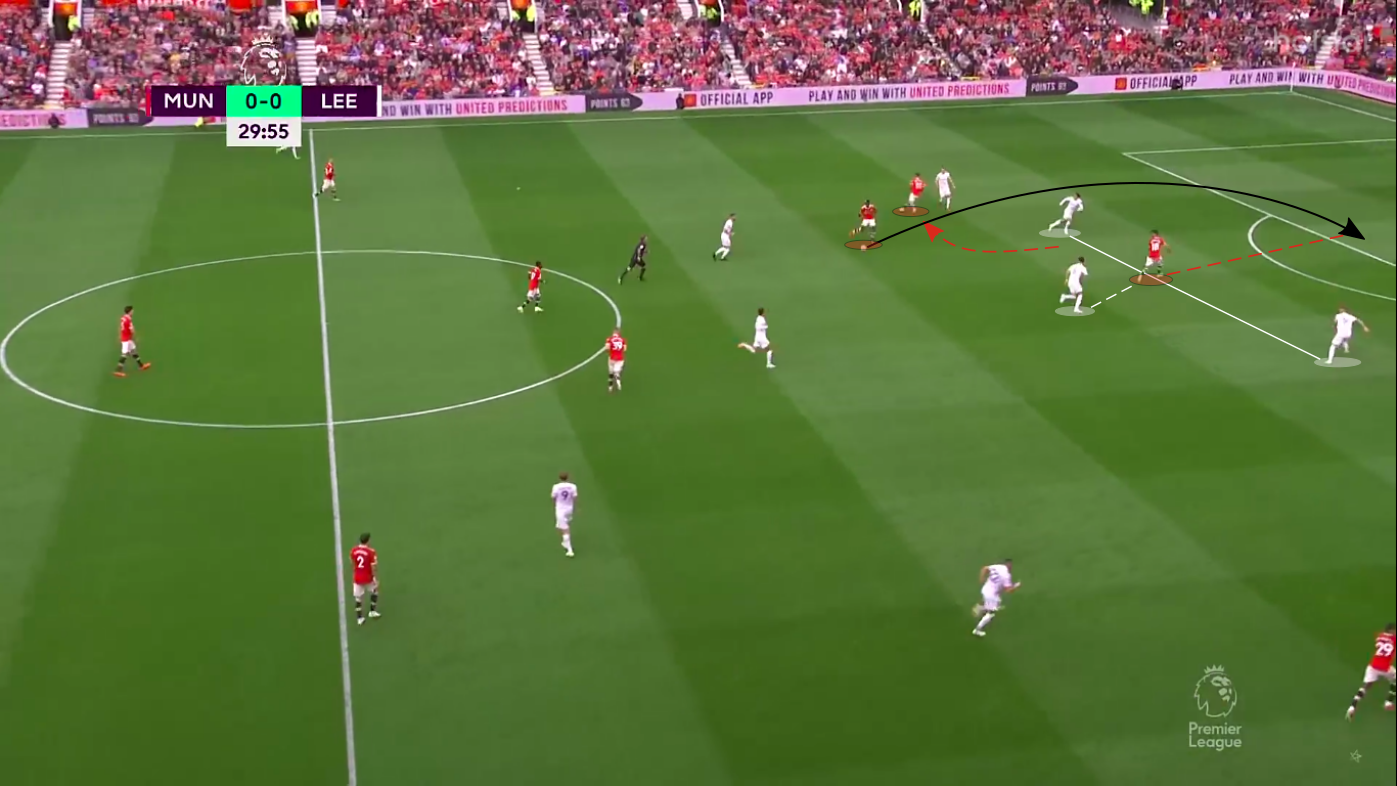 Greenwood peeling off to the left and creating space for Fernandes to make a central run was a repetitive theme – it was also visible just before the score became 3-1. 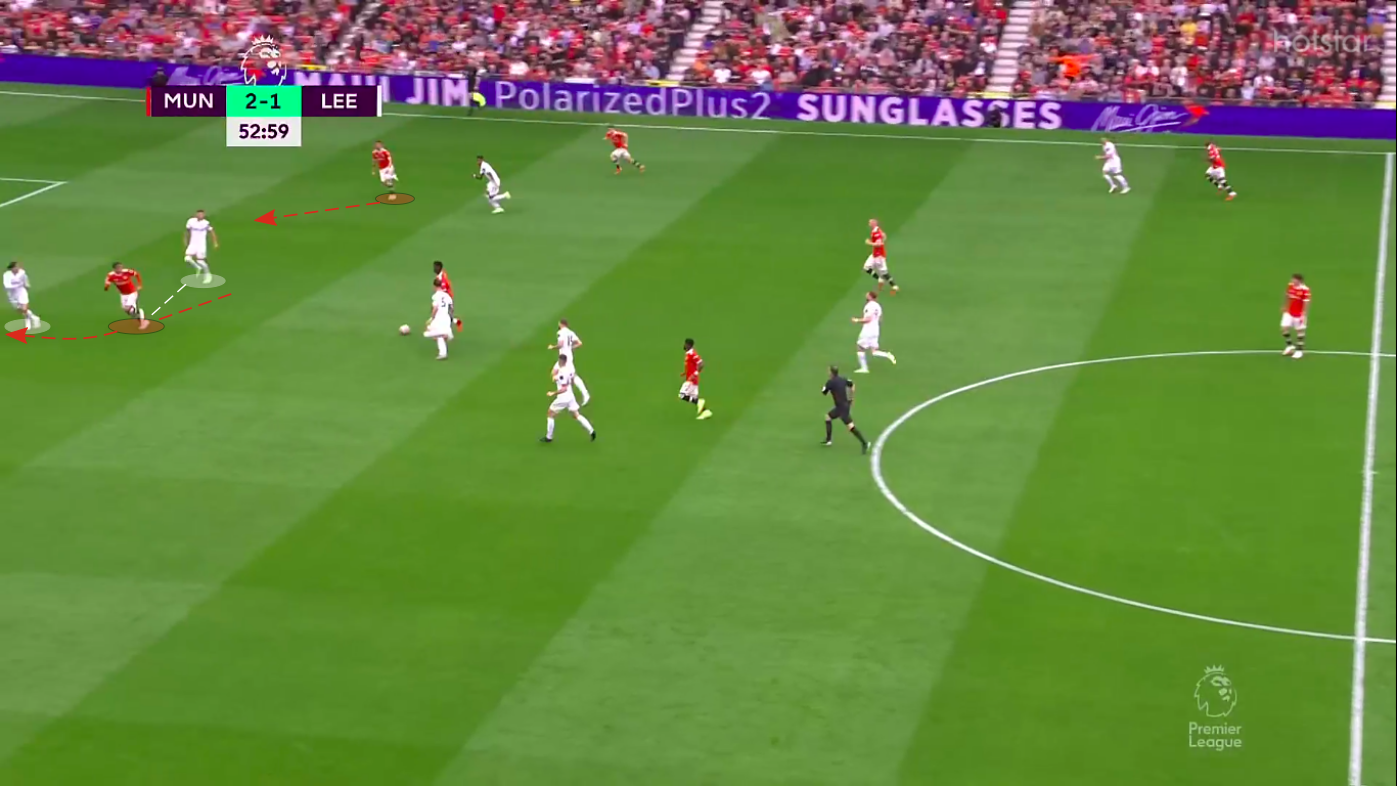 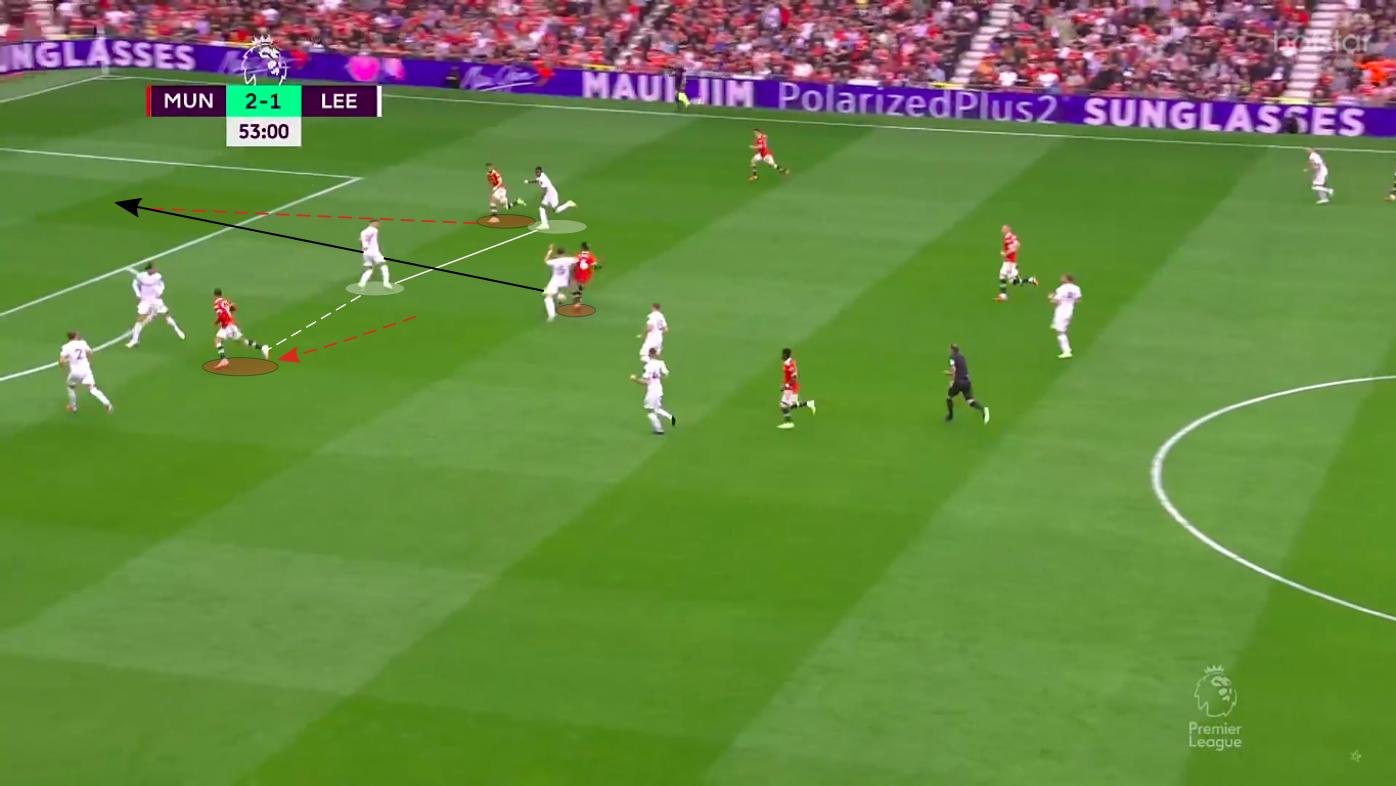 The fourth goal was a simpler version of this pattern, as Fernandes made the run in behind while Greenwood literally just stood still, but Leeds United’s defence could not cope even then. 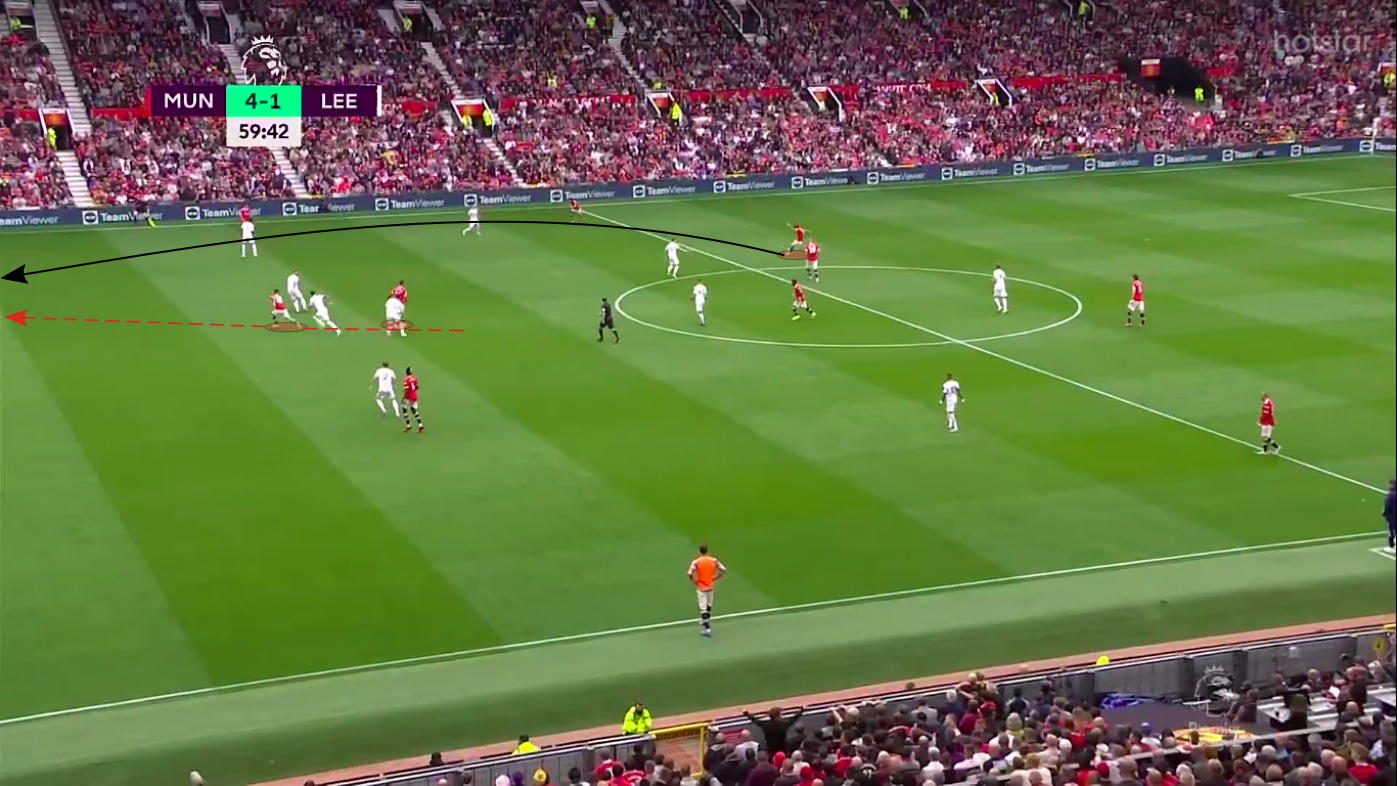 The other advantage of Greenwood drifting into the left channel was that he often attracted the attention of Leeds right-back Luke Ayling, creating the scope of an overlapping run. 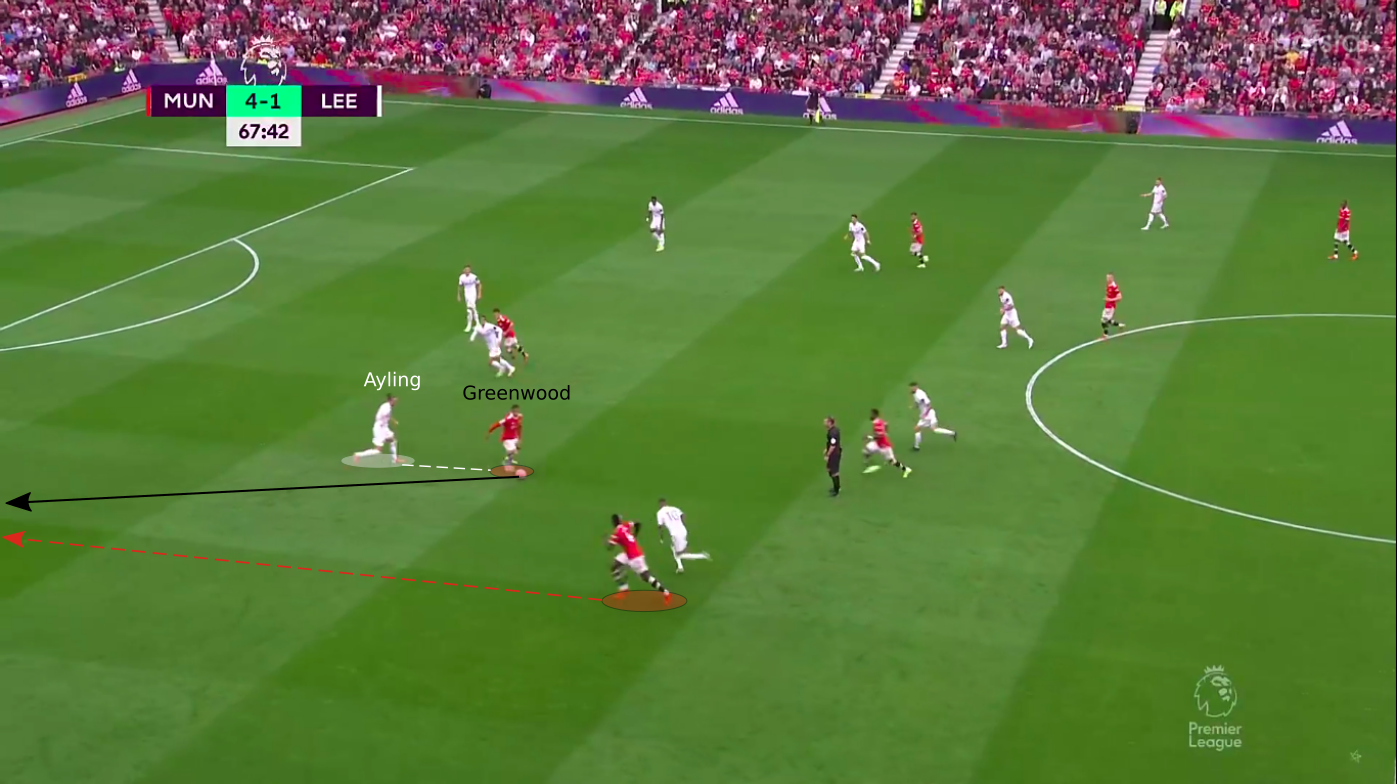 That is how the final goal came about, with a rare foray forward from Fred instead of McTominay seeing the Brazilian get on the scoresheet. 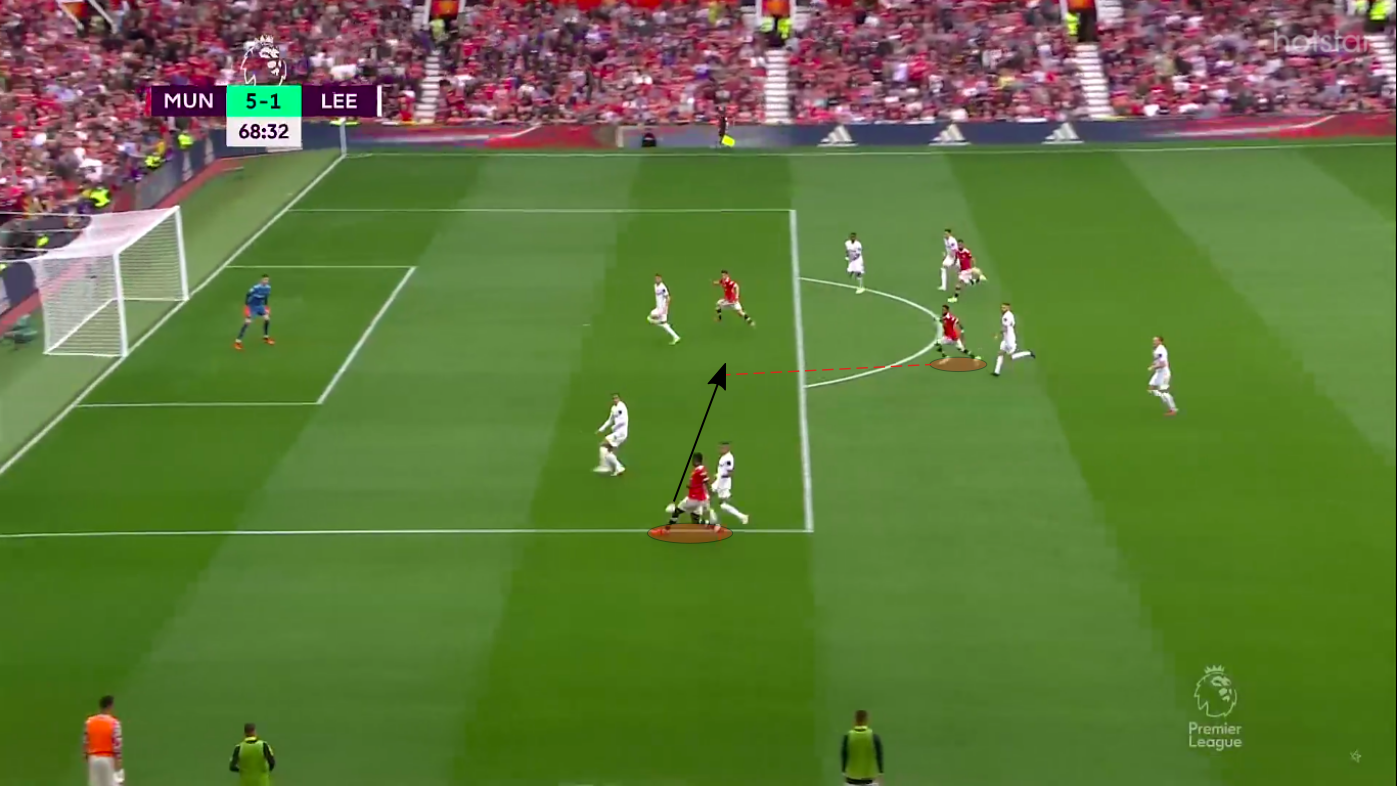 Pogba’s playmaking abilities were also put to use in transition. In their own half, Man United defended in a 4-4-2 with the two wide attackers from the 4-2-3-1 dropping back.

On the left, this was the Frenchman, who could thread passes forward from deep positions in the event of a turnover.

That is precisely what led to their second goal, though Greenwood’s run and clinical finish deserve a lot of credit too. 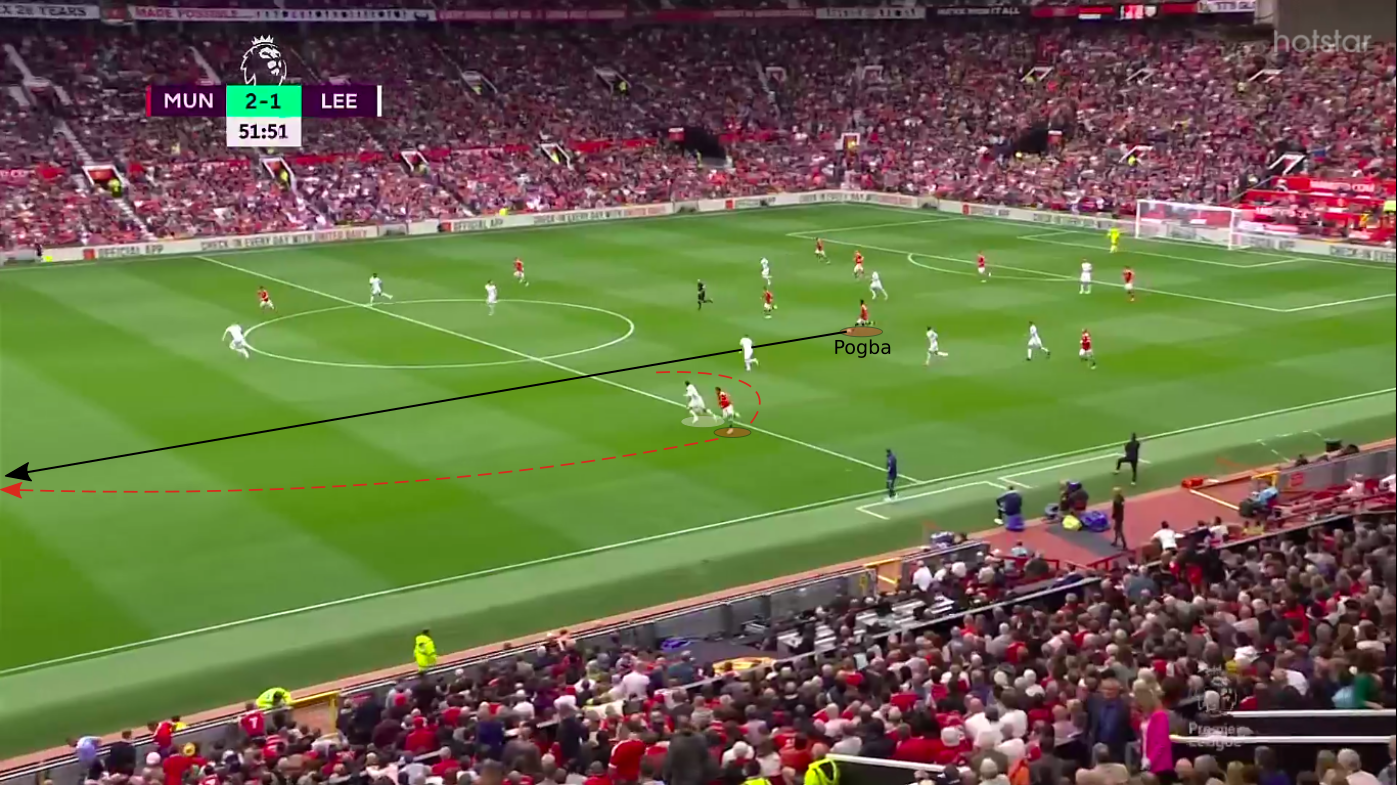 Overall, this was, obviously, a near-perfect victory for Man United. Yes, there were a couple of defensive lapses and the scoreline might be slightly flattering largely thanks to some unsustainably good finishing, but the way the whole team (and especially the attackers) worked in the 4-2-3-1/4-3-3 hybrid has to be considered incredibly encouraging.

With that being said, Leeds are probably the last side you want to watch a team play against before deciding how their season will go because Bielsa’s adamance to go man-for-man till death coupled with a poor press on this occasion is something you won’t see anywhere else in the Premier League.

The Red Devils have the exact profile of attackers to destroy a man-for-man defence, as was evident last season in their 6-2 victory.

So, although Man United might not blow every opponent away with a 5-1 win, their fans can certainly afford to get a little more excited for the upcoming season on the back of this performance (and Raphaël Varane‘s pre-match unveiling at Old Trafford).