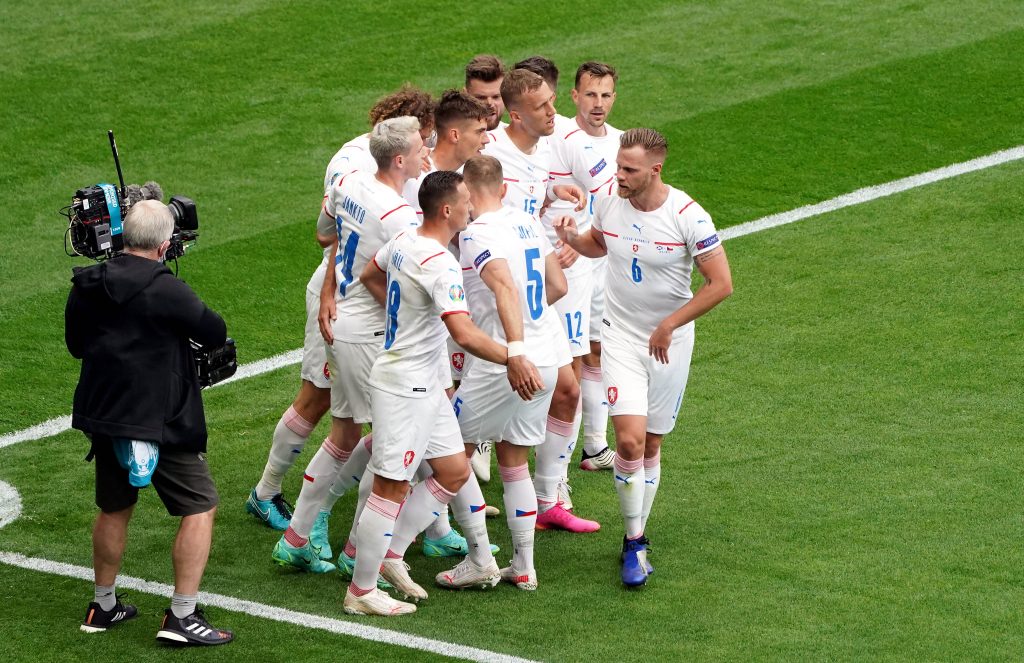 Czech Republic got off to a flying start at Euro 2020 on Monday, defeating Scotland 2-0 at Hampden Park.

It was an open start to the game, with both sides having early chances. Patrik Schick was the first to come close, seeing a goalbound strike well saved by goalkeeper David Marshall.

Down the other end, Andy Robertson was looking dangerous down the left for Scotland. He combined well with Stuart Armstrong and crossed for Lyndon Dykes, who fired wide at the near post.

Then Robertson had a chance of his own after being teed up by Ryan Christie. However, the Liverpool man’s strike was turned over the crossbar by Tomas Vaclik.

With half time approaching the deadlock was broken, and it was the visitors who got it.

West Ham United full-back Vladimir Coufal crossed for Schick, who diverted his header into the far corner to give his side the lead going into the break.

The second half started in end-to-end fashion. Marshall was forced into two early saves, denying Schick a second, as well as Vladimir Darida.

Vaclik was also forced into action, sparing Tomas Kalas’ blushes after the former Chelsea man looped a clearance towards his own goal.

Jack Hendry also came close to an equaliser, seeing his effort from the edge of the box clip the crossbar.

Not long afterwards, Czech Republic doubled their lead with a moment of pure quality.

Goalscorer Schick picked up the ball just inside the opposition half and hit a first-time strike over the head of Marshall and into the back of the net. His effort has already been touted as the goal of the tournament.

Steve Clarke’s men continued to press for a goal and came desperately close when Stuart Armstrong’s shot deflected onto the top of the net. Many spectators initially thought it had found its way in.

Dykes had another couple of opportunities to halve the deficit, first having a close-range effort saved, and again being denied by the right boot of Vaclik when he maybe ought to have scored.

The final 15 minutes were fairly comfortable for Czech Republic, who twice could have made it three.

Schick had a chance for his hat-trick but shot straight at Marshall, while substitute Michael Krmencik also had a good chance saved.

As for the home side, Scott McTominay volleyed over from a set-piece, and winger James Forrest saw his effort blocked after a fine solo run.

The defeat leaves Scotland in some trouble going into their final two games. They will likely have to win at least one of their upcoming fixtures against England and Croatia to stand a chance of progressing.

David Marshall (6/10) – Made several good saves but got caught out for Schick’s second.

Stephen O’Donnell (5/10) – Didn’t close Coufal down quick enough for the goal and did little going forward.

Grant Hanley (5/10) – Beaten in the air by Schick for the opening goal. Had a tough afternoon.

Jack Hendry (6/10) – Rarely beaten and could do little about the goals. Unlucky with a shot that hit the bar.

Andy Robertson (7/10) – The best player on the pitch in the first half. Always energetic and put in some good crosses.

Stuart Armstrong (6/10) – Linked up well with Robertson down the left but wasn’t decisive enough.

John McGinn (6/10) – Some good play in the middle of the park. Lost the ball a couple of times.

Scott McTominay (5/10) – Far more will have been expected from the Manchester United man. Not involved enough.

Ryan Christie (6/10) – Some nice footwork and created a chance for Robertson. Substituted at half time.

Lyndon Dykes (5/10) – Battled up front and held the ball up well but wasted a couple of chances.

Vladimir Coufal (7/10) – Showed a glimpse of why West Ham fans have taken to him so well with a wonderful cross for the opener. Most of Scotland’s threat came down his side, however.

Ondrej Celustka (7/10) – Got himself in the way of everything, including one crucial block to maintain their clean sheet late on.

Tomas Kalas (7/10) – Made several tackles and clearances. Lucky not to score a freak own goal.

Jan Boril (6/10) – Defended alright. Didn’t offer much down the other end.

Tomas Soucek (7/10) – Won the battle against McGinn. Secured himself a rather fortunate assist for Schick’s second.

Alex Kral (6/10) – Had a reasonably solid game at the base of midfield but occasionally struggled to take control.

Lukas Masopust (6/10) – Sometimes had space down the right as Robertson went forward but didn’t do enough with it.

Patrik Schick (9/10) *MOTM* – First goal was a terrific header. Second goal was a piece of magic that the very best would’ve been proud of. Best player on the pitch by a mile.