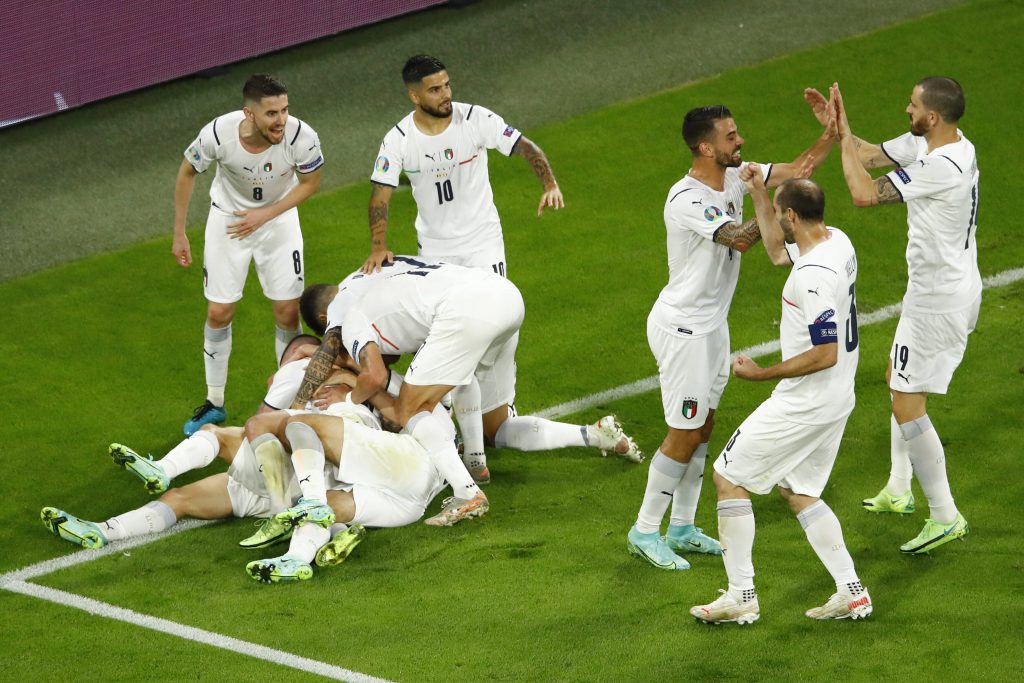 Belgium have been knocked out of the European Championships after losing 2-1 to Italy on Friday.

Italy thought they had taken an early lead when Leonardo Bonucci bundled home at the back post from a free-kick.

However, replays showed that he was marginally offside, and VAR intervened to overturn the decision.

Belgium responded with a couple of chances of their own. Gianluigi Donnarumma twice had to be at his best, denying Kevin De Bruyne and Romelu Lukaku.

And moments later, Italy got themselves in front. Jan Vertonghen made a mess of a clearance, and it fell to Nicolo Barella in the box.

The Inter Milan midfielder wriggled away from Thomas Vermaelen and Thorgan Hazard and slammed into the far corner.

They continued to push for a second, and they were rewarded with a fantastic goal just before half time.

Lorenzo Insigne skipped past Youri Tielemans and bent a curling effort into the top corner to double his side’s lead.

However, the two-goal deficit lasted just a minute as Belgium instantly hit back. Jeremy Doku produced a great burst of pace to beat Giovanni Di Lorenzo, who brought the teenager down. Lukaku stepped up to the spot to pull one back just before half time.

The former Manchester United striker had a wonderful chance to get his second of the game and his fifth of the tournament after the break.

De Bruyne’s low cross found him at the back post, and he turned it towards goal, but Leonardo Spinazzola was on hand to make a crucial block.

And Spinazzola almost added a third down the other end. Insigne found the left-back with a cross, but he volleyed wide at the near post.

Belgium were working their hardest to draw themselves level and came close in the 70th minute.

Substitute Nacer Chadli saw his shot deflect towards the back post to Thorgan Hazard, but it was just behind the Borussia Dortmund man, and he was unable to turn it into the back of the net.

Into the closing stages, and the Red Devils were still pushing but unable to find a way through.

Doku, who had been bright all evening, went on a mazy run and fired just over from the edge of the box.

That was it for Roberto Martinez’s side, ensuring their elimination. As for Italy, they travel to Wembley for a semi-final clash with Spain.

Thibaut Courtois (7/10) – Couldn’t do much about either goal. Made a couple of good saves.

Toby Alderweireld (6/10) – Coped reasonably well with Immobile. Perhaps could have closed Insigne down quicker for his goal.

Thomas Vermaelen (5/10) – Shouldn’t have let Barella get the shot away for the opening goal. Did okay otherwise.

Jan Vertonghen (4/10) – A poor afternoon. Lost the ball for the opener and could have shut down Insigne for the second.

Youri Tielemans (5/10) – Failed to control the game as he would have liked and was beaten too easily by Insigne for the second goal.

Thorgan Hazard (5/10) – Didn’t contribute much in attack. Should have done more to stop Barella for his goal.

Kevin De Bruyne (6/10) – Had a few bright moments and had one shot well saved but was not at his best.

Romelu Lukaku (6/10) – Fairly well dealt with by Chiellini and Bonucci. Got his goal from the penalty spot.

Gianluigi Donnarumma (7/10) – Made a couple of good saves. Confident in his handling and distribution.

Giovanni Di Lorenzo (5/10) – Found it very difficult up against Doku. Conceded a penalty just before half time.

Leonardo Bonucci (8/10) – Managed to keep Lukaku quiet and had an early goal ruled out for a marginal offside.

Giorgio Chiellini (8/10) – Much like his centre-back partner, marshalled Lukaku very well with a strong performance.

Leonardo Spinazzola (7/10) – A constant threat down the left, getting into many good positions. Went off towards the end with an injury.

Jorginho (7/10) – A very tidy in the middle of the park. Composed and good on the ball.

Nicolo Barella (8/10) *MOTM* – His best game at the tournament so far. Scored a fantastic goal and also managed to get an assist.

Marco Verratti (7/10) – Good on the ball and energetic. Managed to win a few fouls and got himself an assist.

Federico Chiesa (6/10) – Got in some good areas. Sometimes let himself down with his decision making.

Ciro Immobile (5/10) – Worked hard but squandered a lot of attacks.

Lorenzo Insigne (8/10) – Always looked lively and lit up the game with an absolute beauty.