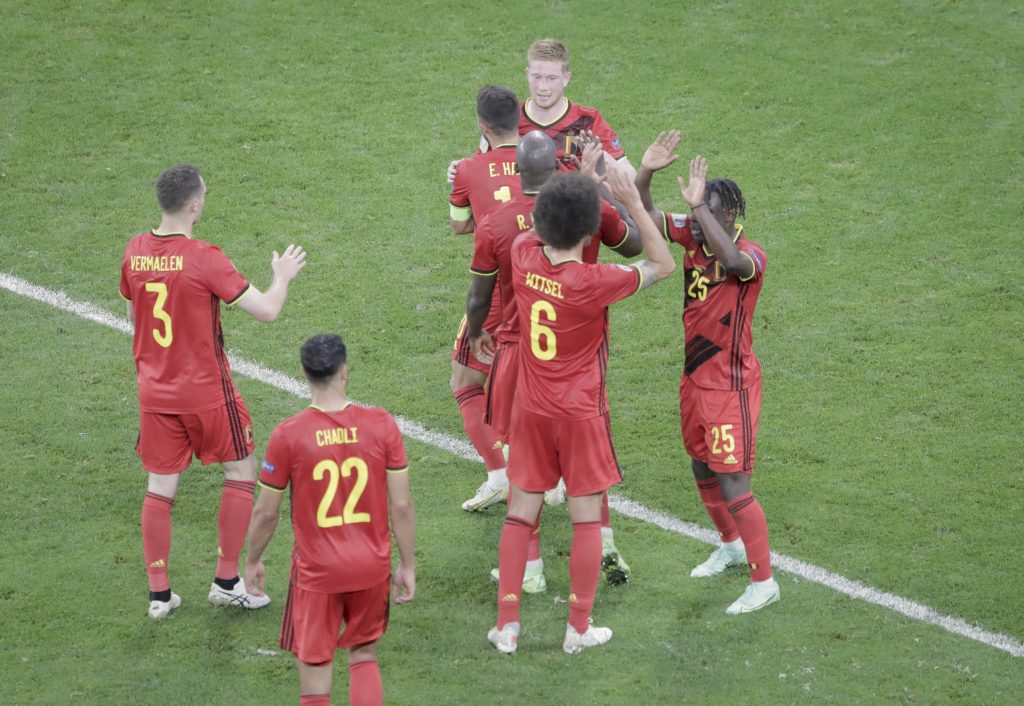 Belgium wrapped up top spot in Group B with a 2-0 win over Finland in their final Euro 2020group stage game.

The first half was one-way traffic, with Finland evidently looking to stay in the game for as long as possible.

Kevin De Bruyne and Romelu Lukaku saw plenty of the ball, but couldn’t find a way through.

Those same two players combined for the best chance of the opening 45. De Bruyne floated in a wonderful cross for Lukaku, but the Inter Milan forward’s finish was uncharacteristically poor, heading straight at Lukas Hradecky.

Hradecky had to be at his best shortly before half time. Teenager Jeremy Doku drove into the box and struck a shot towards the far corner, but the goalkeeper threw out a strong left arm to turn it away.

The two sides went in at the break level. Finland ended the half without a single attempt, and had just 38% possession. Nonetheless, the scoreline was satisfactory.

The second half continued in the same fashion, with Roberto Martinez’s side continuing to press for an opener.

They came close when Axel Witsel cut back for Eden Hazard, but he was denied by another great save by Hradecky.

Belgium appeared to finally breach the Finnish defence in the 65th minute when De Bruyne’s through ball was finished off by Lukaku, but VAR ruled the goal out because the forward was offside by the tip of his boot.

The Red Devils did eventually get their goal. Thomas Vermaelen’s header came back off the post and went in off the back of Hradecky. It was a cruel blow for the goalkeeper, who had been in brilliant form all night.

Things began to open up in the Finland backline, and it wasn’t long before it was 2-0. De Bruyne and Lukaku combined again, with the latter turning past Daniel O’Shaughnessy and firing into the bottom corner via a small deflection.

This was Lukaku’s third goal of the tournament, taking him joint top of the goal charts with Cristiano Ronaldo, Patrik Schick, and Georginio Wijnaldum.

The victory sealed Belgium’s spot at the top of the group. As for Finland, they finish in third place following Denmark’s win against Russia.

It remains to be seen whether they have done enough to qualify for the knockout stage.

Lukas Hradecky (8/10) – Made a number of excellent saves to keep Belgium out. Incredibly unlucky with the own goal.

Jukka Raitala (6/10) – Managed to keep Hazard quiet, but got beaten by Vermaelen in the air for the opener.

Joona Tiovio (6/10) – Helped keep the score down for most of the game. Struggled after the first goal.

Paulus Arajuuri (7/10) – Came under wave after wave of Belgian attacks but repelled most of them.

Daniel O’Shaughnessy (6/10) – Allowed Lukaku to turn past him far too easily for his second goal. Solid otherwise.

Jere Uronen (7/10) – Part of a backline that held firm against a world-class attack. Substituted on 70 minutes.

Robin Lod (5/10) – Couldn’t keep the ball against Belgium’s midfield, which did little to relieve the pressure.

Tim Sparv (6/10) – Helped defensively, but struggled to maintain any control in midfield. Substituted on 59 minutes.

Glen Kamara (5/10) – Much like Sparv and Lod, didn’t do enough to maintain possession.

Joel Pohjanpalo (5/10) – Hardly got a touch of the ball amid Belgium’s territorial dominance.

Teemu Pukki (5/10) – Worked hard and occasionally got in some good positions, but clearly not at his sharpest.

Thibaut Courtois (6/10) – Not forced into any saves of note.

Dedryck Boyata (6/10) – Had a fairly comfortable night. Not given much of a challenge by Pukki and Pohjanpalo.

Jason Denayer (6/10) – Also left with very little to do all game. Dealt with any threat.

Thomas Vermaelen (7/10) – Didn’t have a whole lot to do at the back. Terrific header in the lead up to the opening goal.

Leandro Trossard (7/10) – Energetic down the right and provided plenty of threat in an unfamiliar role.

Kevin De Bruyne (8/10) *MOTM* – Always looked like the one most likely to unpick the lock. Got himself an assist and unlucky not to have one or two more.

Axel Witsel (7/10) – Good on the ball and quick to win it back. Vital to helping his side dominate possession.

Nacer Chadli (6/10) – Showed a lot of attacking intent, but some of his crosses were poor.

Jeremy Doku (7/10) – Looked very bright on the wings. Unlucky to be denied by an excellent save.

Romelu Lukaku (8/10) – Up against a Finland defence intent on sitting back, he made it as difficult as he could for them. Had a goal harshly ruled out for a marginal offside, but eventually got his reward.

Eden Hazard (5/10) – Had one shot very well saved, but was otherwise fairly quiet. Clearly a long way from his best.