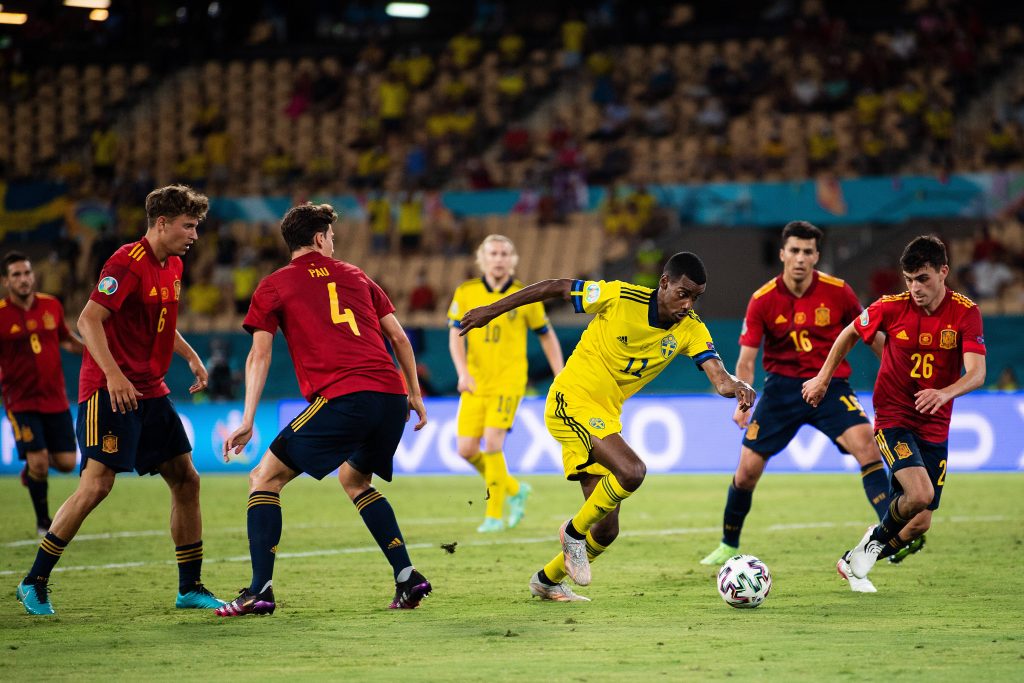 Spain and Sweden played out a rather entertaining 0-0 draw at Euro 2020 on Monday, with both sides missing big chances.

Spain made a bright start to the game and came closest to opening the scoring in the 16th minute.

Koke swung in an inch-perfect cross for Dani Olmo, but the RB Leipzig man’s header was brilliantly kept out by goalkeeper Robin Olsen.

He continued to be involved, twice finding himself in good positions. The first time he fired narrowly wide, and the second time he struck over from Olmo’s low cross.

Spain’s biggest chance came seven minutes before the break. Alvaro Morata found himself clean through on goal after Marcus Danielson made a mess of a clearance, but the former Chelsea forward placed his effort wide of the target.

Despite their dominance, La Furia Roja could not get a goal in the first half and almost fell behind against the run of play.

Alexander Isak bullied Aymeric Laporte and made some space for himself inside the box.

The youngster’s shot was blocked on the line by Diego Llorente, who turned the ball onto the post.

The two sides went in at the break level at 0-0. Sweden ended the half with just 16% possession and one shot on target but had also come closest to scoring.

After half-time, Morata was once again guilty of squandering a good opportunity, dragging wide after some great work from Barcelona midfielder Pedri.

Sweden continued to show little attacking threat but almost snatched a goal on the counter-attack.

Isak again did brilliantly, wriggling away from three men before crossing low for strike partner Marcus Berg. But with a simple tap in, the forward sliced his shot wide.

That was their last chance of the evening, and they spent the remainder camped inside their own final third.

Olmo had an effort well blocked by Lindelof, but Luis Enrique’s side found it difficult to create openings.

That was until injury-time when they squandered two glorious chances to win it.

The first came when substitutes Pablo Sarabia and Gerard Moreno combined, with the former crossing for the latter. However, Olsen denied Moreno’s close-range header with his right leg.

Then, in the dying second of the game, Sarabia had a chance of his own. Pedri chipped a beautiful ball over for club teammate Jordi Alba, who crossed for Sarabia at the back post.

However, the midfielder was caught off guard, and the ball hit him and fell into the arms of Olsen. Had he been able to get a clean contact, he surely would have nicked a winner.

The fixture was the first 0-0 of the tournament. The two sides go second and third in Group E, following Slovakia’s win over Poland earlier.

Diego Llorente (6/10) – Rarely threatened but made a crucial block to stop Isak from scoring.

Aymeric Laporte (6/10) – Struggled with the physical threat of Isak for his chance but otherwise coped fine.

Jordi Alba (7/10) – Always looking to get forward and provide threat down the left. Created a glorious chance for Sarabia in injury time.

Rodri (7/10) – Held things together in the middle of the park. Strong in the tackle and composed on the ball.

Koke (7/10) – Heavily involved in the first half, creating Spain’s best chance of the night. Mellowed a bit after the break.

Ferran Torres (6/10) – Helped keep possession but didn’t produce much in the final third.

Alvaro Morata (4/10) – A really poor showing. Missed two good chances and struggled to hold the ball up. Could be dropped next time out.

Dani Olmo (7/10) – Always involved, got into some good areas and created some chances. Will have been disappointed not to have scored an early header.

Mikael Lustig (7/10) – Coped well with the attacking threat of Alba. Came off injured with 15 minutes remaining.

Marcus Danielson (6/10) – Failed to deal with an Alba cross which allowed Morata through on goal. Other than that, a decent showing.

Victor Lindelof (7/10) – Came under a lot of pressure but never crumbled. Perhaps lucky that Spain were wasteful.

Ludwig Augustinsson (6/10) – Didn’t do enough to prevent the threat from out wide, allowing too many crosses in from the right.

Sebastian Larsson (6/10) – The veteran played with the energy of a much younger man but did very little going forward.

Albin Ekdal (6/10) – Got overran in the middle of the park, up against a technically brilliant Spanish midfield.

Kristoffer Olsson (7/10) – Never stopped running, which greatly helped his side at the back. Went off early with an injury, although it may have just been cramp.

Emil Forsberg (5/10) – Barely got a touch of the ball as Spain dominated possession. Unable to produce his best stuff.

Marcus Berg (5/10) – Largely ineffective and missed an absolute sitter to give his side the lead.

Alexander Isak (8/10) – Made the most of every time he got on the ball. So unlucky not to score and should have had an assist.