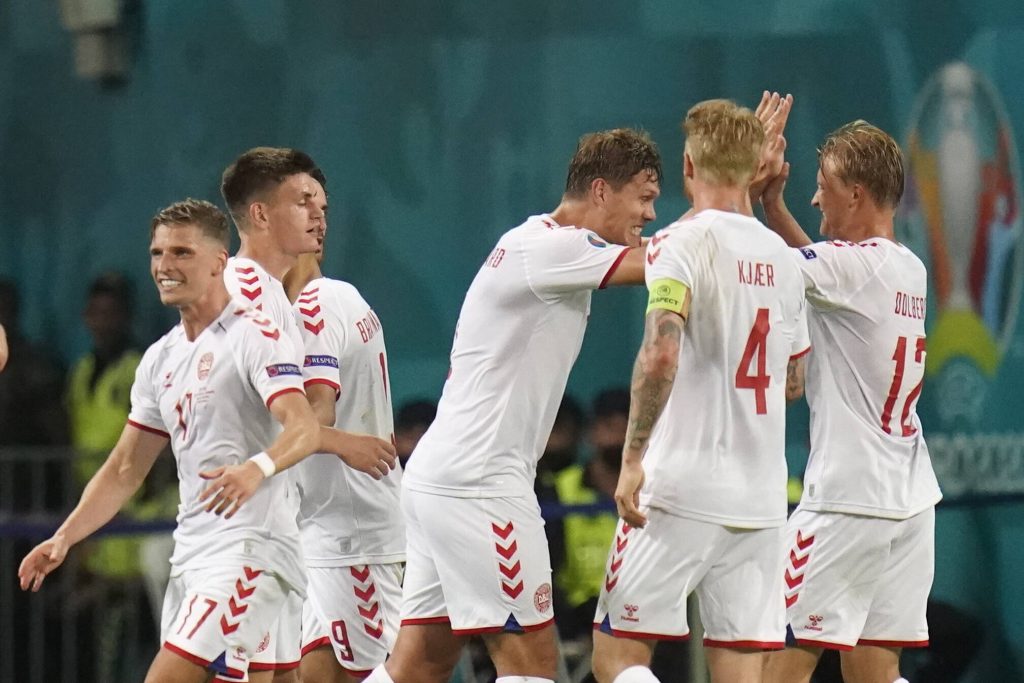 Denmark defeated Czech Republic 2-1 in an eventful quarter-final in Baku on Saturday.

The Danes made the perfect start to the game, taking the lead in the fifth minute. Jens Stryger Larsen’s corner found Thomas Delaney unmarked ten yards out, and he planted his header into the bottom corner.

They looked to extend their lead and twice came close in the next ten minutes. First, Pierre-Emile Hojbjerg floated a beautiful through ball over the top for Mikkel Damsgaard, but he couldn’t finish when through on goal.

Then Delaney found himself in another good position from a Stryger Larsen cross, but the Borussia Dortmund midfielder couldn’t direct his effort on target.

But it wasn’t all one-way traffic. Petr Sevcik volleyed over the crossbar from inside the box, and Kasper Schmeichel was forced into action to deny Tomas Holes after being slipped through by Lukas Masopust.

But Denmark continued to have the better of the chances. Damsgaard drove towards goal and got himself into the box but saw his effort beaten away by Tomas Vaclik.

Shortly before half time, they did manage to double their advantage. Joakim Maehle got down the left and swung in an inch-perfect cross with the outside of his right boot for Kasper Dolberg, who tapped in from close range for his third in the knockout stage.

Czech Republic came out fighting in the second half, and they almost pulled one back immediately.

Antonin Barak volleyed an effort into the ground and towards the bottom left corner, but Kasper Schmeichel was across quick to divert it wide.

But three minutes later, they managed to halve the deficit. Vladimir Coufal crossed for Patrik Schick, who turned the ball into the bottom corner.

This was his fifth of the tournament, taking him level with Cristiano Ronaldo in the race for the Golden Boot.

They pushed for an equaliser but looked vulnerable on the counter-attack. Vaclik twice had to be at his best to deny substitute Yussuf Poulsen when faced with shots from outside the box.

Vaclik was called into action again in the final ten minutes when Poulsen rolled Maehle through on goal.

The full-back had the option to cut it back for Martin Braithwaite but opted to shoot at the near post and saw his attempt saved for a corner.

The closing stages were nervy, but Denmark managed to hold out for a 2-1 win. They will face England or Ukraine in the semi-finals at Wembley.

Tomas Vaclik (7/10) – Couldn’t do much about either goal. Made a few saves to keep the scoreline close.

Vladimir Coufal (7/10) – Given a tough time by Maehle in the first half, but managed well in the second and got an assist.

Ondrej Celustka (5/10) – Struggled to deal with the Danish attack in the first half. Improved after the break before being substituted with an injury.

Jan Boril (5/10) – Didn’t do enough to counter Denmark down his side and added nothing going forward.

Tomas Holes (5/10) – Way below the standard he produced against Netherlands. Substituted at half time.

Tomas Soucek (6/10) – Battled and scrapped in the middle of the park and had good spells but sometimes couldn’t cope against Delaney and Hojbjerg.

Lukas Masopust (5/10) – Played one good through ball but did little else. Substituted at half time.

Antonin Barak (6/10) – Got into some good areas and looked threatening. Didn’t quite make the most of these positions.

Petr Sevcik (5/10) – Struggled to have an impact on the game. Created very little.

Patrik Schick (7/10) – Starved of service in the first half but managed to get his side a vital goal back early in the second.

Kasper Schmeichel (7/10) – Quick off his line, good with his distribution, claimed some crosses and made a few saves. A good all round performance.

Jens Stryger Larsen (8/10) *MOTM* – Got himself an assist in the fifth minute and provided plenty of threat down the right.

Andreas Christensen (7/10) – Came under a lot of pressure in the second half but held firm.

Jannik Vestergaard (7/10) – Much like Christensen and Kjaer, faced some pressure but rarely buckled. Could maybe have got tighter to Schick for his goal.

Joakim Maehle (8/10) – Got arguably the assist of the tournament with an incredible cross for Dolberg. Always positive down the left.

Pierre-Emile Hojbjerg (7/10) – Ran the show in the first half. Didn’t control things in the same way after the break but helped limit the number of chances Czech Republic could create.

Thomas Delaney (7/10) – Scored an early goal with a good header and had a very impressive first half. Didn’t have the same impact after half time.

Martin Braithwaite (5/10) – Caused a few problems with his pace but wasn’t effective enough in the final third.

Kasper Dolberg (7/10) – Provided a threat and got himself a goal. Substituted at 60 minutes.

Mikkel Damsgaard (7/10) – Looked very bright in the first half and had two chances to score. Substituted at 60 minutes.