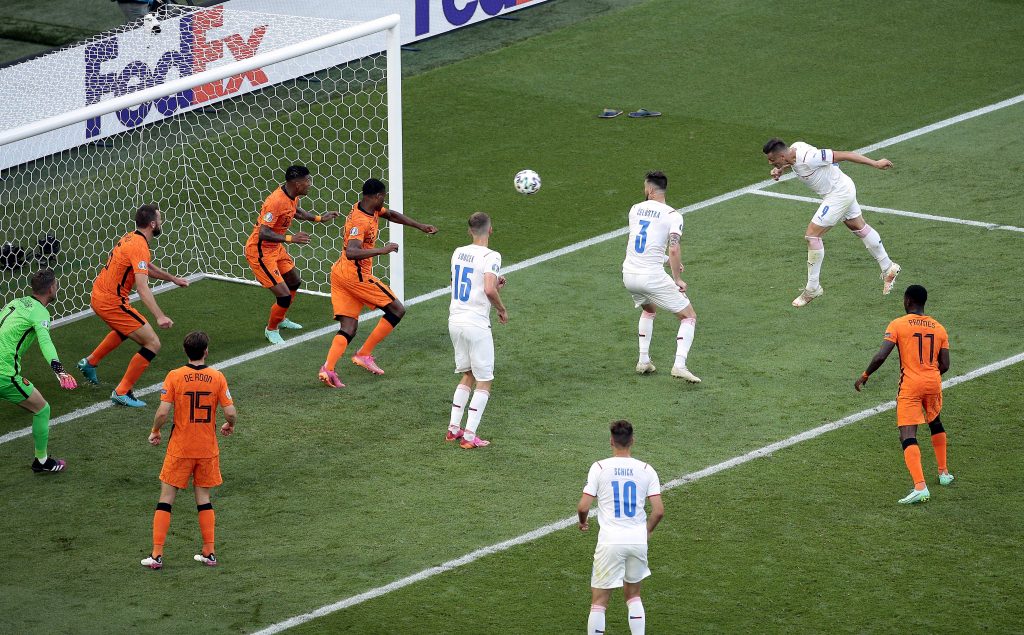 Czech Republic pulled off a shock victory in the round of 16, knocking out Netherlands with a 2-0 win on Sunday.

The Dutch began the game on the front foot, dominating possession in the middle of the park.

They almost took the lead when Matthijs de Ligt’s back-post header missed the target, although replays showed that the Juventus man was offside anyway.

Czech Republic worked their way back into the game, with Tomas Soucek glancing a header wide and Antonin Barak having a shot deflected over by De Ligt.

The two sides went in goalless at the break, but it was an open half nonetheless.

Early in the second half, Netherlands had a huge chance to take the lead. Donyell Malen skipped past two defenders and went through on goal but was tackled when he tried to round goalkeeper Tomas Vaclik.

This was a missed opportunity that proved to be crucial, as the defining moment of the game came just seconds later.

De Ligt slipped under pressure from Patrik Schick and handled the ball to deny him going through on goal.

The defender was initially given a yellow card, but VAR overturned the decision, and Frank de Boer’s side went down to ten men.

Czech Republic took control thereafter. Their dominance began with a huge chance for Pavel Kaderabek at the back post, but he was denied by a block from Denzel Dumfries.

They took the lead soon after. Tomas Kalas headed a free-kick across goal to Tomas Holes, who nodded in from close range to give his side a shock lead.

Despite taking the lead, Czech Republic were not deterred from attacking and later got a second goal.

Holes was influential again, bursting into the box before cutting back for Schick, who finished at the near post for his fourth goal of the tournament.

The game finished 2-0, eliminating Netherlands in the round of 16. Czech Republic will face Denmark in the quarter-finals in Baku.

Maarten Stekelenburg (5/10) – Not much he could have done about the goals but had a few shaky moments.

Matthijs de Ligt (4/10) – Had a good first half. Got himself sent off with a slip and handball early in the second half.

Daley Blind (6/10) – Can’t be blamed for either goal. Comfortable on the ball.

Patrick van Aanholt (5/10) – Got into several good areas but was wasteful with his final ball.

Marten de Roon (6/10) – Had a tough battle with Soucek which he often came out on top in. Struggled after the red card before being substituted.

Frenkie de Jong (5/10) – Played well in the first half but got dominated after the red card.

Georginio Wijnaldum (4/10) – Anonymous going forward. Too easily beaten to the ball by Holes for the second goal.

Memphis Depay (5/10) – A quiet afternoon. Had a couple of moments in the first half but did very little after the break.

Donyell Malen (6/10) – Looked lively. Squandered a glorious chance to give his side the lead after some excellent dribbling. Subbed off after De Ligt’s red card.

Tomas Vaclik (7/10) – Made one vital tackle to deny Malen with the score at 0-0 just seconds before the red card and arguably won his side the game.

Vladimir Coufal (7/10) – Didn’t let much past him and showed plenty of attacking intent.

Tomas Kalas (8/10) – Battled at the back and rose well to assist the opening goal.

Pavel Kaderabek (6/10) – Didn’t have it easy up against Dumfries and sometimes got beaten but coped well enough.

Tomas Holes (8/10) *MOTM* – Came up against a solid midfield and coped excellently. Bagged the opener and put in some brilliant work to assist the second.

Antonin Barak (7/10) – Often bright and in promising areas. Should have done enough to keep his place in the starting XI for the quarter-finals.

Petr Sevcik (6/10) – Found a lot of space and created a chance for Barak before half time. Not always potent enough.

Patrik Schick (8/10) – Made it hard for the Dutch defence and took his goal very well. Also contributed to the red card with some good pressing.