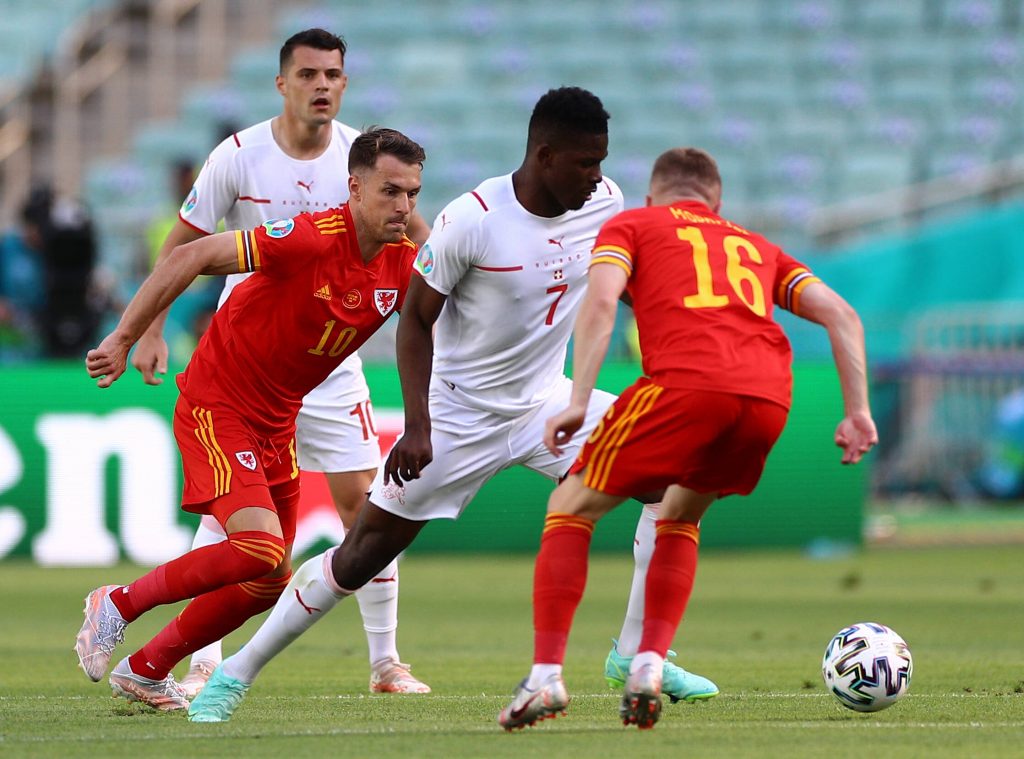 Wales and Switzerland played out a tight draw in their opening game of Euro 2020 on Saturday.

It was an open first half which Switzerland had the better of. However, it was Wales who came the closest to opening the scoring before the break.

Daniel James got down the left and swung in an excellent cross for Kieffer Moore. The Cardiff City forward headed towards the far corner, but Yann Sommer produced a fine save to tip over.

Down the other end, Fabian Schar had a flick from a corner saved by Danny Ward, and Haris Seferovic twice missed the target with shots inside the box.

Just before the whistle, Vladimir Petkovic’s men had a glorious chance to take the lead when Breel Embolo laid off for Seferovic, but the 29-year-old’s shooting was once again wayward.

The chances continued to come for Switzerland in the second half, with Embolo coming flying out of the traps. The forward burst through the Welsh defence but was denied by the left hand of Ward.

However, from the resulting corner, Embolo managed to break the deadlock. Xherdan Shaqiri’s corner found the Borussia Monchengladbach striker, and he nodded into the net.

He continued to provide the threat for the Swiss, finding a way through before teeing up Kevin Mbabu.

Switzerland were eventually made to pay for their missed chances, as the Dragons found an equaliser. A set-piece routine worked to perfection as Joe Morrell’s cross was glanced into the far corner by Moore.

It was a tense ending to the game, and substitute Marco Gavranovic thought he had nicked a winner when he volleyed home from close range. Replays showed that the striker was offside, and VAR ruled the goal out.

There was still enough time for one last Switzerland chance, but Embolo’s header was kept out by Ward, securing a point for Wales in their opening game.

The draw takes both sides into second and third in their group, following Italy’s win over Turkey last night.

Danny Ward (7/10) – Made a few good saves and could do little about the goal.

Connor Roberts (6/10) – Looked good going forward but was beaten to the header that Embolo scored from.

Chris Mepham (6/10) – Defended well enough but was sometimes given a tough time by Embolo.

Joe Rodon (7/10) – The best of the Welsh backline. Headed several crosses away.

Joe Allen (6/10) – Did what you’d expect of him. Kept possession reasonably well and won the ball a few times.

Joe Morrell (6/10) – Held his own in the biggest game of his career so far. Put in a good cross for Moore’s equaliser.

Aaron Ramsey (5/10) – Didn’t produce enough of what we know he’s capable of. More will be expected of him next time out.

Gareth Bale (4/10) – Anonymous going forward. Wales will need their star man to step it up if they wish to get close to the heroics of 2016.

Kieffer Moore (7/10) – Was often isolated up front but put in a battling performance. Scored with a great header and was close to another in the first half.

Daniel James (7/10) – A constant threat down the left, causing havoc in the Swiss defence with his pace.

Fabian Schar (6/10) – Came close with a clever flick in the first half. Picked up a yellow card for a cynical foul on James.

Manuel Akanji (7/10) – Enjoyed a physical battle with Moore and dealt well. Passing out from the back was good.

Kevin Mbabu (6/10) – Defended fine but was wasteful in the final third.

Remo Freuler (6/10) – Part of a Swiss midfield that came out on top for most of the match. Didn’t particularly stand out.

Ricardo Rodriguez (7/10) – Coped with the threat of Bale admirably and provided some threat going forward.

Xherdan Shaqiri (7/10) – Put in some excellent crosses from set-pieces and assisted the opening goal. Didn’t do enough from open play.

Breel Embolo (8/10) *MOTM* – Created a great chance for Seferovic just before half-time. Exploded into life after the break, getting the opening goal.

Haris Seferovic (6/10) – Battled, held the ball up well, and combined with Embolo on a few occasions. However, his shooting was poor, failing to hit the target with any of his four attempts.