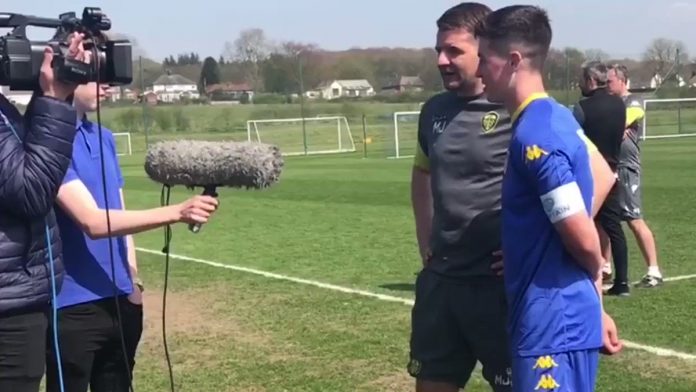 Exciting young winger Robbie Gotts is all set to sign a new contract at Leeds United.

The Whites’ managing director, Angus Kinnear, has confirmed that Gotts, whose existing deal is due to expire at the end of this season, is close to signing a new contract at Elland Road.

Leeds would be due training compensation if the winger leaves the club for nothing, but it seems the 19-year-old winger will sign a contract extension with the Championship leaders.

While speaking to BBC’s West Yorkshire Sport Dailyshow on Wednesday, Kinnear revealed that Gotts and other players are in line for a new contract at the club.

“There’s a plan for everybody at the club at the moment,” said Kinnear. “The overarching principal was that we wanted people to focus on this season and then talk at the end of it about renewals.

“But nobody in the squad is, or should be, under any doubt of how valuable they are to the team and that we believe they’re part of the long-term vision. So it’s a formality in terms of agreeing the figures and signing the deal, versus whether they’re going to be here or not.

“I think Victor [Orta, the director of football] and Marcelo [Bielsa, the manager] have done a lot to reassure those players of where their future lies.

“But at the same time we have signed some of the younger players, and Robbie will be signing a new contract this week. He is a player with a really exciting future.”

Gotts is a highly talented versatile winger, and he has featured in several of Leeds’s match day squads this season. However, he is yet to make his senior debut under Marcelo Bielsa.

The club clearly wants to keep him at Elland Road, but Leeds are expected to bring new players in his position in the summer transfer window.

The Yorkshire club were heavily linked with a move for Swansea City’s Daniel James in January, but the Welsh winger was denied a deadline day move to Elland Road.