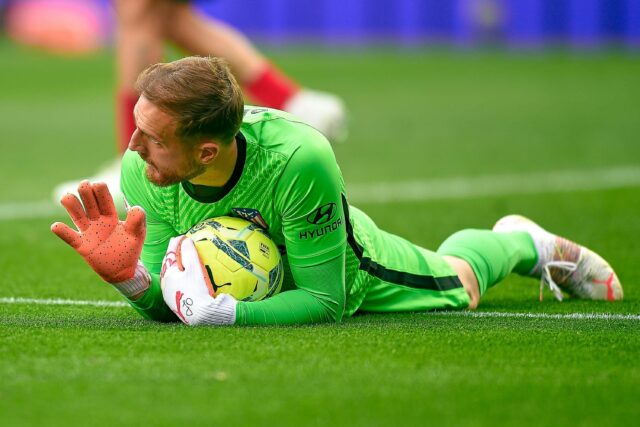 When life gives you lemons, you better do anything except raising your hopes on what The Sun may offer you – even if it’s an exclusive – plucked from thin air.

The popular tabloid has come up with a juicy transfer story today. It claims that Manchester United will (strong affirmation rather than probability – would, could etc) make an ambitious move for Atletico Madrid keeper Jan Oblak in the summer transfer window.

Oblak is a top-class goalkeeper and would be a fantastic signing for the Red Devils.

The 28-year-old would cost around £70 million. However, United have come up with a smart transfer plan to get him on board – they want to include David de Gea as a part of the deal.

The report says that the move would (back to probability) appeal to De Gea, who came through the ranks at Atletico.

De Gea’s recent form has been a concern, with Dean Henderson emerging as a serious contender to grab the #1 position at Old Trafford.

United want to get rid of the Spaniard, who missed the crucial 22nd penalty in their Europa League final shootout defeat to Villarreal on Wednesday.

More importantly, the club want his huge £375,000-a-week wages off their books.

From United’s perspective, the deal makes a lot of sense. But what about from Atletico’s point of view?

Why on earth would Atletico want to sign a 30-year-old “blundering” goalkeeper when they have someone who has just won a La Liga title?

Why would Diego Simeone part ways with someone who has been at the club since 2014 and has been a backbone for his team?

Of course, money talks. A direct offer would have led the Rojiblancos into thinking, but they will probably scratch their heads in disbelief after getting such a proposal.

Well, at least The Sun mentioned that it’s an “ambitious” plan. This is going to be a long summer!