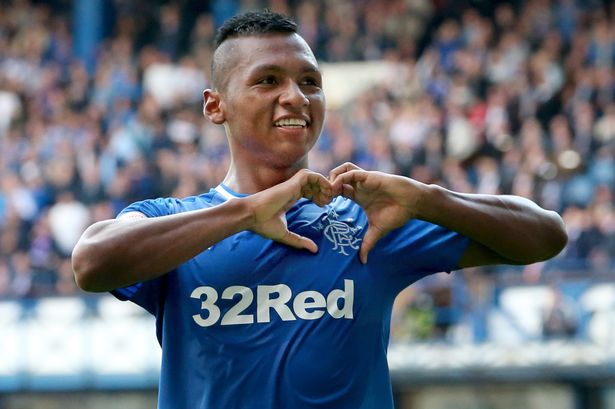 Rangers’ caretaker manager Graeme Murty has forced striker Alfredo Morelos to do extra target practice in a bid to end his goal drought.

The Colombian’s start to life at Ibrox kicked off in phenomenal fashion as he scored eight goals in his first nine games for Rangers. But Morelo has failed to find the net since scoring in a Scottish Premiership tie against Patrick Thistle back in September.

His lack of form is evident on the pitch as he failed to bury a string of goal scoring opportunities in Rangers’ shock defeat against Hamilton on Saturday. In order to bring back his poaching instincts, Murty has devised a series of training drills that will hopefully get the 21-year-old back amongst the goals.

“So Alfredo knows he has the support of his team-mates and the coaching staff.

“We’ve done some work on finishing this week and he’s been bright, he’s been lively.

“Looking at his body language you wouldn’t think that confidence is an issue. Alfredo is a centre-forward who lives to score goals, so he’ll be hurting.

“But we have a perfect opportunity on Friday to put that right. Potentially (he has been trying a little too hard) but he’s only a young man and we have to remember that.

“What we have to do is put him in situations in training that is going to replicate games, so that he becomes more comfortable. Then when he sees that picture on a match-day he is really composed and hits the target.

“I’m sure when he gets one goal, he’ll go on another fantastic run for us.”

Rangers’ next Premiership fixture will see them play Dundee at Dens Park on Friday.