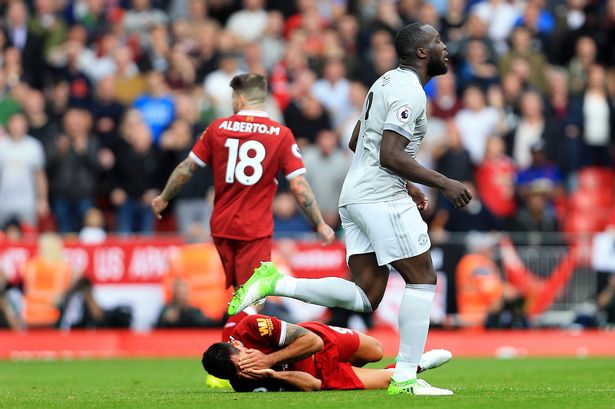 Liverpool and Manchester United had to settle for a dull 0-0 draw when the two sides met at Anfield in the Premier League on Saturday.

Despite the match being a dull affair, an incident involving Dejan Lovren and Romelu Lukaku has caused much stir among both sets of fans. The two players were involved in a scuffle just before the half time interval, resulting in Lovren rolling on the floor holding his face. The Croatia international has accused Lukaku of deliberately kicking him.

Referee martin Atkinson did not issue a red card to Lukaku, much to the annoyance of Liverpool boss Jurgen Klopp who thought Lukaku “maybe” deserved to be sent off.

“My honest view is that he did it on purpose,” Lovren said.

“He was over me me, he could have moved away. Even if he did it normally he would apologise after that, but I saw he was nervous during the game so maybe that was also the reason.”

No retrospective action has been taken against the Manchester United striker. When asked whether he was disappointed that the match officials let Lukaku go unpunished, Lovren said: “This is not my decision. I cannot say I am disappointed but it is what it is.

“We need to move on. That is football, part of the game.”

United and Liverpool will both return to the UEFA Champions League group stages this week with the Mancunians scheduled for a match against Benfica in Lisbon while Liverpool will face Maribor in Slovenia.