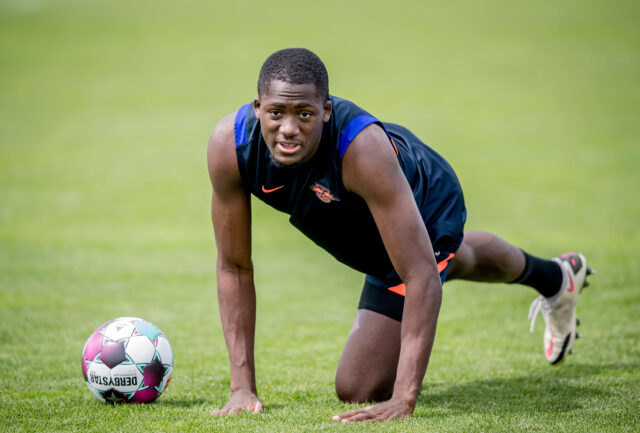 Liverpool are close to signing Ibrahima Konate from RB Leipzig.

According to reports from the Independent, Liverpool have triggered Ibrahima Konate’s £36 million release clause.

Paul Joyce of The Times has confirmed on Twitter that the deal is expected to be finalised in the next 48 hours.

Liverpool expect to complete the transfer of Ibrahima Konate in next 48-hours. Agreements with player on personal terms and also RB Leipzig now in place. Exit clause value is £36m.

The report claims that the defender will become Liverpool’s first signing of the summer. The Reds are trying to put the finishing touches on the deal before the end of the weekend.

The 22-year-old has been the club’s primary defensive target, although The Athletic reported that the Merseyside giants did consider other players like Pau Torres and Duje Caleta-Car.

However, the club view Konate, who has made nearly 100 appearances for Leipzig, as the complete package.

Meanwhile, the Reds have not taken up the option to sign Ozan Kabak permanently for £18m. Kabak joined the Reds on loan from Schalke in January.

Nat Phillips, who was brilliant for the Reds last season, is now pondering whether to remain at Anfield as he could now become the fifth-choice defender at the club following Konate’s arrival.

Ben Davies is also unlikely to stay on Merseyside, having not played a minute for the club. Rhys Williams could move out on loan elsewhere.

According to Fabrizio Romano, Liverpool’s next priority will be to secure long-term deals for some of their key players including Fabinho.

Liverpool are now progressing in negotiations for Fabinho’s new contract, he’s open to stay and extend the agreement. Ibrahima Konaté clause has been triggered and he’s already completed his medical days ago: he’s a Liverpool player, never been in doubt. Official soon. 🔴 #LFC https://t.co/HMqDRtScR8

The 27-year-old is a key player for the club, and Jurgen Klopp will be keen to retain his services.