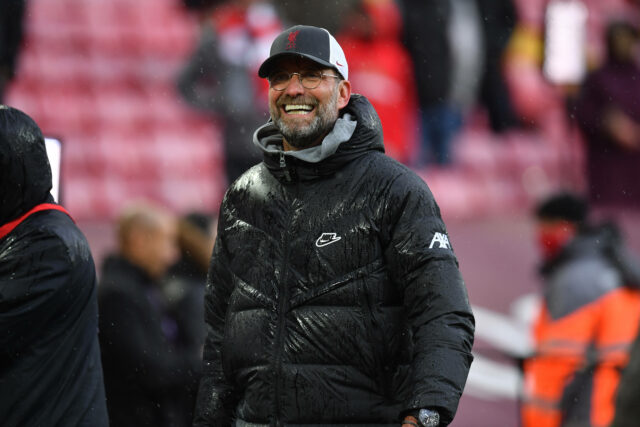 Liverpool are allegedly prepared to smash their transfer record in order to sign Barcelona midfielder Pedri according to a report from OD.

Reds boss Jurgen Klopp failed to bolster his central midfield ranks at Anfield in the summer after losing Gini Wijnaldum to Paris Saint-Germain on a free transfer.

It seems as though the German has identified a player who he believes will improve Liverpool immeasurably.

OD reckon that Klopp is in love with the 18-year-old Spaniard and thinks he is the perfect fit for the way in which he wants his team to play.

The report suggests that the Liverpool manager is particularly impressed with Pedri’s ‘style, pace and vision’.

The 18-year-old only recently burst onto the scene with Barca having graduated from La Masia. And wow, what a player!

In 37 La Liga outings last season, the teenager bagged three goals and three assists. During those appearances, he averaged 1.2 tackles, 0.9 interceptions, 1.1 key passes and 1.5 dribbles per game. He made 45.8 passes on average per match and recorded an impressive completion rate of 87.7%.

He is out of contract at the Camp Nou next summer but the Catalan giants have an option to extend that deal by a further two years.

With Barcelona is such a state financially, they may well be forced to sell Pedri, despite the fact that Ronald Koeman will undoubtedly want to keep him at the club.

£88 million is a serious amount of money. And if FSG are indeed prepared to pay that kind of fee for Pedri, he could well be rocking up at Anfield either in January or next summer.