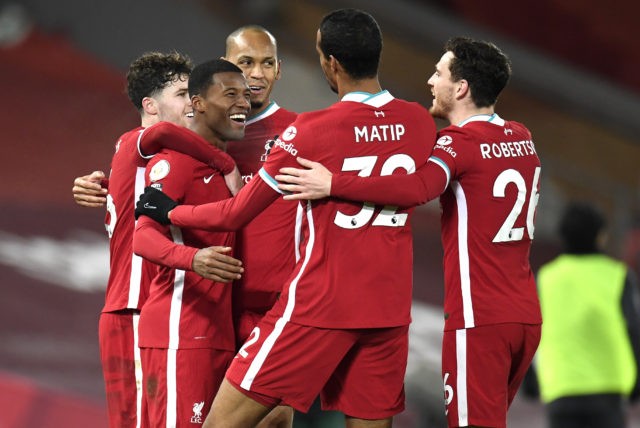 Liverpool welcomed the return of fans with an emphatic 4-0 win against Wolverhampton Wanderers at Anfield on Sunday in the Premier League.

The Reds gave the impression of getting back to their old best as they stretched their unbeaten run at home in the league to 65 games.

Mohamed Salah, Gini Wijnaldum and Joel Matip scored on the night while an own goal from Nelson Semedo took Liverpool to second in the table, joint-top with Tottenham Hotspur, with goal difference separating the two sides.

Salah pounced on an error from Conor Coady to score the opening goal in the first half. Wijnaldum scored from distance with a curler into the top-right corner before Joel Matip’s header and Semedo’s own goal sealed all three points for the home side.

Wolves thought they had been given a life-line to come back into the game when referee Craig Pawson awarded a penalty after Sadio Mane appeared to have fouled Coady. The VAR check showed that there was no contact, and the decision was rightly overturned.

Liverpool players took to social networking site Twitter after the game to express their reactions. Thiago Alcantara – who is still sidelined with a knee injury – has responded to Wijnaldum’s tweet, hailing him as ‘outstanding’.

Hope you enjoyed that one reds 🔥 great feeling to have our 12th man back at Anfield. pic.twitter.com/6y13jOsa5n

A performance for the fans, we’ve missed you ❤️ pic.twitter.com/twlSWgUERj

What a team!! Great to se the fans back at home! 🤩❤️ https://t.co/cYBAwPENsr

Back with a win and fans at Anfield. Perfect. 👌🏽 pic.twitter.com/Z6RKlqv1f0

Hope you all enjoyed that one! +3 ✅ on to the next…… pic.twitter.com/yjjUKA3EVV

Glad to have the fans back at home. Great performance and a special night for everybody. Let's go! 🔴⚽️ pic.twitter.com/6US01zmlGz

The Dutch midfielder has been the epitome of consistency this season for the Reds, appearing in all matches after the international break in November.

He was simply superb against Wolves, and once again reminded everyone why he is such a special player. His overall performance this season has been exceptional, and it raises the debate once again about whether the 30-year-old should be given a long-term deal at the club.

The Dutchman has a contract at the club till the end of the season, and there’s no indication as to whether he will sign a new one.

The former Newcastle midfielder will be free to discuss terms with other clubs from January, but the Reds boss, Jurgen Klopp, is hopeful that he can still persuade Wijnaldum to put pen to paper. In fact, the Reds boss feels that the matter will be resolved soon.

During the summer, Wijnaldum was linked with a move to Barcelona, with Ronald Koeman keen to be reunited with him at the Catalan club.