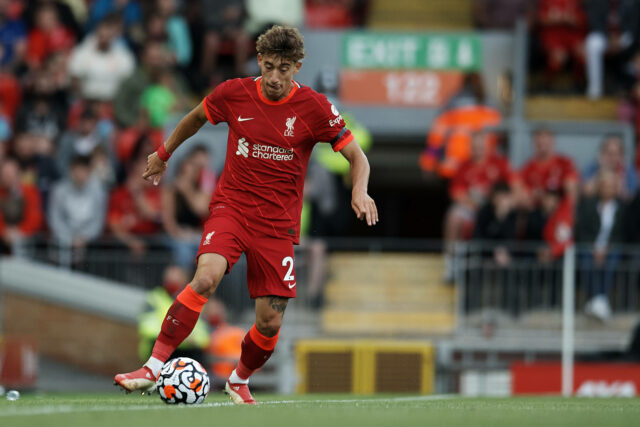 Diogo Jota opened the scoring in the first half for the Reds. Roberto Firmino, who came on for Jota in the second half, increased the lead after being set up by Mohamed Salah.

The Egyptian made it 3-0 with a spectacular goal and became the first player in the Premier League history to have scored in the opening day fixture for consecutive five seasons.

The match also saw the return of Virgil van Dijk who made a comeback after a long injury lay-off.

Check the emotional video from Van Dijk below, who commented after the game what it was like to be absent for so long.

Many Liverpool fans took to Twitter to express their reactions to the performance of left-back Kostas Tsimikas.

The 25-year-old started the game in the absence of Andy Robertson, who is likely to be sidelined for a while after picking up an ankle ligament injury.

Tsimikas, who is on £60k-per-week wages at the club, barely featured last season due to injuries.

He impressed heavily during the pre-season and showed signs of his brilliance against the Canaries.

Tsimikas was brilliant going forward but lost his focus and energy towards the end of the game.

He made a few mistakes in defence, but Liverpool’s senior players quickly made him comfortable.

Many Liverpool fans feel that he will get better with experience and exposure. Here are some of the selected tweets:

Think his delivery going forward is excellent and could be a free kick specialist. His defendsive attributes are suspect at the moment but give him time he’s one of us YNWA

Started well but faded. Clearly a confidence player so the first mistake really effected him

He looked good! As his confidence grows I think he will be making the Robbo runs down the line. He has a mean cross and he is young! So could be the future

Superb….with a little help from the seniors he'll be on his game…the kid has to nly played 6 mins if PL fortball ..so considering, I thought he played well…and a clean sheet

Great attacking on, lost focus abit defensively and made some mistakes. But he kinda disappeared in the last 15 minutes.

Great job seeing its his first full game, but has a few things he needs to improve especially in the defensive end lest he be targeted by wingers

Look a bit lost concentration after 70 minutes, overall solid debut and hopefully he'll build from that