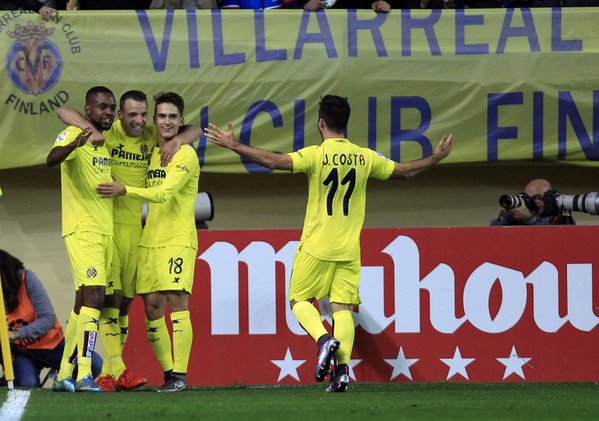 Atletico Madrid level points with Barcelona at the top after the Rojiblancos beat Athletic Bilbao 2-1 at the Vicente Calderon on Sunday. However, rivals Real Madrid couldn’t capitalise on Barcelona’s slip-up as Los Blancos lost 1-0 to Villarreal.

On Saturday, Deportivo came from behind to secure a dramatic 2-2 draw at the Nou Camp. Elsewhere, Sevilla registered back to back league victories, while Malaga move out the relegation zone with a 2-1 victory over Rayo Vallecano. 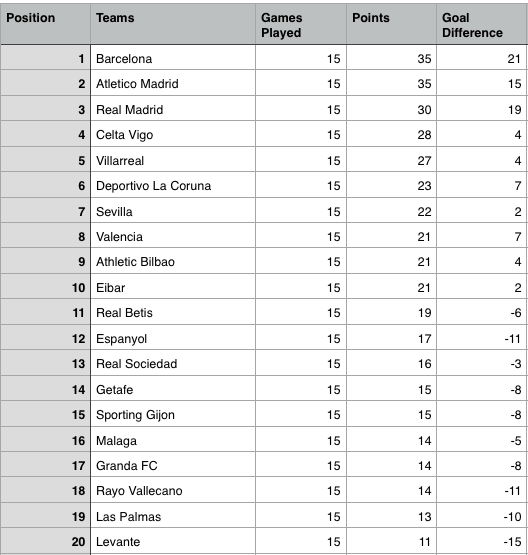 Luis Enrique should be worried with his side’s defence. For the second time in two weeks – Valencia and Deportivo – Barcelona have conceded and dropped points despite taking the lead. It looks perfect when Barcelona enjoy possession, MSN trio scoring for fun, opposition offer no resistance at all, but whenever a little pressure is applied, the defence quickly transforms into a panic mode. After going 2-0 down, Deportivo had little options rather to put bodies forward. Busquets lost possession 3-4 times in the second half and Barca defence all of a sudden were brutally exposed and the visitors took full advantage of it through sharp and well constructed counter attacks.

We had two huge games at the bottom of the table this week. Both Granada and Malaga move out of the relegation zone with victories over Levante and Rayo Vallecano. Another relegation contender Las Palmas earned a crucial 1-0 victory over Real Betis. As it stands, only four points separate seven teams at the bottom.

Iago Aspas is a scorer of great goals

The former Liverpool striker scored a wonderful goal this weekend as Celta Vigo cemented their position within top four, only two points behind Real Madrid. Aspas has scored seven goals so far, which is a decent return for a striker, but the old adage suits perfect for him – he is not a great goal scorer, but a scorer of great goals. His latest goal against Espanyol was a beauty. Check this out here.

Antoine Griezmann in a league of his own

What a season the Frenchman is having for Atletico! 13 goals in all competitions and three assists to follow with – he is on fire at the moment. Griezmann scored against Bilbao, his fifth goal in last five matches, as Atletico level points with Barcelona at the top of the La Liga table.

Sevilla climbing up the ladder quickly

The Andalusian side had a disastrous start to the season, winning just once in their opening six games. Dumped out of this Champions League, lost five games from October to November, and at one point it seemed their season was in tatters under Emery. But they made a quick recovery and are slowly climbing up the table, having won four games, out of last five, drawing the other.

Los Blancos suffered third defeat under Rafa Benitez in their last eight games, when they lost 1-0 to Villarreal. As a result of the defeat, they failed to capitalise on Barca’s slip-up, which only will draw more criticism from the fans and the media. But what has really surprised this season is Real Madrid’s failure to win against the so-called big teams in La Liga. This season, they have lost lost against Barcelona, Villarreal and Sevilla, while managed a draw against Atletico Madrid.