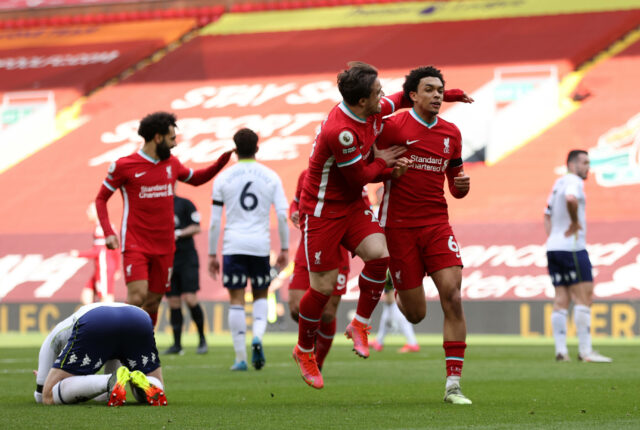 Jamie Carragher has showered heaps of praise on Liverpool right-back Trent Alexander-Arnold after the Reds beat Aston Villa at Anfield on Saturday.

The 22-year-old scored the winning goal in the dying minutes of the match as the Reds came from behind to earn a 2-1 victory on their home turf.

The result was a huge relief for the Reds – who were without a win at Anfield for their past six games.

They have now picked up three wins in a row in the Premier League to keep their top-four hopes alive.

A lot has been said, debated and written about Alexander-Arnold after the youngster was dropped from the England national team by Gareth Southgate.

While football pundits (in general) tend to agree that the Liverpool local boy is a terrific talent and arguably one of the best-attacking right-backs in the world, it is his poor defending that has come into question time and again.

It looked like the Reds would end up with yet another frustrating result on Saturday until Alexander-Arnold unleashed a stunning finish to silence his critics.

Jamie Carragher, who was engaged in a heated debate with Gary Neville regarding Alexander-Arnold’s omission last week, took to Twitter to express his reaction.

Really pleased for @TrentAA he’s had a lot of stick this week, it’s part of the game & growing as a player. Responded in the right on way on the pitch. VAR offsides what can we do??!! #LIVAST

Brilliant late winner from @TrentAA. The advantages of this incredibly talented young man’s play going forward far outweigh the occasional naivety in his defending. He does things only the truly great fullbacks in history can do. I’m sure Gareth will see sense.

During the match, Alexander-Arnold made some excellent tackles. He also made three key passes, produced two clearances and one interception.

In other news, check out Sir Kenny Dalglish’s reaction to Alexander Arnold’s winner.