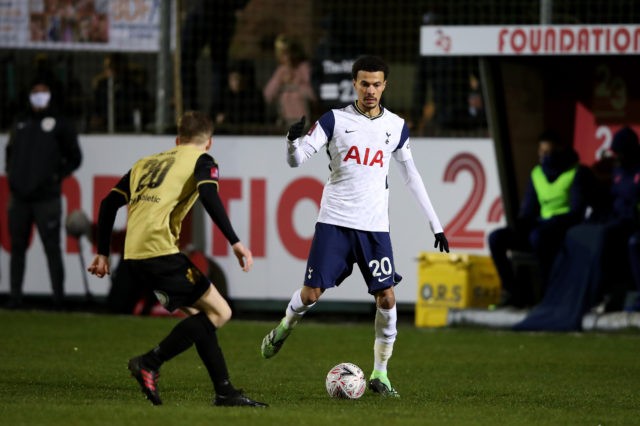 Former Tottenham Hotspur player Graham Roberts has suggested on social networking site Twitter that it was ‘crazy’ to leave Dele Alli to rot on the bench during Spurs’ 1-1 draw against Fulham last night.

The England international was an unused substitute during Spurs’ home draw with London rivals Fulham on Wednesday evening.

The 24-year-old earned rave reviews for his performance against non-league outfit Marine on Sunday where he provided an assist.

Alli, who has been used sparingly by Jose Mourinho this season, was hoping to get some minutes against the Cottagers, but he wasn’t used in the last game.

Sorry not to use dele crazy tonight when needed a goal.

Harry Kane opened the scoring for the north London club, which was cancelled out by Ivan Cavaleiro’s effort in the second half. Spurs dropped to sixth in the Premier League table with 30 points, six points behind leaders Manchester United.

Alli has made only one start in the Premier League this season, and a further three have come from the bench. He has managed only 75 minutes of league football this season, and the lack of game time is frustrating for him.

It is evident that Alli has dropped down the pecking order under Mourinho, and he must leave the club in January to play regularly.

In recent months, Alli has been linked with a move to Paris Saint-Germain on loan, and a potential transfer could see him being reunited with former Spurs manager, Mauricio Pochettino.

Popular pundits like Danny Murphy and Stan Collymore have suggested that Alli would be a good option for Everton as well.