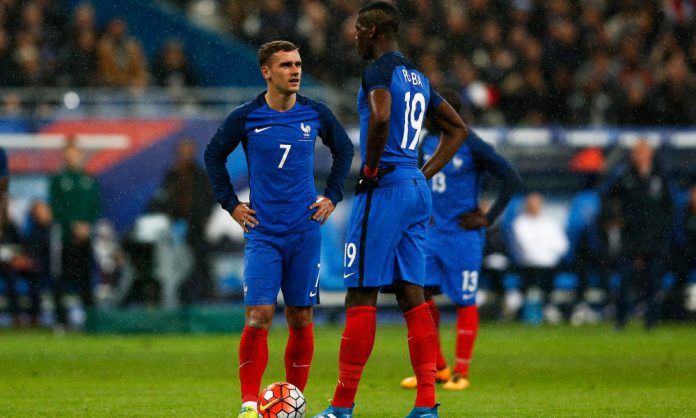 France should have landed the Euro 2016 crown but fell against Portugal at the last hurdle on home soil.

The previous two tournaments, World Cup 2014 and Euro 2012, saw them eliminated at the quarter final stage by the eventual winners.

This recurring theme of missed opportunity has often been set against a backdrop of scandal, in-fighting and over inflated egos.

Currently however, it seems a healthy squad atmosphere has been forged and Les Bleus have the team spirit to match their talent.

After a solid qualifying campaign in a tough group, they will head to Russia confident they can deliver.

The Group C favourites have a fantastic blend of youth and experience within their ranks and abundant world-class players.

The tournament comes at a time when quick, youthful attacking talent seems to be in almost limitless supply.

The transfer fees associated with some of the names on the plane allude to the quality on board.

Paul Pogba is the British record signing while young forwards Dembele and Mbappe both cost well in excess of £100 million.

In goal Hugo Lloris of Spurs will captain the side and should hit 100 caps in Russia. Interestingly, Manchester City’s Benjamin Mendy travels despite having missed almost the entire campaign with injury.

Didier Deschamps is spoilt for choice when it comes to flair in the forward areas.

His decision was made somewhat easier when Dimitri Payet, so influential during the Euros two years ago, limped out of Marseille’s Europa League final defeat. Arsenal’s Laurent Koscielny also succumbed to a serious injury late in the season.

Anthony Martial misses out, seemingly a result of his recent lack of playing time at Manchester United.

Squad rotation similarly affected Manchester City centre-back Aymeric Laporte. Alexandre Lacazette, Adrien Rabiot and Kingsley Coman are among the other big name talents without a seat on the plane.

Captain when France lifted the cup at home in 1998, Deschamps is now is the dugout.

The experienced 49-year-old has tackled some of the problems that previously plagued the side head-on and has gradually cultivated a more harmonious unit, bursting with quality.

His side play high-tempo football and will be brave in pursuit of success this summer.

France will go with 4-3-3 and look to play a fast-paced attacking style to take advantage of the sheer power and athleticism within their ranks.

Much focus will be on who gets the nod in the midfield three positions with Kante likely to operate deepest and Pogba and Matuidi expected to break quickly to support the front line – although it could as easily be Fekir and Tolisso.

Giroud is a favourite of the manager, if not the French public, and will offer a focal point up front supported by the speed and mobility of Griezmann and one other on the flanks.

Among all the star names and high price tags, Griezmann is the one man, in advance of the defensive midfield area, guaranteed to be on the teamsheet.

The Atletico Madrid man has rarely failed to deliver in the blue jersey and was the talisman of the side at Euro 2016. His form this season has been strong and he can open defences with both speed and guile.

One of many young forwards and wide men given a chance by Deschamps, the 21-year-old is blisteringly quick and has fantastic feet.

He has recently enjoyed some more game time at Barcelona after missing a large portion of the season through injury, which should leave him fresher than most.

It could well be that this summer will bring the best from the man who took Neymar’s place in Catalonia.

There is sufficient ability to win the tournament but France must just find the nous to edge out top-quality opponents in big games.

Sheer quality should get them to the last four where Brazil are potential opponents and Les Bleus squad looks just to have the edge on Neymar and co. Beaten finalists.