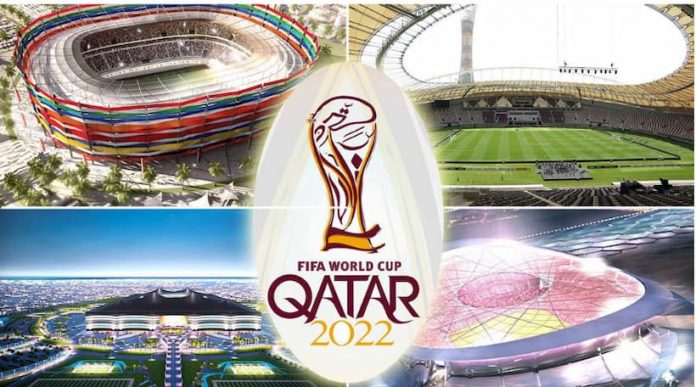 The draw for the 2022 FIFA World Cup takes place this week, following the conclusion of all international friendlies and qualifiers. The remaining places for Qatar will be decided following the last round of qualifiers this week, before the normal football schedule resumes at the weekend.

The 32 spaces are beginning to fill up rapidly for the most prestigious tournament in football, with just a few spaces left for countries to snap up. By the time of the draw on Friday (1st April), 29 of the 32 qualifying spots will have been confirmed.

The updated FIFA World Rankings will also have been confirmed by then, with England already confirmed as one of the top seeds for the tournament.

Here is all you need to know for the upcoming draw for the 2022 Qatar World Cup!

The Group Stage draw for the 2022 FIFA World Cup in will be made at 5pm (BST) on Friday, April 1, at the Doha Exhibition and Convention Center, Doha, Qatar.

By this stage, the vast majority of qualifying will have taken place and 29 of the 32 available World Cup slots will have been confirmed. The three spaces that will not be confirmed until June 2022, are the two nations who qualify through the inter-confederation play-offs and the final spot will go to the winner of the UEFA’s Path A play-off.

The draw will be broadcast live on FIFA’s website, but for UK viewers it will be televised on BBC 1. You can also access it via the iPlayer on your TV or via the iPlayer app on your phone, tablet, laptop or however you usually access it. Coverage will begin at 4.45pm.

How the draw works

The 32 teams that qualify for the World Cup will be drawn into eight groups of four, listed alphabetically from Group A to Group H. Teams will play each other once in the group stages, before the top two from each group progress to the knockout stages in the Round of 16.

However, for this draw the teams will be allocated into the four pots based on the latest round of FIFA World Rankings. The updated rankings are published on Thursday (31st March) before the draw, and the top seven seeds will be drawn into Pot 1, along with the hosts, Qatar.

Pot 2 will then contain the next eight highest ranked teams, while the same will be applied for Pot 3 and Pot 4. However, Pot 4 will also contain the two winners of the inter-confederation play-offs and the winner of the last UEFA play-off, which will not be determined until June 2022, as previously mentioned.

Rules for the draw

As hosts of the tournament, Qatar will be automatically assigned to Group A, while the rest of the seven teams in Pot A will be allocated to Groups B-H in the order they are drawn out. The same process will be applied for Pot B, Pot C and Pot D.

As UEFA have 13 nations competing at the tournament, five out of the eight groups will have two European nations in the same group. This is the maximum amount allowed in one group, so a maximum of two European nations could be pitted against eachother. It is essential that each group has at least one team from UEFA.

The rules are different for all of the other continents, as they aren’t allowed to have more than one of it’s nations in the same group. For example, it is impossible for Brazil and Argentina to be drawn in the same group, as they are two South American countries. The same applies for Asia, Africa and North America.

Who has already qualified for the 2022 World Cup in Qatar?

The majority of teams have already been confirmed for the World Cup. England qualified back in November, after topping their qualifying group. Qatar automatically qualify for the tournament as they are the host nation.

Here is a list of the teams who have qualified for the World Cup:

Inter-confederation play-offs: One team from Asia, South America, North America and Oceania will compete in the play-offs for the final two spots in June

Current seeding (will be updated on Thursday 31st March)

When do the Group Stages begin?

The Group Stage will take place over a period of 12 days, with four matches being played each day. As outlined earlier in this article, each team will play each other once in the group stages. The first match is set to take place on Monday, November 21, 2022 at the Al Bayt Stadium. This will feature the hosts Qatar in a Group A fixture.