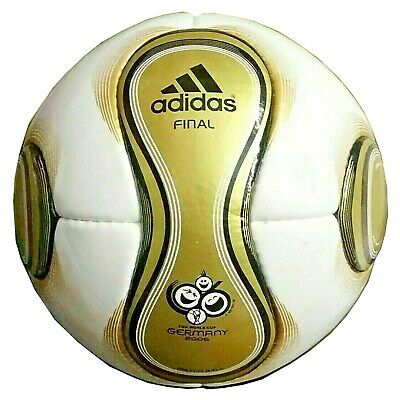 Now that the Qatar 2022 World Cup Official Match Ball has been revealed, let’s have a look at seven of the greatest match balls in the competition’s history.

Over the years, Adidas has created some truly ingenious designs for the World Cups. From the Azteca to the Teamgeist to the Tricolore, official World Cup match balls have gone from strength to strength.

So let’s take a look at seven official match balls that standout.

The 1974 World Cup ball was a variation on the ball that we saw at the 1970 World Cup. The Durlast swapped the previous iteration’s gold text for a plainer black. It also came with an all-white version that was used in some of the game.

A truly retro look, the Tango originally debuted at the 1978 World Cup and went through slight variations during the 1982 competition. However, nothing can get the better of the one we saw in 1978.

Paying home to Mexico’s Aztec history at the 1986 World Cup, the Azteca was the first ever fully synthetic match ball used in the competition. And yes, this was the same ball that was used by Diego Maradona in every way imaginable against the English.

To be honest, we are big fans of the official match ball that was used at the 2006 World Cup in Germany. The greatest technological breakthrough about this ball was that the Teamgeist used 14 rounded panels rather than the conventional 32. In fact, Adidas claimed that this football was the most perfectly round one of its kind.

The Tricolore was going to be the last official match ball in the rich history of World Cups during the 20th century. Really unique in a sense that it was full of colors, the ball became quite a hit in France.

When the Samba nation is hosting a World Cup, the official match ball has to be unique as well. And that’s exactly what Adidas gave us in the shape of Brazuca. Interestingly enough, Brazuca was the first official match ball that was named by supporters.

Nothing can ever beat the design of the Fevernova – a perfect official match ball for the first ever World Cup in Asia. The look broke free from tradition in a place where football was set to enter a new era.