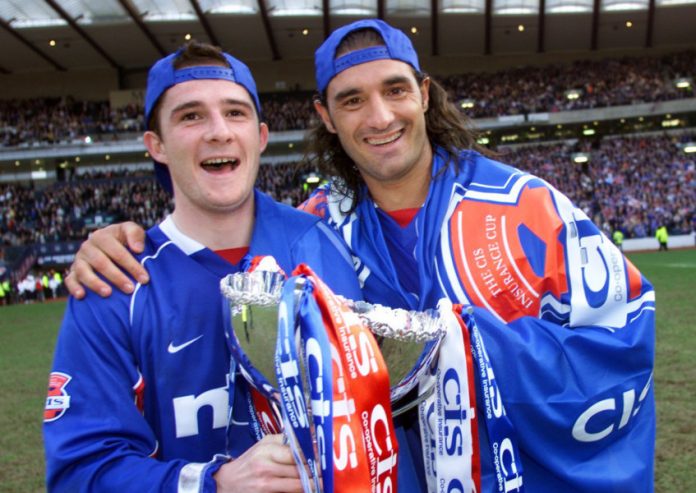 Former Rangers captain Barry Ferguson has revealed that there was no falling out with Lorenzo Amoruso during their time together in Glasgow.

Amoruso, who joined Rangers from Fiorentina back in 1997, had been captaining the Light Blues for two years when Dutch manager Dick Advocaat took over the club. Advocaat decided to shake things up at Ibrox by stripping Amoruso off the captaincy and giving the armband to Ferguson who was just 22 at the time. The former Scotland international won 15 major trophies during his two spells at the club.

Amoruso was known to be critical of handing the captaincy to Ferguson which later led to rumours that there was animosity between the pair. But Ferguson, in an exclusive interview with Si Ferry, has categorically denied such rumours.

“It was an opportunity that I couldn’t knock back. It was my dream. To go on and play for Rangers and become a regular was great, but to become captain was unbelievable. It was a no brainer,” said Ferguson.

“There were probably a couple of reasons why he [Advocaat] gave me it. I’d got into a couple of bits of trouble before that, and it was maybe to mature me a little bit and make me realise the potential that I had. Also, he would have seen the passion that I had and how much I wanted to win.

“There were a few looks in the dressing room, seeing as I was only 22. But they were great, a few handshakes and then we got back to concentrating on winning.

“There was no fall-out. He [Amoruso] took it like a man. Obviously he was disappointed but there were no issues.”

The ex-Clyde boss insisted that Amoruso was a winner before adding that despite their rivalry, which was often construed as animosity, he quite enjoyed his time with the Italian.