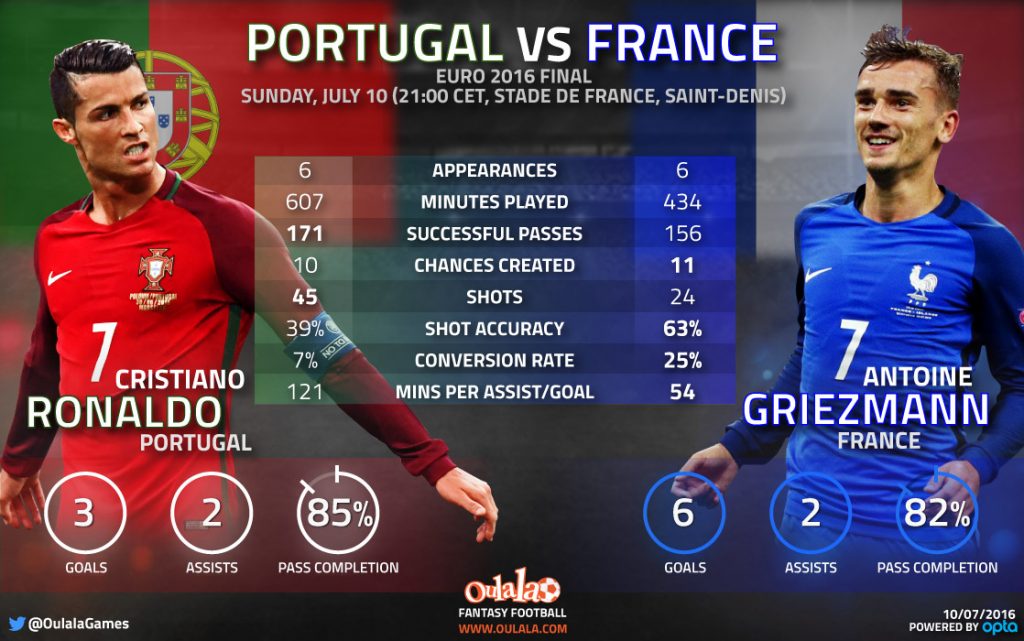 The final of an international tournament has rarely proved to be the most fascinating or engrossing one in the edition but Sunday’s Euro 2016 final promises to be an intriguing clash between France and Portugal, who have been very fascinating to observe, for a variety of reasons.

Despite Antoine Griezmann and Cristiano Ronaldo being their country’s star men, it is the team effort from both set of players that has guided them to Sunday’s final. Here is who makes the combined eleven of the two sides.

The French captain has been the steady ship at the back. Deschamps’ backline had faltered on many occasions in the tournament as his defensive set-up was a weakness, but Lloris was the steady hand at the back and rescued them whenever the need arose.

The Southampton player doesn’t do anything too fancy in his position, and provides a calming presence in the back-line by being a steady performer. It comes as no surprise that the player is being linked with a move to Barcelona, where Dani Alves has left a huge void. Soares has been one of Portugal’s most consistent performers in Euro 2016.

Pepe can massively frustrate anyone who is watching the game (remember Gary Lineker’s tweet recently?) but playing for his country, Pepe is usually more calm. Perhaps it’s also down to the effect Jose Fonte has had on him partnering him at the back. Pepe has the experience and if he cuts out on all the unnecessary antics at the back, he would be a very important player for the final.

Koscielny leads France at the back in superb fashion. He seemingly is more careful and responsible in the national set-up which is probably down to the fact that he knows his teammates are relying on him for big tackles, interceptions and presence at the back. Till Umtiti came in the first team, the Arsenal centre-back and Hugo Lloris were carrying the team defensively.

Thomas Tuchel will be smiling watching Guerrerio play in this tournament. Dortmund did incredible business signing the player before the Euro’s began because he would had a lot more suitors at the end of this competition. The 22-year-old has been fantastic at the back. He plays like a modern full back in his comfortable runs up and down the flank and ability on the ball.

The midfielder has performed very well for Deschamps and his solid performances will probably make the France manager stick with him over N’Golo Kante even after his return. Versatile to play anywhere in the midfield, Sissoko’s style might be boring, but he has been incredibly effective and important in the midfield and it doesn’t come as a surprise that Liverpool, who are without a good defensive midfielder for some years now, are looking at bringing him in this summer.

Well, apparently Manchester United want to bring their old player back for £100m. That sum might be too much for most but it is indicative of the fact that at 23, the midfielder potentially has a decade of dominating top level games in him. Pogba remains a young player packed full of enormous potential. He has had his moments in the ongoing competition and will be one of France’s key men in the final.

Matuidi divides opinions because he has recently had a few bad outings but it would be difficult to refute that the midfielder combines extraordinary stamina with athleticism and he is also good technically. What makes him an asset even if he is having a bad day is his relentless running, the fact that he works harder than anyone on the pitch.

The former Marseille man is enjoying the form of his life. After a successful season with West Ham United, Payet has proved anyone who doubted his credentials — including his national manager — and performed well at the tournament. Capable of delivering a match-winning moment through a brilliant shot and set-piece abilities, Payet would be as important a player as the tournament’s golden ball holder and compatriot Antoine Griezmann.

Goals win you matches, and the Atletico Madrid man has delivered in this aspect. With six goals in as many matches, he has been his country’s main supplier of goals and has created a partnership working off Giroud. His stunning performances have lit up Euro 2016 and he has already scored more European Championship goals than Zinedine Zidane; one more against Portugal on Sunday and he will surpass Thierry Henry’s total. He is already a France great.

The combined eleven wouldn’t be complete without Portugal’s talisman. Ronaldo hasn’t done as well as he would have liked and started the tournament in slow fashion. However, impressive and important performances and goals against Hungary and Wales prove why a player like Ronaldo should never be undermined. He has the ability to deliver a game changing moment. Forgive him if he is unapologetic about that. 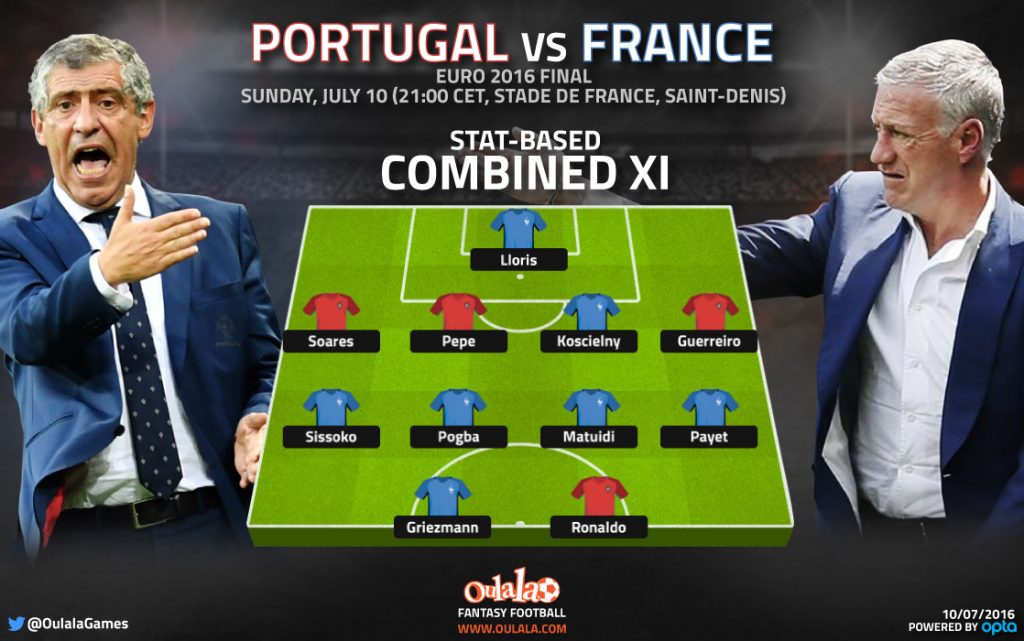