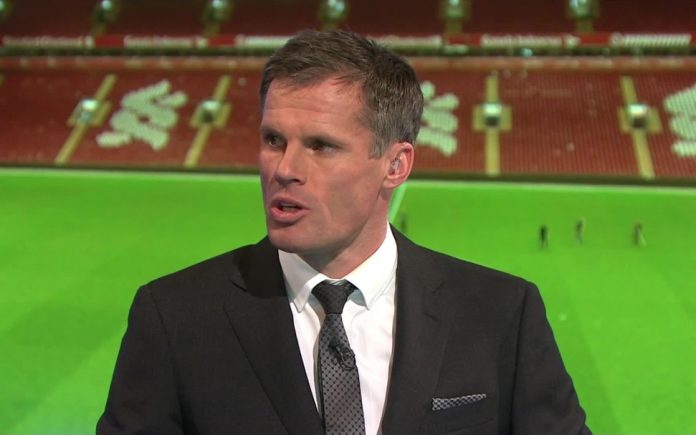 Liverpool legend Jamie Carragher has played down any panic regarding The Reds’ title chase.

Liverpool have seen a seven-point lead cut down to three after drawing with Leicester City last week, and West Ham last night.

Carragher feels The Reds current form is merely a ‘blip’ as the title races hots up going into the last few months of the season. Speaking to Sky Sports, the former centre-back who enjoyed Champions League glory in 2005, said:

“They are a fantastic side as are Tottenham and Man City, but this run that they’re in may just be a little blip but they will come back.”

Carragher also recognises The Reds haven’t experienced a difficult spell this season like their rivals.

“Liverpool haven’t had a blip yet this season. Man City had a spell where they lost three games in four, Liverpool have drawn two on the bounce and Tottenham have lost various games at different times – it may just be a case of that”.

The former England man is also confident Liverpool will put this period behind them. He added:

“Liverpool shouldn’t forget that they are a top side and what we’re seeing won’t continue, this won’t be happening every game. Liverpool will go on a run of winning five or six games at some stage before the end of the season, there’s no doubt about it”.

Jurgen Klopp’s experience is Germany is also a factor that will hold Liverpool in good stead, according to Carragher.

“Jurgen Klopp is massively important and he has a huge influence on what Liverpool are doing. He is the big figure in the dressing room who has been in these positions before. Not in England, but in Borussia Dortmund – probably Bayern Munich or Bayer Leverkusen chasing them down – and he would have had games like that where it hasn’t gone well”.

Carragher remains confident Liverpool will be well and truly in the mix at the end of the season. He said:

The 41-year-old did touch on the impact the Champions League could have on the title race.

“whoever goes furthest in that will have a big bearing – so there is still a long way to go”.

Carragher makes some very valid points. There is still 13-games to go and a lot can happen in that time. In the short-term, City  could go top tomorrow night with a win at The Reds local rivals, Everton.

The important thing for Liverpool is to remain focused. Afterall, they have only experienced one league defeat all season, and are top of the league. More points will be dropped, but the same applies to Manchester City, and Tottenham. The latter of which can’t he discounted of being involved, sitting only five-points behind the leaders.