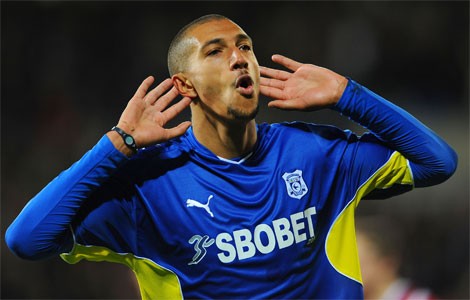 Cardiff City manager Dave Jones believes Jay Bothroyd is worth a “look at” for an England international call-up, after the striker’s superb performance in the latest Severnside derby against Bristol City.

Cardiff, who currently lie second in the Championship, were two goals down within nine minutes against rock-bottom side Bristol, but made a magnificent comeback with both Bothroyd and Peter Whittingham (2) scoring to give the Bluebirds a 3-2 win. Afterwards, speaking to BBC Sport, Dave Jones praised the performance given by his side and highlighted that of Bothroyd himself:

“He was superb against Bristol City. If [he] continues to play like that, then when you’re looking around for a centre-forward for England, he is good enough if he puts in the shift he did today. He is certainly worth a look at.

If you’re looking for someone who, around the box, has a great touch, great pace and can go past people then it might just be the boost the big man needs – and he was magnificent today.”

The Arsenal graduate has played for eight clubs in his career including Italian side Perugia, but has finally settled in South Wales. In addition he managed a call-up to the England U-21 team in 2001, in a 3-0 win against Mexico U-21 in which he scored. He is however eligible to play for Jamaica through his grandparents.

So is it worth the call-up for Bothroyd? After attending each match this season at the Cardiff City Stadium including yesterday’s, I would definitely say he is worth the ‘look at’ Dave Jones suggests. He has the same play-style of Fulham’s Bobby Zamora; confident throughout, picking the ball up in midfield and running at defenders.

Sure the international stage is a whole different scenario to that of the Championship, but no one will find out unless he is given playing time. One of the four upcoming friendlies against France, Argentina, Thailand or Netherlands seem a good option, and if Bolton’s 33 year-old striker Kevin Davies can make it, then 28 year-old Bothroyd can definitely do the same.