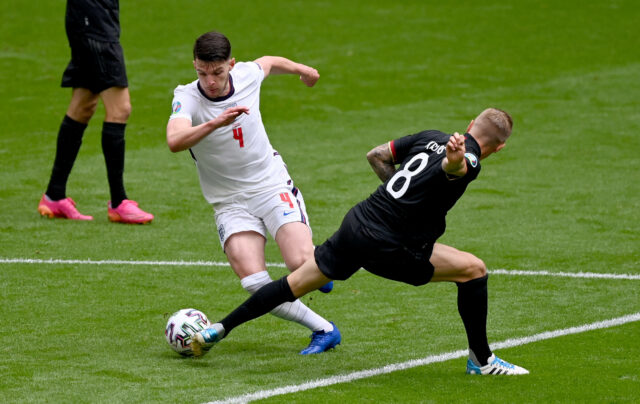 Declan Rice has rejected two contract offers from West Ham already and it has put Manchester United and Chelsea on alert, according to The Telegraph.

Rice, who impressed heavily against Germany at the European Championships, is waiting to see if Chelsea or United make a formal move for him this summer.

He is expected to reject any more imminent attempts to extend his West Ham deal.

Manchester City are also admirers, but the Premier League champions are likely to bid for him next summer if he is available at that time.

The Telegraph suggests that Rice is not even amongst the top earners at West Ham.

Although the two contract deals offer him a significant wage increase, it is still nowhere near what other players of his age, such as Mason Mount, are earning elsewhere.

However, it is not the money that is pushing Rice to consider his future. West Ham did a brilliant job last season to clinch a European spot, but Rice is unsure whether the club has the means to improve the squad.

With his England teammate Jadon Sancho close to moving to United, Rice probably feels it’s time to test himself at a big club. He wants to play in the Champions League and win silverware.

United certainly won’t be paying £100 million for Rice, but they could tempt the Hammers by including Jesse Lingard as part of the bid.

Rice has three years left on his current contract, plus an extra 12 months to run, but West Ham fear his price could drop when he gets closer to the final two years of his deal.