Chelsea have been reportedly linked with a move for Atletico Madrid duo Antoine Griezmann and Koke. The Spanish club is looking to fend off Chelsea’s interest by offering the duo lucrative deals at the club. The Telegraph claim that the Blues would need to pay £100m to land both the players in the summer.

It remains to be seen whether Chelsea make any formal move or not, but one thing is pretty clear, Atletico Madrid will not entertain any offer for Koke. 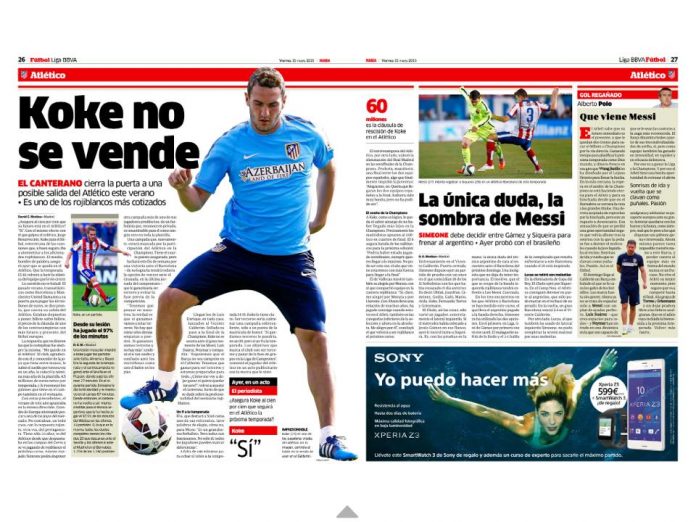 According to reports from Marca, Atletico Madrid have made it clear that Koke, who has a release clause of €60m, will not be sold next season. Plus, the player doesn’t want to move either.

Last summer, Manchester United and Barcelona, offered €60m for Koke, but the Spaniard had rejected such advances. He is happy at Atletico and doesn’t want to leave the club anytime soon.

Koke was asked whether is cent per cent certain that he would stay at the club, the Spanish midfielder replied ‘yes’.

Diego Simeone is looking to build a great squad at Atletico, where players like Koke and Griezmann are the backbone to the side. Obviously a €60m offer or more would be too tempting for any club, but Atletico, having boosted with Champions League money, should resist all temptations thrown at them.

At the same time, Atletico have been burdened with huge debts around the club’s neck and it would take some years (keeping in mind Atletico continues to deliver on pitch) to become a more stable club financially.

Atletico are in safe hands under Diego Simeone and the club can expect to stay competitive and fight for titles in coming years. Koke is committed to the club, and the Rojibalncos aren’t keen to sell him either.