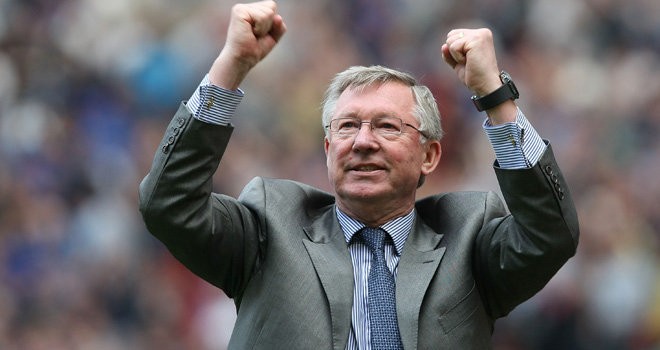 Sir Alex Ferguson was speaking after the Red Devils opened up a nine point gap at the summit of the Premier League table on Saturday lunchtime by beating Everton 1-0 at Old Trafford in a hard fought encounter.

The Red Devils now know that seven points from their remaining four matches will guarantee them a record 19th English top flight crown. And Fergie has urged his players to approach their next two games against Arsenal and Chelsea with a positive winning attitude and put the title race to bed.

“The thing that puzzles me is they (the media) keep saying Arsenal and Chelsea have got to play us still, like we’re going to lose them…why shouldn’t we win those games?”

“As I said to the players, forget all that nonsense. Just try to win your games and you’ll be all right, keep your heads and don’t get carried away.

“There are only four games left and the way they are going about their business gives them an outstanding chance (of success).”

The United boss was also quick to praise Mexican forward Javier Chicharito Hernandez, whose late header proved to be the match winner against Everton after Manchester united were unable to break the deadlock due to a spirited Everton performance.

The exciting young forward continues to exceed all expectations in his first season in English football as he notched up his 19th goal for United this season and his 12th in the Premier League.

“We didn’t expect that (level of performance),” admitted Ferguson.

“We thought a year of introducing him to the club and adapting to English football and strengthening him up.

“He’s done all those things already. He comes in every day at nine and he’s the last to leave, this boy is very dedicated.”

Ferguson is pretty confident and he has every reason to do so, with Manchester United having recently beaten both Arsenal and Chelsea in other competitions. Will they be able to do so in the league as well?