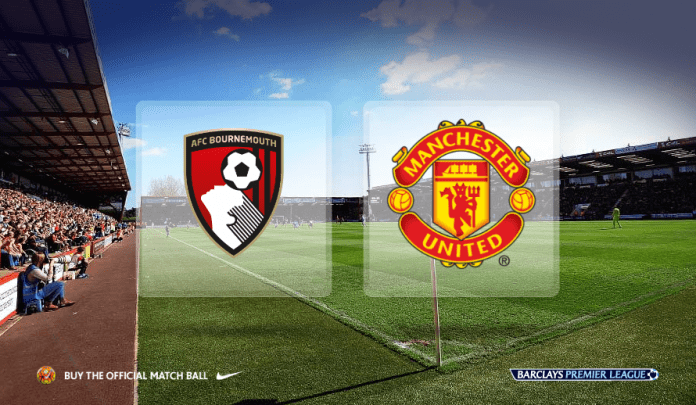 Manchester United crashed out of the Champions league with a 3-2 defeat against Wolfsburg this week and Louis Van Gaal’s side will be looking to bounce back with a win against Bournemouth in the Premier League this weekend.

However, Eddie Howe’s side are not to be taken lightly. Despite their catastrophic form, Bournemouth picked up a stunning win at Stamford Bridge in their last game and will be looking to pull off another upset against an injury plagued Manchester United side.

Bournemouth are without the services of several key players themselves but are seemingly on their way up. Eddie Howe’s side are unbeaten in their last three games and will looking to take advantage of Manchester United’s poor form off late.

Louis Van Gaal’s side are going through a rough patch and have struggled to score goals. The Old Trafford outfit will now look to focus on their league campaign and end their winless streak against the newly promoted opposition.

With several key players ruled out of the trip to Bournemouth, Van Gaal will be hoping for some luck to bail his side out this weekend.

Although Manchester United are considerably stronger when compared to their opposition this weekend, the Red Devils will be without most of their first team players and might just have to dig deep and grind out a result.

Bournemouth are without a number of their best players for the rest of this season and Eddie Howe is used to it by now.

Former Everton defender Sylvain Distin, who missed Bournemouth’s victory over Chelsea through illness is expected to return to the starting lineup

Match winner Glenn Murray could be rewarded with a starting berth against United.

As for Manchester United, Louis van Gaal’s side are in all kinds of trouble at the moment.

Key defenders Chris Smalling and Matteo Darmian picked up injuries against Wolfsburg and are set to sit out this weekend’s clash against Bournemouth.

Guillermo Varela is expected to continue at left-back after impressing in his last few outings.

Paddy McNair and Ashley Young should complete the back four alongisde Daley Blind.

Bastian Schweinsteiger is likely to miss the game through suspension. The German picked up a three-match ban for elbowing Winston Reid.

Morgan Schneiderlin missed out in midweek and could return to partner Michael Carrick in front of the back four.

Wayne Rooney is expected back next week and Juan Mata should continue in the number 10 role behind Martial.

Bournemouth are undefeated in their last 3 matches in the Premier League.