Chelsea travel to the daunting Vicente Calderon on Tuesday night to take on Chelsea in the first leg of the mouth watering semi final in the Champions League. The Blues suffered a shock defeat on Saturday losing 2-1 to relegation threatened Sunderland which severely dented their Premier League title aspirations. Diego Simeone’s side however are relentless at the top of the La Liga table, going six points above their closest rivals Barcelona, who are currently just a shade above Real Madrid. As football fanatics all over the globe wait in bated breath for the enthralling encounter, we bring you the five tactical battles between the two sides that will decide the outcome on Tuesday.

How Chelsea will adapt: One of the major aspects for Chelsea’s come back against Paris St Germain (losing 1-3 in the first leg) in the quarter finals was their awareness and the ability to adapt to any circumstances. Jose Mourinho threw all of his strikers for the final minutes of the games hoping to get the second goal, the one which would enable Chelsea to progress. Demba Ba fund the top left corner for a scrappy finish as Stamford Bridge erupted in joy. Chelsea are sure to lineup in their customary 4-2-3-1 setup with the hardworking triumvirate of Oscar, Willian and Andre Schurrle starting behind the lone striker up front. Eden Hazard missed the opening training session ahead of the clash is set to miss out of the first leg thanks to a sustained calf injury.

Diego Costa against Gary Cahill: This will surely be one of the major tactical aspects going into the clash. Costa has scored 33 goals and raked up 4 assists in 37 appearances so far this season. However, the Brazilian turned Spanish striker has much more to his game than just finding the back of the net. Simeone’s side end to play a very narrow 4-4-2 lineup which is more effectively a 4-2-3-1 in attack. Costa  makes sure he doesn’t get isolated up font as he constantly drops deep and aids possession on the pitch. 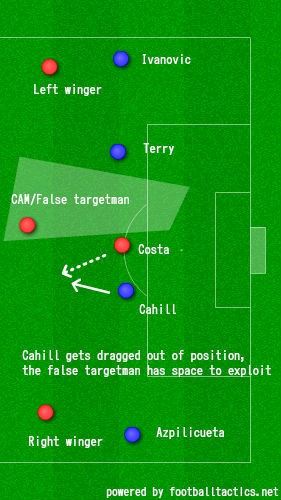 Gary Cahill will be given the job to man mark the striker but the Englishman should make sure he doesn’t get outrun and dragged out of position. This will help the central attacking midfielder, playing as a false target man to exploit the space and come out better one on one against John Terry.

Atletico’s running wide men against Chelsea’s fullbacks: One of Diego Simeone’s greatest tactical advancements has been letting his wide players stay narrow and allowing his fullbacks to run with a mixture of decoy runs and overlapping the opposition wingbacks at will. As the decoy runs off the ball takes away the centre opposition centre back with it, this frees up space for the wide playmaker to dart in. This leads to a snowball effect. The marking centre defensive midfielder has to track the false target man, another centre back is busy occupying the lone striker up front but the other winger’s run from opposite flank frees up the striker. As a result, Atletico’s wide play makers frequently opt to cross  behind the opposition defensive line.

Chelsea’s experience against Atletico’s enthusiasm: Jose Mourinho has reached the semi finals of the Champions League for five times now, while it will be Simeone’s first as a manager. Tactically it would be interesting two of the brains on the sidelines are in action. Sami Tighe, featured columnist for Bleacher Report claimed that Atletico’s hardworking 4-4-2 is easily the most frustrating, stubborn formation in world football right now. They sit deep, pack the middle, man-mark the wide men and tell the opponents’ full-backs: “cross it in—if you dare.” Mourinho however, will instruct his team’s attacking triumvirate drop deep and realize their defensive discipline and not allow the home side much time on the ball, lest they will be devastating.