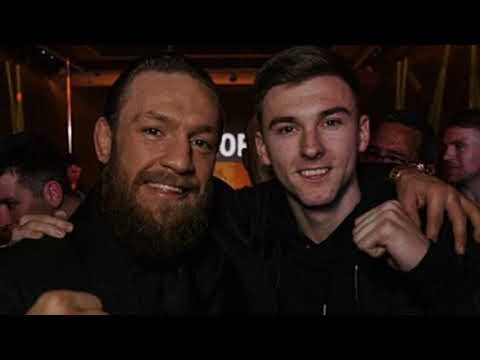 Conor McGregor’s future in combat sports is currently up in the air following his loss to Dustin Poirier at UFC 257. Might he opt to retire from the octagon, or will there be a rematch with Poirier? Could he return to the boxing ring, or perhaps enter into the world of professional wrestling?

While there’s much uncertainty with McGregor’s career choices, he’s not weighing several options when it comes to naming his favourite footballer. While the Notorious One, a Manchester United supporter, admits to soft spots for Irish countrymen Roy Keane and Robbie Keane, as well as a healthy respect for Juventus and Portugal superstar Cristiano Ronaldo, when push comes to shove – as it often does in McGregor’s line of work – he’s of a single mind when it comes to identifying his top football star among current players.

McGregor is a fan, and as it turns out, a friend of Arsenal defender and Scottish international Kieran Tierney. The two actually first met while attending the same UFC event in Belfast in 2017. As both are fans of the action in the octagon, it seems a safe play to assume that they will be getting into the action later this month at UFC 260 in Las Vegas.

McGregor revealed his fondness for Tierney when asked to name his favourite footballer during a press conference before one of his UFC bouts.

“He’s been a phenomenal supporter of mine, he’s been supporting me every year,” McGregor said of Tierney. “And he’s rose up – he’s a phenomenal, phenomenal football player.

“I am in conversation with him a lot. He is a great guy, a good kid and I’m rooting for him.”

There was an instant connection when Tierney and McGregor met at ringside while both were attending that UFC card in Belfast.

“He was there supporting his friend who was fighting, and I was there because I was injured at the time,” Tierney told the Times. “I was ringside next to him and got chatting to him for 10 or 15 minutes. I got a signed glove from him and a t-shirt as well.

“Conor’s my biggest hero outside of football, so it was amazing. I’m a massive fan of his. I think any athlete can relate to him.”

Tierney suffered ankle ligament damage during training with Celtic late in October of 2016. The injury put him on the shelf for three months and ultimately led to his meeting with McGregor and the close relationship the two have since developed.

However, it was another injury suffered by Tierney, which really showed him just how close he was with the MMA star. Tierney endured a hip problem in 2019.

“Throughout my injury, Conor McGregor was brilliant with me,” Tierney told the Sun. “He has a programme he does on the WattBike that helped him get fit, and he was giving me tips on that, which was great.

“I was doing work with the Celtic physios anyway, but I found out what Conor’s programme was on the bike and had a look to see if it was similar.

“I was still doing Celtic’s programme, but the tips from Conor helped too. I don’t know how my results compared to his, but it was pretty good.

“It was just brilliant to hear from him. When you are injured, you always feel a bit lower than usual because you are not out on the pitch training with everyone.

“So to hear from your hero and get advice from him lifted me that wee bit.”

Tierney also found out through McGregor’s mates just how much the Notorious One admired his game on the pitch.

“He came over to Glasgow for a question-and-answer thing he was doing, and I got talking to his mates, who said he’d love one of my Celtic jerseys,” Tierney recalled. “I sent a few over for him and his mates, and the next thing I know he sent me a message saying thanks and posted a photo on Instagram.

“Honestly, I couldn’t sleep that night. He posted the picture at around 10:50 p.m. and I was sitting there thinking, ‘no way’. That was me up the full night, and then I went buzzing into training.

“It was just brilliant to hear from him.”